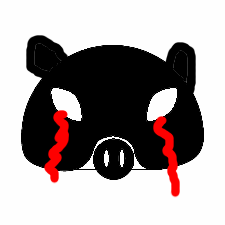 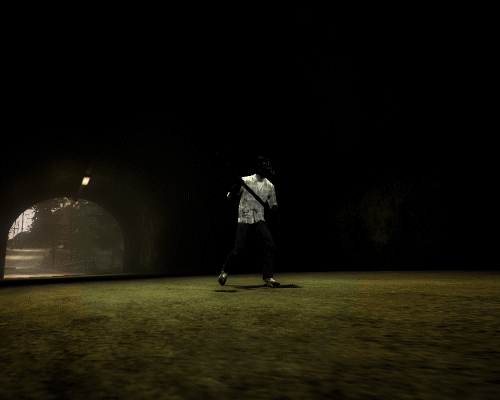 Our wisdom tastes so painful. Endure and observe.

Transmit - initiate the tensed sequence. Receive - Initiate the audio sensory - IN THE COLD WOODS OF AN AMERICAN WILDERNESS - initiate mental protocol - INNER ILLNESS HAS BEEN DIAGNOSED - initiate the scan of the flowing filth - 101 NO ACTUAL CURE HAS BEEN FOUND - initiate overall overview of the subject - venture deep into the depths of the subconscious - ENDURE - the one known as Leather Jacket.

A solitary man wanders aimlessly in the wilderness of the States, armed with a hammer and fistcuffs, keeping away any unfortunate traveler that is to accidently approach him. A madman and a threat to civilization wanders around the wilderness with no hope or despair. His pig-shaped mask symbolizes his hostility towards anyone that is foolish enough to pose a threat to his escalating illness, that has built a financial empire over his poor brain, causing him to make voices that sound like the squeals of a disturbing boar.

WITNESS - The might of the leather-wearing, physically human, occultly a pig.

An adult man standing in front of a human corpse, stealing its possessions and eats it with delight. Tasty human flesh.

Food is good for the body, especially when you have no job to allow you buying it. Hunting therefore a fitting option even for a human that hunts anything that contains meat and is tasty.

WITNESS - The traumatized childhood of Jason March, whereas a little kid he got squashed by several female adults, unintentionally, when he was taking the bus and decided to take a nap until the station arrives.

ENDURE - the density of being a small being, get squashed by several bigger beings, and remain in this state of minimal air, as they are unaware of your unfortunate existence beneath them, unable to do anything until they would reach their station of choice.

IMAGINE - yelling inside, while the yells are mistaken for socially-awkward farts, arousing voices of laughter and of social recreation.

AFTER A FEW HOURS - Jason has woken up from his unintentional hell, only to find the experience, forever scarred in his mind, tearing apart his naiveness and his childhood-like nature.

ALL ALONE WITH THE NEWLY-CREATED DEMONS, the murderous pig-breathing, stressfully-squealing, head-banging, disturbingly-laughing leather-jacket wearing serial killer was born from the ashes of the kid that once desired to nap in public.

ESTIMATING STRENGTH - Logical compensation detected. Too many people in the world; people that can sit on you due to density. Therefore the population has to be decreased in the name of fluent air through the passionate nostrils. No one would choke him again.

THE STOMECH of Leather Jacket grew hungry one day, and he had no place in his burrow to store any food for days to come.

Therefore he KILLED 2 THOUSENDS AKA'BS, beasts native to Solomon Island, a job that took NUMEROUS HOURS, some of which WERE EATEN ALIVE.

The locals of Solomon Island have noticed his intimidating ACT OF INFAMY, and thereby granted him the nickname THE EXTERMINATOR, in order to prevent people from STANDING IN HIS WAY, should they hear the title.

This is his theme song: The Smashed That Smashes https://soundcloud.com/leather-jacket-254421495/the-smashed-that-smashes