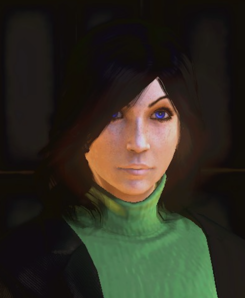 Saoirse Quincy is a studious and determined worker. Her unwavering resolve to settle problems is unprecedented, and is known to work late hours to complete cases in the past; this is in part due to her desire to give those wronged the justice they deserve. Her ability to spot patterns and extract information through observation has proven reliable, and she places a great deal of confidence in said skills. She has been noted to engage in verbal witticisms, though her serious nature may cause others to interpret these as sarcastic or harsh.

However, Saoirse's mindset can create conflict with others. As a serious and rather grumpy individual Saoirse doesn't have the patience to deal with those who would rather fool around, and is easy to irritate. She is also quite pessimistic, thinking the worst of a scenario first. Once one gets under her grumpy and serious exterior, they find a woman who deeply cares for others, and can be rather reckless when it comes to saving those who are close to her.

Born May 21st, 1990 to Fiona and Cain O'Conner at Frederick Memorial Hospital in Frederick, Maryland.

Due to her father's job in the computer technology industry, they moved to California in 2000 and has been there ever since. She graduated from highschool in 2008 and went to California State University in Long Beach, CA for a major in Criminal Justice. It was during this time she met [REDACTED].

After graduating she joined the Los Angeles Police Department and worked her way towards being a police detective. She was also dating [REDACTED], who got a job with the CDC.

The bomb changed everything.

With the terrorist attack in Tokyo, [REDACTED] was sent out of state to deal with a potential biohazard on the east coast. He was only supposed to be out there for a couple of days, a week or two at most.

Saoirse, now a police detective started to realize [REDACTED] was MIA after a couple of days of radio silence from him and started spending her free time looking for him. She tried everything....last known contacts, databases that she could access...but nothing yielded any results. Six months pass...

And then one night she dreams. Dreams of an unknown plane where two sides whisper about the voices..about choices she has yet to make. They speak of patterns and monsters....about darkness and the dawn of a new age.

She wakes up screaming and coughing.

It takes her time to adjust to her new abilities, floating in and out of consciousness, darkness consuming her each time. But one time she heard another voice....distorted but different from those she heard before. And she started to learn how everything works very quickly...as if she had done this before.

That was when The Dragon found her and whisked her away to become part of their models.

Ways to contact me if you wish to RP with Saoirse:

Art of Saoirse or Screenshots will go here so you can get more of an idea of what she looks like! Please note that artwork displays a more accurate representation of what Saoirse looks like compared to screenshot work!