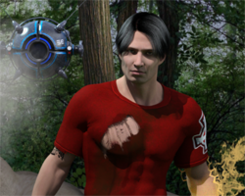 The Templar legacy of the Kole family goes back generations. The family's first membership with the Templars goes back to the late 1730's with their first member, Lucien Kole. The Koles served dutifully under several "renaissance" and reinventions of the order. They moved into what would become their ancestral home several kilometers outside of Loughton in the early 1790's. The family had dedicated their lives to serving the Templar dutifully and unquestioningly.

This changed when John became old enough to join the Society. He joined at the age of 18 and out of a sense of obligation to his father and his family. His heart was never in the work, however. He completed his missions and did what was assigned but he lacked the conviction that even his younger sister Vanessa had. His identity didn't rest upon his name and the legends and legacy of people that he'd never met, nor had anyone else. He was determined to make his own legacy.

He had started his studies at Cambridge University. Old money had long reaches even though his A-Levels had been more than exceptional, something that happened frequently when he decided to apply himself. John had started studies into the broad field of Archaeological Research. He was sure that his father would bristle at his obviously poor choice. He was mistaken and his father supported him in his endeavors. This was more calculated than supportive on Alexander's part; a twist of the psychological knife.

John put his studies on hold two years from the completion of his program and went back out into the field, joining the Scarlet and Cross Institute, which his father headed from the background, and leaving it after only a few months, determined to get out from under his family's shadow. To his surprise, his sister joined him and became a Senior Consultant. John was happy to investigate and stay as a low rung employee. There were only a moderate number of expectations, which allowed him to follow some of his interests.

The other thing that had vexed his father was that John, while not wanting to be bound to his blood, immensely enjoyed the benefits that came with it. John loved to travel. John loved women. Most importantly, John loved adventure. Those tales are for an entirely different time. They are many, varied, and in various degrees of workplace safe.

One such adventure found him at the bottom of a crevasse, lost in the Himalayas. The date with a Dragon several nights before had sparked a competition amongst them. This competition found them both climbing to the summit of Makalu, the Great Black. Somewhere along the border between Nepal and Tibet, the two raced without a plan, without gear, with only the arrogance and hubris that comes with knowing that you are nearly immortal.

John didn't die when he fell through the thin skin of ice that covered the crevasse. He lay at the bottom, broken and bleeding for days until he finally expired and returned to an Anima well. The experience changed him. He realized that he needed to take this life much more seriously. He returned to Cambridge and finished his studies. Along the way, he discovered that he'd acquired an innate ability with technology. He's recently rejoined Knightsbridge Consulting with a bit more maturity and knowledge, but still that incorrigible flirt.

John is a Bee like many of his compatriots with many of the same benefits. He's incredibly hard to permanently kill. He's able to manipulate Anima and he's able to travel through Agartha. However, his Anima has manifested differently than many others. Rather than being able to project his Anima it has focused inward, enhancing his physical abilities. When he focuses his Anima he becomes incredibly strong and nigh-invulnerable. He's able to lift around 850 pounds(385kg). He's able to swing his hammer with ease, twirling it one-handed when he decides to show off. His Anima hardens like armor, deflecting most blows with a minimal amount of injury. At various points he's taken an RPG to the chest, had a column that had pinned him down blown off using C4 and hundreds of bullets that left shallow wounds that healed quickly.

To a lesser degree, his reflexes and hand-eye coordination is improved as well.

He's recently developed an intuitive ability with electronics and machinery. He's able to build almost anything out of whatever parts he can scrounge up in the area. This ability started developing about six months ago (As of Oct. 2018). He started building simple devices at first and has developed into able to absently construct somewhat useful devices. Their usefulness seems to vary from something that cleans your clothes instantly to something turns your hair pink for three days. He often doesn't know what these particular devices do until you press the button that they all seem to have built into them.

For all of these benefits there are a few drawbacks. Due to his Anima focusing inward he's unable to project his Anima at all. He'll never be able to use any form of magic and he's unable to infuse his weapons with his Anima like other Bees can. He's unable to use Anima Wells in the same way that other Bees can. He requires an Agartha Conduit in order to manipulate his Anima to use the wells. If his conduit is destroyed or damaged significantly he'll have no way to escape or travel quickly. This left him at the bottom of a crevasse in the Himalayas for several days before he finally expired. This raises another issue that John has; it takes him much longer to come back after he dies. After the incident in the Himalayas it took him nearly a week to return. He's come back much more quickly at other times but that is just one example of this.

John's going through several iterations of his hammer over the years. One of his favorite designs was simple and rather inelegant, essentially a block of titanium at the end of a handle. His most recent hammer is designed for effectiveness and utility. This latest hammer is made from Inconel, a superalloy of austenite, nickel, and chromium. It can endure extreme conditions and high temperatures. The material is perfect for his many duties in varying climates including the Hell dimensions. The backspike is perfect for breaking armor and chitin from the various denizens of the Secret World. The head of the hammer weighs close to 20 pounds and is much denser than the former titanium hammerheads that he's used.

John is incredibly hard on firearms. He's had a habit of using his shotguns as a club should he run out of ammo. This has led to many bent and mutilated shotguns over the years. His current favorite is the Benelli Supernova. The shotgun is highly modular and can be outfitted for most situations. At the heart of this new pump gun is a lightweight steel skeleton framework over-molded with a high-tech polymer, making the SuperNova Tactical super-light, super-strong and almost completely impervious to any weather condition. This is important in his line of work where nearly anything is possible to encounter. As John's abilities leave him to rely on mundane weapons that doesn't mean that he hasn't found ways to compensate for this. John uses special shells lending versatility to his loadout. 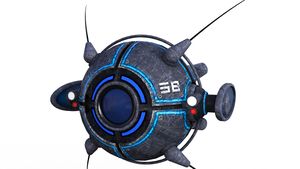 Sparky in his normal Chassis