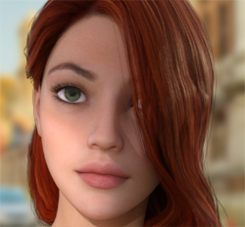 Vanessa was born into the influential Kole family. The Koles have served the Templar dutifully for several centuries. The family has also had great financial success in the last several centuries as well. Trading, importing and various other merchant activities ensured a comfortable position and their Templar ties provided them land their ancestral home in Loughton.

Vanessa and her brother John were brought up fully immersed in the secret world. Their father shattered the illusion early and they grew up knowing that the Boogy Man and Spectres are a fact. Alexander Kole was never considered a kind man, but his demeanor turned colder after Vanessa’s mother died in childbirth. He became more goal-oriented and devoted himself more to his work. This often left the Kole children in the care of nannies or each other. They amused themselves and John grew up to be her best friend. John was four years older than her and he begrudgingly joined the Templars, though his often rebellious behaving simply carried over to his Templar activities.

Vanessa is very attuned to Magic. In addition to the various “hedge magic” rituals that she picked up through her studies and explorations, she is very magical in nature. She’s both fully capable and powerful in all three of the major forms of Magic (Blood, Chaos, and Elementalism), Showing an affinity for Blood and Chaos magicks.

In addition to her magical abilities granted by her Anima she is a veritable walking encyclopedia of the occult. There’s not much that she doesn’t know or has the books to find out if she doesn’t happen to. She spent a fair amount of her years buried in books and in libraries. Most recently she’s taken to exploring, taking her brother John with her as she looks for relics and folklore from long past civilizations.

As mentioned before, Vanessa is incredibly attuned to magic. This manifests by changes in her appearance and demeanor as the seasons change. These changes have been noted and described below and seem to start transitioning after the appropriate Solstice or Equinox:

Spring: Vanessa seems very happy, bordering on manic at times. She dresses in bright colors and her eyes seem a more brilliant green, her hair much more red than her normal copper tresses, resembling a flower coming to bloom

Summer: In the summer, Vanessa seems very relaxed and laid back. Her demeanor has been described as ‘breezy’ at times. She wears a lot of relaxed clothes, one such favorite outfit being a white peasant skirt and a pink sleeveless top. She enjoys the sun and can’t turn down a trip to the beach if one presents itself where she can be found sunning herself like a lizard on a rock.

Autumn: Autumn Vanessa is more subdued but her coloring is more vibrant. Her eyes greening, her hair is like fire, a brilliant orange with blond streaks running throughout from her time in the sun during the Summer.

Winter: Unfortunately Winter Vanessa is more quiet and withdrawn. Whites and blues are her color pallet. Her hair doesn't have the life that it normally does, laying a bit flatter without the volume it has at other times of the year. Her eyes are duller, almost looking more blue than green. She’ll often find solace somewhere comfortable and weather the season like an animal hibernating, waiting for the Spring to come again and life to return.