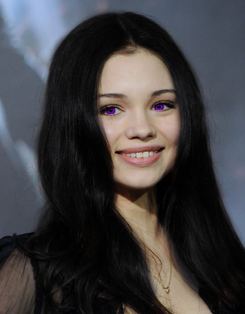 Isabella is a witch. Her magic is in her blood, inherited from her ancestors. The Templars claim she is the descendant of witches, as they managed to track her family to Salem, with one female member of the family being present during the witch trials there. There were no records of the woman being tried as a witch and burned at the stake. Then, a few years later, the same person shows up in the 1700 census of Kingsmouth on Solomon Island before, a decade later, appearing in what would become the state of Ohio. Her family remains there until the early 1970's, when they suddenly split apart, with the older generation moving to Australia and the younger generation moving to a remote valley in Montana.

Isabella was born in Montana to an American father and an Australian mother. Her father is the child of the younger generation that stayed in the US when the family split. It is unknown if her mother has any relation to the Australian chapter of Isabella's family, but it might not be a coincidence. Isabella had a normal childhood and did not grow up around magic. Either her parents had no magical talent of their own, or they simply did not teach her about it.

Early 2014: Isabella's inherited magic seemingly activates after she encounters a bright golden light in the middle of a forest in Montana. The next day, she starts to cast magic without intending too; objects fly into her hand when she reaches for them, sometimes across whole rooms. After a week, when her eyes turn purple, she runs away from home.

Mid-to-late 2014: Isabella encounters an occult coven in Michigan, and spends time with them for several months, during which she learns some blood magic.

2015: Isabella is accused of being a witch by a zealous, religious community in a remote area of Michigan. They form a mob and chase after her with torches and pitchforks. Isabella is forced to use her magic to defend herself, which is caught on tape and uploaded to the internet. The Templars catch wind of the event, and bring her in before managing to scrub the video from the internet. The Templars begin training her thoroughly.

January, 2018: Isabella is deployed to Solomon Island by the Templars. After eight months in the field, she seeks employment with Knightsbridge Consulting.

October, 2018: Isabella begins training with assault rifles. After discovering she has an appreciation for guns as well, she acquires a fairly large amount of them.

Isabella is trained in Japanese swordsmanship and, as a complement, Krav Maga. She is also trained in the usage of handguns, but prefers fighting up close as she is better at that. She has been training with assault rifles for a few months.

Using elemental magic, Isabella is able to cast a lightning bolt and channel lightning through her blades. Her skill in fire magic is very minor as she is only really able to use it to light candles and campfires.

Physical augmentation: Isabella is able to boost her speed and strength by magically feeding on her enemies blood or by drinking the contents of a potion that is pre-prepared using her own blood. Directly feeding on blood is more potent, but causes mood swings as well as faster exhaustion. Using a pre-prepared potion is far more stable.

Energy potions: She can also create potions that ward off sleep/exhaustion by enacting a ritual that includes vials filled with her own blood as well as sleeping. Rest is magically "stored" in the blood in the vials while sleeping. When consumed, they allow her to regain energy and stave off the need to sleep for the same amount of time she slept during the ritual. Using these energy potions excessively causes negative consequences like insomnia and addiction.

Blood bullets: Hollow bullets containing some of Isabella's blood. When the bullet hits a target, it shreds and deposits Isabella's blood in the body of the target. Isabella can then, for about fifteen minutes, sense the location of the target through the presence of her blood. She has also recently begun practicing with causing her blood to act like a non-lethal poison to paralyze her targets.

Telekinesis: Isabella's signature skill is her powerful talent for and skill with telekinesis. It was the first magic she ever cast, and she gained control of it without any tutoring.

Glamour spells: Isabella is able to cast fairly simple glamour spells. For example, she can make others perceive her eyes to be blue, not purple. This has a range limit though, and so far, she cannot fool technological devices like cameras.

Magical dry cleaning: Using magic, Isabella can clean her clothes while still wearing them. Very useful in the field.

Advanced ballistic face mask that also functions as a sealed gas mask. It "breathes" allowing sweat to evaporate and increases comfort for the wearer. The eye slits have bulletproof glass with a heads-up-display capable of displaying a number of parameters. The glass is also reactive, protecting against bright lights that would make it difficult to see.

A katana with a white wrapped handle.

Tactical katana. Isabella usually brings it with her into the field when combat is expected.

KM2000 Combat Knife. This is the dagger Isabella carries during everyday life as well as in the field.

Throwing knives. Isabella has two or three on her during everyday life, and always brings more into the field.

Each of Isabella's guns have a microcomputer installed. This microcomputer is capable of counting the amount of rounds left in a magazine and displaying the number as a hologram on the side of the gun.

Lithgow Arms F88 Assault Rifle. Her mother's old service rifle. Her mother had smuggled it into the US. It was given to Isabella on her 19th birthday when she visited her parents.

CZ 805 G1 underbarrel grenade launcher. For use with the assault rifles.

Custom Hudson H9 Pistol. 9×19mm Parabellum. This is the pistol she carries during everyday life and in the field when not expecting combat.

Fully functional replica of Albert Wesker's Beretta 92F Custom 'Samurai Edge' from Resident Evil 5 9×19mm Parabellum. It is personalized in that it says "Isabella. M. Model O1" on the other side of the slide, and not "Albert. W. Model 01". It usually has a Steiner DBAL-PL (Dual Beam Aiming Laser Pistol Light) on the rail.

FN FNX-45 Pistol with a stainless steel slide. 45 ACP. This is the pistol she usually carries during combat operations.

Isabella owns a number of tactical attachments for her guns.

Information that is IC but would not be widely known, if known at all.

Isabella has a unique mental condition that activates when certain prerequisites are met. If she is participating in a fight to the death, she may acquire a fierce bloodlust. The bloodlust and a brutal sense of justice may also activate whenever she encounters a sufficient amount of evil; for example, human criminals who harm innocents for their own deranged enjoyment. When the mental condition is active, Isabella becomes almost psychopathic and thoroughly enjoys killing those she percieves as evil. Despite that, she does not lose control of her actions, as she does not have a difficulty with differentiating between friend and foe, or between innocent and evil. She can also manage to stop herself and return to her normal state of mind, although that takes a large amount of mental effort.

Isabella's parents are related by blood; they're aunt and nephew. They grew up separately and did not meet until they were both adults, whereupon they fell in love, married and had Isabella. They are still happily married to this day.