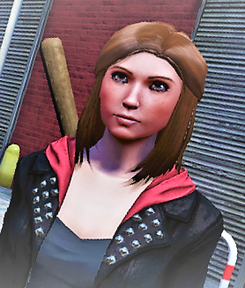 Willow grew up in a small town in Nevada. She never did well in school and ended up dropping out completely at sixteen. She has never had a real job and spent most of her childhood playing video games and being with her family.

As far as Willow knows Gaia did in fact send a bee for her. But it was discovered when her alarm clock went off and she immediately crushed it upon waking up due to her bee allergy. She did not know that it was not a normal bee. Eventually she is in the laundromat in New York and overhears someone talking about a conspiracy theory forum they found and how interesting it was. Intrigued she went home and went right to the website. Upon creating a forum account she received a private message from a user with only numbers in the name and was linked to a chatroom. There, she met people from the secret world, both sides unknowing that she was not like them. However as time goes on she discovers what kind of people she is really dealing with and decides to get out of it while she still can. During a return trip from Oregon she was passing through her home state where many brush fires start up every summer, but this was no normal fire. For it gave chase to Willow who when she noticed began to drive down the road as fast as she safely could. She got a hold of the folk in the chatroom from before and one of them came to assist her. Before she knew what was really going on Willow passed out and awoke back in New York. She later meets up with two other users from the chat in the NY park where they then introduced her into the secret world, barely scratching the surface.

If Gaia chooses to send her another bee is anyones guess. She may never do so.

Willow can be extremely lazy, but when she does get to work she becomes a perfectionist. It's quite similar to her situation with people in fact. When it comes to people Willow would much rather be sitting at home with her pets playing video games and watching shows or movies but when it does come down to social interaction she becomes a social butterfly. It would seem that she learns quickly seeing as even though she is not academically knowledgeable she does happen to be very street smart. At times Willow can be a bit overbearing by making jokes at the wrong times. Despite her tough girl/smartass attitude she is extremely sensitive and has a "White Knight" mind set.

Willow has become friends with several folk in the secret world chatroom she frequents. Even going as far as to invite them to meet in person. Some of those include:

SPECTRA - The woman who welcomed her into the community

Tungsten - Another girl around her age

Rhymia - Someone Willow sees as a mentor in a way since she gave her shelter and is teaching her about the secret world.

Video games. Music. Food. Being a smartass. Her cat. Her puppy. Rolliepollies. Animals. 4-wheeling. Airsoft. Being all that and a bag of cheesy-poofs. Space.