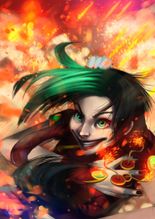 Keiko is a short girl with youthful facial features. Her hair is a verdant green with the texture of an odd mix of normal human hair with the fur of a cat. To those able to perceive past her glamour thick black whiskers can be seen protruding from her cheeks. She sports a surreal Cheshire cat grin even when the rest of her face appears to be at natural rest. Physically she is slight bordering on underweight. Her breasts are effectively flat and her hips lack any kind of curve at all. Unshaven body hair can be spotted on her legs and arms, as well as downy fur about her cheeks. She speaks in a jittering New York accent muddled with traces of her Tokyo origin. She is ethnically Japanese.

Like many members of the Korinto-Kai Keiko is covered from head to toe in enchanted tattooing. 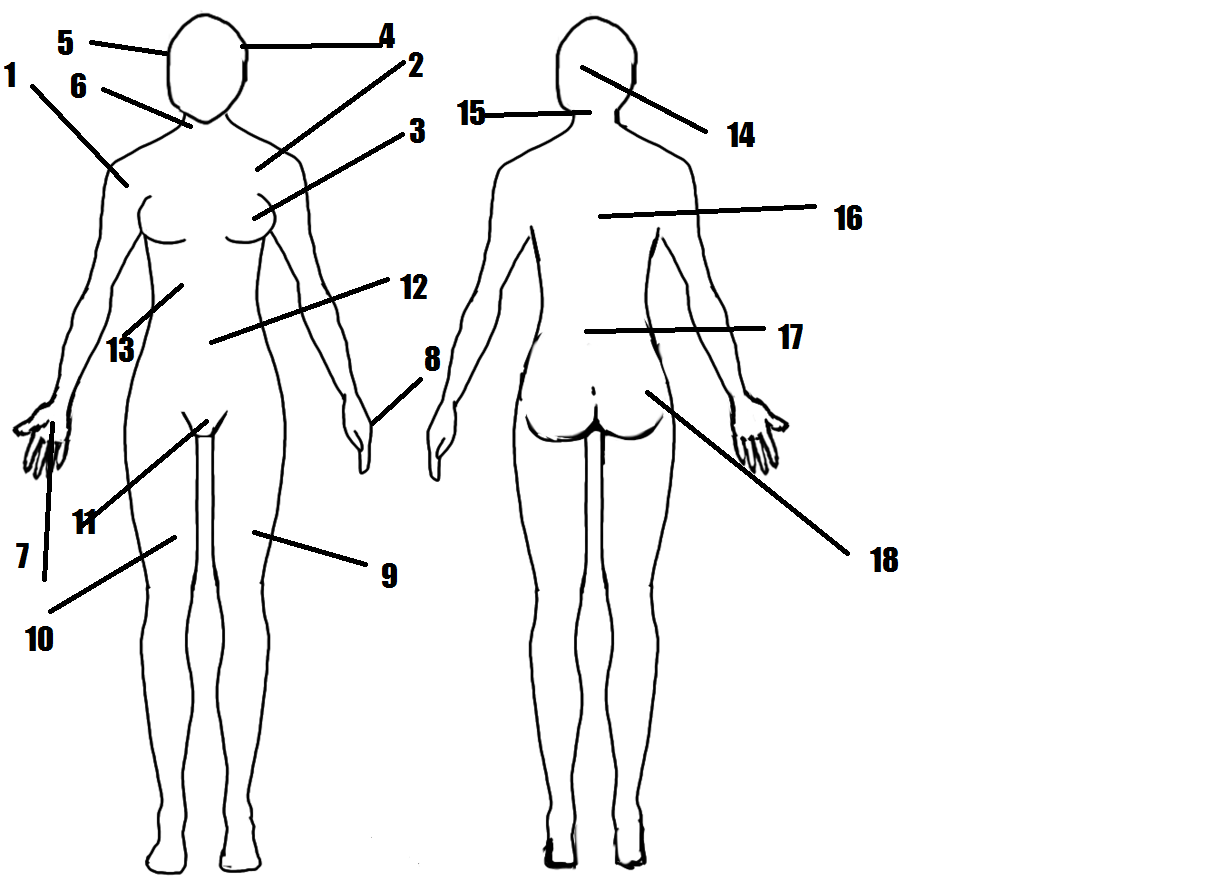 1) Traditional Yakuza tattoo that runs from her right shoulder down to the wrist, the design is of Emerald butterflies being chased by a cat that has mad devil may care grin. The cat's tail twirls at strange angles all along the arm.

2) On the other arm she has a second Yakuza tattoo of an oriental dragon holding a golden orb. The dragon seems to have a rather strange glint in it's eye and on close inspection the orb he is holding is actually a golden lucky 8 ball.

3) Her breasts are also traditionally tattooed, this time with various floral patterns moving outward from the nipple. Both nipples are also pierced with small silver rings.

4) Left skull, a classic "Anarchy A" tattooed to the scalp in black ink.

5) Right skull, a small cartoon Mickey Mouse knocking on a door with the caption "No body home!" above it.

6) Neck, inked to look like her throat has been slit and blood is pouring down from her throat towards her chest.

8) Knuckles, "Good" on the right, "Luck" on the left. Little dice and playing cards are also marked on various parts of her fingers.

9) Black tentacles bubbling up from filthy foam all along her left leg, reaching up toward her torso.

10) A green python curled all the way around her right leg with the face appearing at the front of her right thigh. Unmistakable to those in the know this is clearly the head of the Dragon as used in official faction uniforms.

11) Pubic region, a cheery with a lit fuse ticking down towards it. The words "Blow me!" are written just above this.

12) A roulette wheel, all the numbers are replaced with "Die" in black and "Live" in red. Instead of a silver ball little black comic style bombs are spinning around.

16) Massive fresco tattoo of Keiko herself painted as the "Hanged Man" tattoo with a rope around her neck, crossed wild eyes, her tongue lolling out from the side of her face and a wide surreal grin. She's naked, sans the tattoos of her real body, and in the left hand holding the playing cards 8,9 and 3 of the suit of Diamonds. In her right hand she's holding a pistol pointed towards her own head. A caption is written beneath the picture "We're dead already!"

18) Her rear has been tattooed to make a love heart when viewed from a position of being bent down on all fours. On the left cheek the word "Bad" is written and on the right "ass" 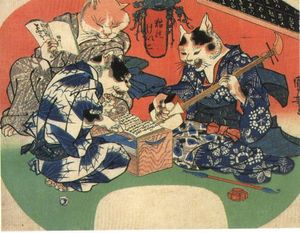 The Yokai are magical creatures or spirits distinct from Oni in being native to Gaia and unlike ghosts in that they are often non-human in origin. Examples include a wide variety of semi-humanoid animal creatures such as the birdlike Tengu and turtlelike Kappa. Though some may be particularly malevolent or kindly, in general they are neutral creatures whose behaviour towards humans depends on how they have been treated in the past. In this sense they are similar to the European fairies.

According to folklore the "Bakeneko" is a cat that having aged a certain amount of time, having been the victim of some mistreatment by humans or perhaps simply by growing to a size beyond that expected of normal cats. At first sight they may appear as simple innocent house cats, yet being possessing great magical affinity are able to change their shape at will to walk among humans often killing their own masters and taking on their form. As they continue to age they may grow in size until they grown to monstrous proportions able to hunt and devour humans. Bakeneko are usually seen as creatures of mischief and ill will, prone to merriment among their own kind but likely to bring misfortune upon their human masters. Identifying a bakeneko in human form is almost impossible, though it is said that if a napkin is presented they will feel compelled to place it upon their head and dance gaily. When seen as cats they can be known by their exceptionally long tails.

The Bakeneko and the Korinto-Kai

The Korinto-Kai have a long standing relation with the bakeneko of Edo, or as it is now known Tokyo, dating back to the time before their formal establishment when they existed as the wandering Bakuto. In the mid-18th century many Bakeneko found themselves driven towards life in the rapidly expanding cities. Without any true human skills to sustain themselves many Bakeneko took to the life of prostitution as they were easily able to change their shapes to alluring women and enjoyed the doting gifts their clients would bestow upon them. However the public profile risked exposure and it wasn't long until clients began to whisper of waking from their rest to perceive the once-beautiful woman who had lain beside them now with the face of a cat. In order to maintain secrecy and avoid the persecution and hunting of cats that often followed when suspicion about Bakeneko arose, some cat Yokai made compact with the occult minded Bakuto to assist them in covering their tracks. Particularly useful as Clan Jingu saw Yokai as only a slight step above demons. As the occult Bakuto became Yakuza who in turn became Korinto-kai, it was only natural that the Bakeneko prostitutes followed along with them. Some using their natural delight for mischief to expand out into other areas of organised crime.

Janet, her girlfriend (PC: "Four-Eyes") A member of the Illuminati.

TRANSMIT - initiate anarchy signal - RECEIVE - initiate the Trickster frequency - WITNESS - initiate the evolution syntax - THAT MOST RARE AND TRAGIC OF NATURE'S MISTAKES - A sudden meowling in the dead of night - DOWNLOAD - fangs and claws - NEKONEKONEKO - They see what isn't there - PURRRRFECT - If a man may become a beast then a beast may become a man - SHOW YOU A REAL GOOD TIME - wet soil, failing rain and the smell of blood, seat and semen - DON'T HAVE TO TAKE YOUR CLOTHES OFF - initiate Mayhem broadcast - TRANSMIT - 893 - WITNESS - The Seven Year Cat.

An adapted personality based on popular media or popular media based on an adaptive personality. There are a lot of people that look young but are old, I'm sure you're used to that trope by now sweetling. This particular flower has bloomed long past her time, she doesn't even remember when her time was or where she came from. The modern world with it's clinical precision, desire for stability. A thing in its place and a place for every thing. The undeniable find themselves broken up, dissected and placed in neat little draws. She spent some time on the inside, in the Sanatorium. Slipped past the occult watchers, too weak for Templars, too risky for Illuminati and dancing a step quicker than the Dragon's coils. We noticed sweetling, we saw a cat among the mice.

Do you know the story of changelings? There is truth in every myth. Sometimes a child just doesn't seem the same as she did the night before. She stops playing with dollies and starts playing with roadkill. The metamorphosis from the sweet and innocent to the taboo and defiled has always made your species uncomfortable. A mad man counts the law among his sacred obscenities.

The village people were once superstitious, a kitten might be sweet and earn a bowl of milk, a cat might catch rats... but let them linger too long and something grows in their eyes. The villagers would hunt them then, those too knowing eyes with a streak of vicious cunning. A cat aged by seven years becomes something more... They called them Yokai.

Flip the card, there is an inversion for every symbol. Now Hello Kitty waves from the billboards, cafes offer the chance to cuddle something soft and gentle among the razor sharp skyline. What once was a dying breed has gamed the system. Neko cons and cat girls. "Cool costume". The Bakeneko are back.

On the inside, pills to subdue that didn't take effect. Therapy to cure a human mind couldn't stick to the wool clawing elastic. Watching cartoons over and over, learning from humans too mad for the real world.

The Eight-Headed Serpent took a bite, left a venomous mark. But that wound has been purged by the laughing madness of Tokyo's underground psychopomp. Another toy for his island of broken toys. She rides the hurricane. Game. Set. Match. They play together in the flickering neon glow, a laughing boy and his cat.

She's goofy for him, wants to be his moll. Oh but sweetling he's too clever by far, loyalty and devotion are just another game. Like her butterflies she'll always be chasing him, a fan girl with fangs. She plays the machines well, collects the safe house debts. She's berries, the cat's meow.

Welcome to the now sweetling, the shakedown crew thought Tokyo needed a shake up. A cat climbs along tin rooftops and prowls for Purple rats among the docks. But her master has trained her well. To play with a toy without breaking it.

What about this one huh? Little girl lost who wants to play with the big boys, if by the big boys you mean the craziest Yakzua in Tokyo. Daimon Kiyota is trouble Chuck, if you only knew the things I know. This girl has a thing for superheroes, supervillians. She won't talk about it but we've seen her dreams, the dreams of where she was before Tokyo and how she came through it. I owe her one really Chuck, her and her Boss. She knows my origin story Chuck, or at least part of it. I wonder if you'd listen to Mr. Kiyota if you knew too. 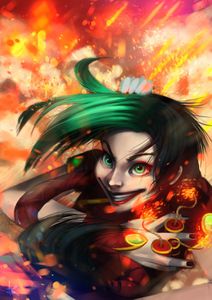 An adapted personality based on popular media or popular media based on an adaptive personality. There are a lot of people that look young but are old, I'm sure you're used to that trope by now sweetling. This particular flower has bloomed long past her time, she doesn't even remember when her time was or where she came from. She spent some time on the inside, in the Sanatorium. Slipped past the occult watchers, too weak for Templars, too risky for Illuminati and dancing a step quicker than the Dragon's coils. We noticed, sweetling, we saw a cat among the mice.