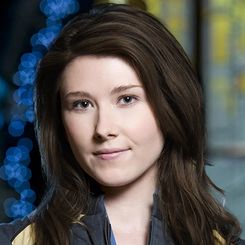 Jennifer stands just below average height and is slender without being particularly toned - she's evidently more at home in a lab than out on the field, and though she does conduct field research, she prefers to go as part of a (much better armed and much more highly trained) team.

While her experiments in gene therapy, and eventual goal of creating some kind of chimera that can rival Gaia's Bees and bolster the Illuminati ranks, have earned her the nickname 'Doctor Moreau', this grim moniker really does not suit her personality. She's cheerful and optimistic, and though she does tend towards sarcasm, she would describe it more as 'affectionate ribbing' than acerbic wit.

Jennifer has a well-documented interest in transhumanism - which first brought her to the attention of the Illuminati - and a love of sci-fi and video games. She's a bit of a geek, to be perfectly honest.

Player is based in the UK, and online times can be unpredictable due to work and family commitments. Always up for text-based RP to supplement in-game activity.