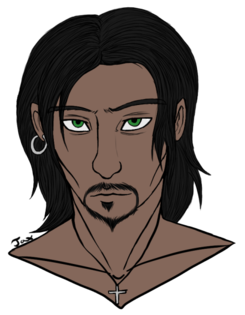 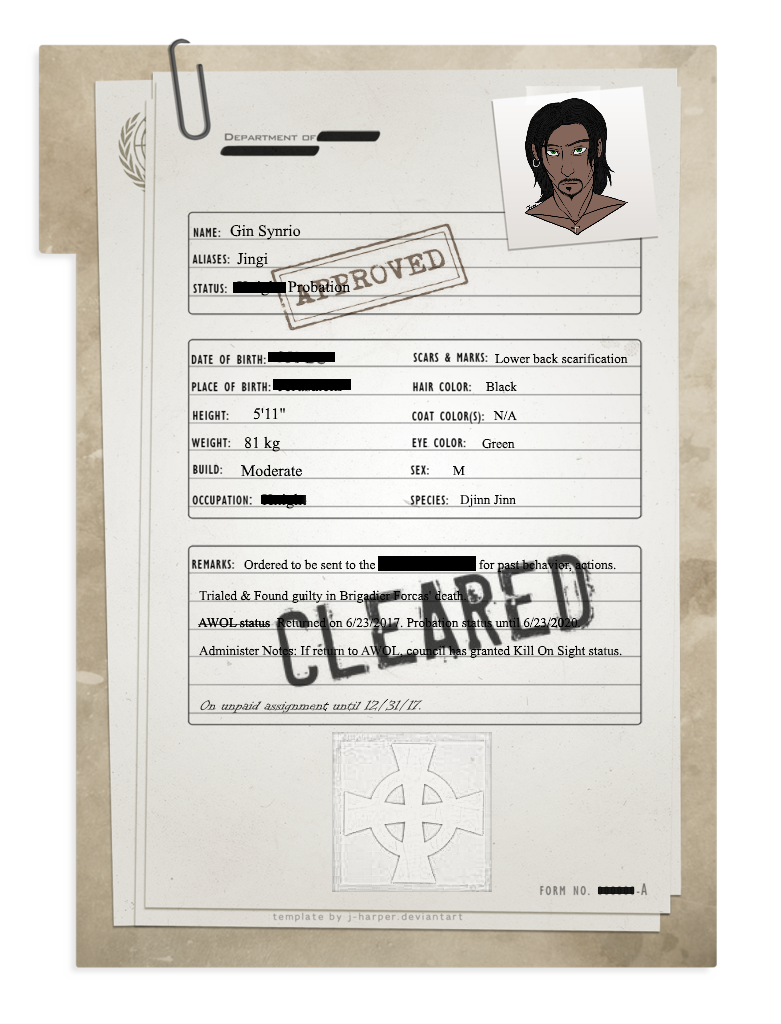 "The account and action of the ex-knight Gin Synrio will be taken into review. Upon the death of Brigadier Forcas, new information has been brought to the counsel's attention."

"The errant knight Gin Synrio was forcefully coerced into serving the Templars back at the start of the 1970s due to a miscalculation of error in business between two knights: Dero Pohl and Sir Forcas. At the time, Pohl had sold out his strained friendship to the Gin Synrio under the pretense that Sir Forcas would enact justice for the murder of his wife, Sonia. Pohl gave crucial information at the time to Forcas that Synrio was still under a binding spell - in which Forcas could use the djinn to bring back his wife. Little did the Knight Pohl or Synrio knew that Forcas had other plans than meeting out justice for a slain colleague's wife."[1]

"On that day, the Djinn Synrio would be bound once more to a master to serve - as King Solomon intended for all of his bound servants."[1]

"It would be of note that this counsel did not have prior knowledge of Knight Gin Synrio being of a demonic entity. However, that said, Brigadier General Forcas kept all files on his employees confidential. We believe that only the highest of [Redacted] would have been privileged to such knowledge. Continuing on... Decades past without incident provided to the counsel. It was only until the Djinn Synrio revealed his true nature to several counsels publicly. His intent, specified, that it was for a reason."[2]

"That reason being, he wished to draw attention to what Brigadier General had been doing. Yet he was unable to physically speak about the aforementioned subject due to "binding"." [2]

"The aforementioned subject, to which the ex-knight Gin Synrio was able to speak about upon the death of Brigadier General Forcas, was that Sir Forcas was about to enact a decades' long plan to create a demonic invasion underneath Temple Hall. His plea to the counsel that Forcas was to be slain to stop said invasion." [1]

"When trialed upon the case of Brigadier General Forcas' death, the ex-knight Gin Synrio was found guilty. Rank stripped. Imprisoned for [Redacted] and then sent to [Redacted]." [3]

[Early Life]
- 950 BC Invoked through Mattarias' flames by a Clan of Djinns underneath the enslavement of King Solomon.
- 931 BC Upon King Solomon's death various enslaved creatures, including Gin, would trade hands throughout Jerusalem.
- 525 BC In The First Achaemenid Period was when we see the enslaved Djinn trade hands all the way from Jerusalem to Ancient Egypt.
- 330 BC Traded hands to Alexandria, Egypt.
- 26 AD Traded hands back to Jerusalem.

The Reign of Terror

[Precursors]
- 78 AD Visited Pompeii. First meeting of the Xin'talia and the Baker.
- 79 AD Left Pompeii due to eruption. Lost sight of Xin'talia.


[Fiery Temper]
- 113 AD thru 1301 AD Several events & manifestations of fire and destruction throughout most of Eurasia.
- 1349 AD Incident with the Black Death & Barcelona, noted in the Edicts, Her Black Death


[Cooldown]
- 1689 AD thru 1696 AD Brief foray and marriage with Lucinde Bourbon, duchess to the House Bourbon of France. Produced half-breed child, Elisabet Bourbon. Separated in 1696.
- 1877 AD Upon the coronation with Queen Victoria as the Empress of India, Gin would submit to being an in-house and "exotic" looking painter and gardener for the Queen.
- 1900 AD thru 1969 AD Brief time spent in America.

Chaos rules the time spheres. The terror that was, is no more. Wrath subsided when he entwined his heart within another.

Enemies risen and defeated, time and time again. Yet a new one surfaces, creating havoc when there was limited peace: A technomancer. With their finances in disorder, valuables under lock and key - what will they do to continue on with their lives? Will the demons succumb to their moral-less instincts and steal for what they need? Or will they return to suffering the braces of the factions?

Find out in Secret World Legends.

Sssssss - Turn back time - Let me in.

What makes a man a man? A woman a woman? A meatbag a meatbag? Free will, chuck.