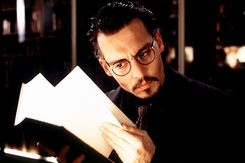 Born into a wealthy New England family, Dorian Sinclair had little interest in the family's antiques business and instead pursued his own academic interests. He showed little regard for his family at all, rising as something of a rock star among the educated circles he frequented. His insights into and discovery of countless artifacts have earned him a large amount of professional respect and it was believed he would pursue a career in education eventually.

This all changed following the death of his father, Henry, and his inheritance of the family estate. Dorian's business acumen was stoked overnight and through a series of illegal trade contracts and his prodigious historical knowledge, he turned a small antiques store into a multinational corporation with millions of dollars in assets and digs operating across the world.

Dorian's meteoric rise in the business world, combined with his accomplishments in the academic garnered the attention of a number of secret societies. Notably, the Illuminati and Phoenicians were among Sinclair's most influential clients and it was only a matter of time before he was so deeply involved that recruitment was a matter of course. The Blues beat the pirates by mere hours, securing Sinclair's allegiance.

A year later, he was recruited as a contractor for Cerberus Solutions. Following the restructuring of the company into it's current form, he was promoted to the executive board (Director of Archives) where he remained until his mysterious disappearance at sea in early 2016.

Phoenicians - Dorian established himself as a ruthless trader and black marketeer amongst the pirates of New Carthage. While he is not liked by the Phoenicians, he is grudgingly respected as the mysterious "Rivenblood", an alias he uses when involved in illegal activity.

Deep Ones - Dorian has a deep and abiding hatred for the fish-people and they likewise fear and despise him, going to such lengths as to kidnap and detain him for periods of time (during which he has never been harmed).

Dorian is a skilled sorcerer, but it is his capacity for research and discovery that is the most notable. He has demonstrated repeatedly an ability to root out the most obscure bits of lore and weave them into useful intelligence for action teams countless times.