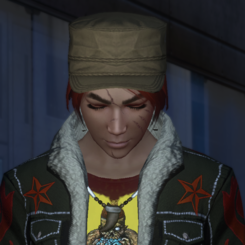 Build: Muscular with a bit of extra fat

Due to her lifestyle, Valentina is a very practical woman. Since she was a child she learned how to take care of herself, resulting in competence in a wide array of skills; a jack of all trades - master at none. She will always admit she is no professional in any of them - she has not studied or particularly trained for extended periods of time, much is self taught (as situations would demand, since she didn't quite have anyone to rely upon).

She is fluent in Slovenian, Italian and English, understands Serbo-Croatian, speaks some Japanese, albeit poorly and understands some sign language.

During her childhood and teens she has learned basics of taking care of herself - taking care of the apartment, cooking (which has become something she enjoys and takes pride in), figuring out problems and how to fix up certain appliances and devices. She has dealt with stressful situations, living with minimal amounts of sleep, learned how to handle herself in fights. She later also took karate lessons for some two years.

Her time spent in the military has further strengthened her body and despite spending less time in the career as she would have wanted, she has learned a lot. Hand-to-hand combat, firearms, explosives, first aid. She still swears that her favorite rifle, the AK-47 is the best rifle, as she values reliability over anything else. She will make use of modern technological advantages, but she refuses to fully rely on anything that can easily malfunction, break or run out of power. She is used to tough things out, shunning treatment and medicine unless really necessary; in most cases she relies on the body healing on its own. Her immune system strengthened and she rarely gets sick (and when she does, she quickly overcomes illness), she shrugs off pain to high degrees and heals very well.

Bar and street fighting were also valuable lessons in her life. She holds her alcohol well and can function and fight while drunk. She has learned to use every advantage she can; her skills of karate and hand to hand combat, intimidation, misdirection, taunting and mocking her opposition. She doesn't fight fair. "Life's not fair. Life's dirty." She will resort to dirty tricks and low blows without a second thought. She will at times resort to sexuality for benefit, though more often for pleasure. Experienced in many kinks and sexual acts, both with men and women.

Her travels and work were source of even more knowledge: orientation in nature, survival outside of civilization. She's not a picky eater and there are very few foods she won't eat. During the years she has worked with a lot of people, simple people who were passionate about what they do, learning from them and listening to their stories was both entertaining and educational. Her skills range through woodcutting, carpentry, masonry, construction, farming, fishing, sewing, painting, mechanics, driving and operating various machines.

Highly adaptable to new environments and situations, she can use a wide variety of weapons to a limited (but still very dangerous) level of skill. She is a very handy individual to have around and she believes that should the apocalypse happen and the world go to hell tomorrow, she would be ready to survive in it. The main downside to this is that she is quite inept at living in a modern society. She could never be a 'model citizen', which is why the Secret World is a perfect ambient for her.

While mostly under control, she is mentally and emotionally highly unstable and fragile.

Valentina is a cynic and sarcastic individual. She is regularly nihilistic and fatalistic on the surface, but in spite of all that, she refuses to give in. In truth, she is an undying optimist and never gives up hope.

Sociable and friendly, but somewhat socially awkward due to her straightforwardness and sometimes brutal honesty. She cares deeply for her friends and is in general a nice and caring individual, always willing to help.

Her mannerisms are very unladylike and crude. The same goes for her language. She can be arrogant and self-centered, often considering herself superior to others.

She's laid back and easygoing, dislikes being in a rush. Likes to just stop and relax, enjoy the moment. She takes joy in life's simple, little things.

She's no perfectionist. She will work hard and she will do her tasks properly, but her methods are crude.

She values functionality and reliability and dislikes fragile gear and weaponry. Clothes should first and foremost be comfortable, practical and sturdy - so she generally favors military wear.

- Repeated instances of severe psychological trauma and high stress, cause for mental and emotional instability; chance to become dangerous

- Time spent in asylum for a number of psychological disorders: suicidal thoughts and tendencies, repeated attempts at self harming, auditory hallucinations, delusions and paranoia, manic episodes of extreme violence

- Heightened senses and instincts due to the amount of time she's spent and lived outdoors and travelling.

- Favors combining her anima manipulating abilities with her proficiency with modern weaponry.