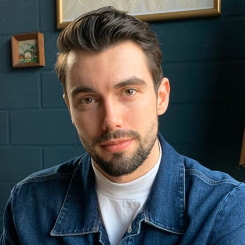 Theodore Étienne Cardon was born in Ottawa, Ontario on September 30th, 1989. He has a younger sister named Trinette, a florist. His late mother, Sharon, was a software engineer, and his father, Louis, is a dentist. As Theo was growing up, his mother kept food on the table, and overall the family was more than financially stable. Though his parents loved and cared for him, he had a bit of a rebellious streak, which often got him into trouble at home and at school. After he and his sister graduated from high school, the family moved to Vancouver, British Columbia.

Not knowing what to do with his life, Theo spent a few years taking various college courses, working part-time in his uncle's auto repair shop. He indulged his rebellious streak by participating in illegal street racing, proving himself to be an incredibly skilled driver, and evading numerous police pursuits. He was caught once in 2009, but he paid bail using his parents' money.

Theo's life took a turn when his mother was diagnosed with vascular dementia, which helped him realize how much of a disappointment he was to his parents. Determined to change, he attended the Pacific Institute of Culinary Arts -- where, at age 22, he graduated with a 2-year Diploma in Culinary/Baking & Pastry Arts. He started working in various casual restaurants, and at age 26, he began working at an upscale restaurant. Soon afterward, his mother had a stroke and passed away.

Though he still participated in the occasional street race, Theo continued working at the restaurant, having dreams of becoming a famous chef, and making his father proud of him. In early 2019, he was chosen by Gaia.

Theodore was recruited into the Templars after being chosen by Gaia. His anima has shown to be unusual -- his bee provides him with Filth protection but it lets mortal human illnesses slide, and therefore Theodore will suffer from diseases like the common cold.

Theo has plenty of offensive magical power, and has shown a natural aptitude for chaos and elemental magic. He has some level of proficiency wielding a battle axe in combat, and can also use telekinesis and metalbending to some extent.

Theodore has brown eyes and a fair skin tone. His hair is dark brown. He stands at 185 centimetres tall and weighs at approximately 75 kilograms. He has various tattoo patterns on his arms and torso.

His personality is rather laid-back, but what is most notable is his caustic, biting sense of humor. He rarely shows this side of himself to people he doesn't know, but among his friends, Theo is quite the tease -- sometimes getting rather insensitive with his jokes.

Two notable affiliations of Theodore's are Peter Harkem and Caomhan MacBradaigh. The three used to be roommates. In particular, Theo used to work with Caomhan in an upscale restaurant.