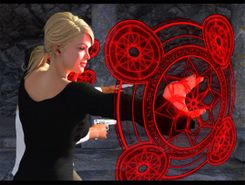 Despite the fact that Suri's mother, Stephanie, was raised by two loving, doting parents (Robert and Margaret Grant, both deceased), Stephanie ended up choosing a rougher life for herself. She has an arrest record which includes prostitution and drug possession. She was never married to Suri's father. Suri had three older half brothers and a younger half-sister.

Suri was taken by children's services at the age of four to live with her grandmother, Margaret, a widow who taught the girl all about music and instilled in her the love of vinyl records. Her life with her grandmother was idyllic, but when Suri was seven, her mother petitioned the court to have her daughter back.

As Stephanie had cleaned up, thanks to the help of Mitch Hughes, who married her despite her being pregnant when he met her, she was given a second chance with her daughter.

She picked 7-year-old Suri up from her grandmother and remained a clean, halfway decent human until giving birth to Kristen. Mitch Hughes adopted both girls, but the marriage would only last three years and Stephanie's behavior drove him away. He left and the family never saw him again.

From then on, Suri's life was just this side of miserable. At school, she was teased by other children. In her building, she kept her head down and hurried to her flat. She had the charge of little Kristen from day one and spent most of her school days worrying about the child until Kristen could go to school herself and ease some of Suri's worry.

Her family wasn't worse than most families in the building, but better than only a few. Her mother soon took up with a local petty criminal, Mason Kain. Mason wasn't the worst her mother ever brought home, but it was the entire package of Mason and his mangey friends.

Suri made sure Kristen was safe, to the detriment of her own school work, social life, and sometimes physical wellbeing. She defended herself and Kristen from their step father's friends and there is a butcher knife impaled on the wall of her childhood bedroom to this day to commemorate it. Her school days so often ended in detention that she eventually stopped going to take care of her sister more thoroughly. She gave up dreams of going on to further her education. She helped her sister with school work and took care of her through Kristen's unusual number of fevers and ailments. Then one day, Kristen was gone. She never came home from school and the police seemed to exhaust their efforts at looking quite quickly.

While still searching desperately, Suri was chosen by Gaia at the age of 19 and packed up and left her home with only a messenger bag and the clothes on her back. Inside the bag was a teddy bear that belonged to Kristen.

While still searching desperately, Suri was chosen by Gaia at the age of 19 and packed up and left her home with only a messenger bag and the clothes on her back. Inside the bag was a teddy bear that belonged to Kristen.

After overhearing a strange conversation in the tube station and three nights being homeless with no food or shelter, she found herself in the Horned God. . In the pub, she found, or more accurately, was found by, Dr. Damian Jacobs. To make a long and very sweet story short, the two of them completed each other and went on many wonderful adventures together.

Suri was accepted by the Dragon and also currently works a bit more than part-time at the Roman Wail record shop in London and hosts the Wednesday night Mixtape Listening Party, a community project to spread the love of music throughout the Secret World.

Stephanie Kain - mother - Whitechapel
Mason Kain - stepfather - Whitechapel
Adam, Robert, and James Grant - older half brothers, scattered and married, some with children
Kristen Hughes - younger sister, kidnapped 9/24/2019
Dr. Damian Jacobs - Romantic Partner: Suri and Damian feel a certain pull in their blood, as if it speak to each other, or, more whimsically, as if their bees knew each other, Suri has mused a time or two. The source of this pull is unknown, and may just be a manifestation of the similar magics of two people who share an intense love.

Sunfu Pungja - AKA Fushi,another Dragon who has an affinity for the moon and carries a magic flash with a drink that tastes like whatever the drinker loves most.

Suri never had time for hobbies. She and her sister were fortunate enough to have a window that overlooked a courtyard and faced a brick building where one of the tenants projected nightly films onto the exterior wall for himself and his pals. It was the time of day that was a favorite for both girls. Thankfully, the considerate neighbors showed subtitles on the films, even the ones in English, to cut down on the noise level. The girls had read more films in their short lifetimes than many watch in all their years. Film, just as music, became her hobby.

Since the bee, she and Damian have tried several things together, including surfing in Australia. She loves to run and recently obtained a diploma similar to a GED in America. Suri can typically be found on a Friday night in Brooklyn Bridge Park attending DJ Malak's shows, and with Damian at the Horned God on Monday Nights, and the Roman Wail on Wednesday nights.

Damian put Suri's pistols together for her and trained her on them. She proved to be an excellent shot and took to the pistols immediately. Being a lover of music, she affectionately called them Poncho and Lefty.

Suri's talents also lie in blood magic. Damian trained her in this as well and provided her with a blood tome. Now that she is more proficient, she is going to look for one that speaks to her.

If anyone wants to engage with Suri, she can be found in game as Jhayde. Feel free to add her as a friend. On twitter, @hughessuri

Suri works at the Roman Wail record shop. She also runs the Mixtape Listening Party each Wednesday night at 7pm EST. Mixtapes are provided by members of the community. To submit a mixtape, send Suri a list of 22-25 songs that your character likes or that tell the story of your character. You can do this by sending a twitter DM or finding her in the QSR forums. Www.quantumstateradio.com is the radio station website that sponsors the listening parties. You can post your list to her there or talk to her about making one. She will play the tapes at the record shop and all community members are invited to hang out and chat and hear new music. The parties only last about an hour and a half and are uninterrupted tapes with no talk in between.

Suri can be approached about the mistakes, to discuss music, or to discuss stock that is currently in at the Roman Wail.

She also has a sister who is missing. Information can be found on this on the twitter account @bkhswlrp to approach her regarding this.

Suri is at the Monday night get-togethers at the Horned God at 7pm EST.

Kristen Hughes Age 12 Missing since 9/24/2019 She was last seen at 2:45 leaving Whitechapel Primary on Church St. Kristen was wearing a red and black uniform skirt from Whitechapel Primary and a white uniform blouse. She carried a pink backpack. Known to be inside the backpack were 2 spiral notebooks, some textbooks, and a small pokemon canvas lunch bag. She has brown hair and brown eyes. 1.57m and 52 Kilos. Police have interviewed 75 known sex offenders in the Whitechapel area, but resources are extremely limited and most sex offenders are not required to register in Britain. There was a traffic camera across the street from the school that police claim to have viewed but I have not been able to see it. I am told there is no information, Kristen was seen walking toward home and walked out of the camera view. I have not found anyone who saw her beyond that camera view on the fifteen-minute walk home. Mother: Stephanie Hughes – prior arrest records: drugs, prostitution; no place of employment; from Whitechapel Father: unknown Step-Father: Mason Kain – known activities: gambling, drugs, smuggling, small-time criminal – no information prior to 2007 when he married Stephanie Hughes.

I have several detectives of unique abilities working on the case. We have traced her path from leaving school to an area of town she would not normally go in, accompanied by an unknown person. Her trail stupid and we think she was picked up in a van.

The investigation is ongoing and i will add more details as time goes on.