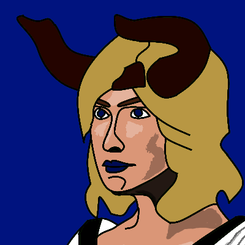 Stung in a now-strange apartment belonging to a now-strange man, Skye's transition into godhood was otherwise ordinary, as far as stings go. Two weeks of trashing the apartment with holy fire, the noise police showing up to bully her into crawling through some sewer to get knocked out and have her lawset changed... Y'know, the usual. If Skye knows one thing, it's that when the Captain In Blue gives you a secret mission and the tools to accomplish it, you go out and do whatever it takes.

Skye was thrown into a world besieged not only by the "ordinary" zombies and bugs, but also by giant flesh golems, ghosts made of anger and feet, hulking beasts of sand, and hundreds of people just like her gunning them down for festive clothes, all orchestrated by the enigmatic Rider of the Apocalypse himself. After her crash-course in magical killing over the course of dozens of flesh golem gunnings, the Illuminati still had use for her, sending her to investigate larpers with swords, larpers with sand, larpers with Twilight in their eyes.

When her life settled down enough for her to properly socialize with her kind, she was quickly seduced and stolen into The Toolbox, where she served as field agent and then Chief Requisitions Officer. If you lost a blender anywhere from November 2016 to March 2017, chances are it's sitting in a Toolbox warehouse right now. Other than petty theft, Skye essentially just reported to Geary just as she did before the Toolbox, but with friends to laugh with in downtime.

Creative differences led to Skye joining the Stardust Initiative, where she serves as Chief Requisitions Officer and Hydroponics.

If your character has senses beyond the mundane five, you'll likely find some info here you should be able to find out.

[A glimpse into her life]