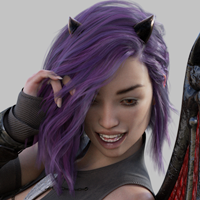 Simi grew up amongst her father's tribe, she spent most of her time learning tribal lore, hunting, and survival skills, which have proven useful in the chaotic world we now live in. Of her mother, not much is known, having disappeared shortly after her birth, though her grandmother tells her she shares her more... unusual traits.

The only legacy she has of her mother is the Beast, pitch black, sleek lines, once her mother's, now hers, to those who can sense such things, layers of spells and wards reside in the Beasts metal frame, Simi has returned to her on occasion to find piles of charred ash by the doors, "problems" are dealt with lethal force.

"There are many things that hide in the long northern night, I was hunting them long before Gaia called me..."

Around her feet twines a Nermegal, Zarek watches everyone as well, a companion to her in a world gone mad.

Simi is slow to trust, even slower to love, (blame a now EX-husband who couldn't keep it in his pants if his life depended on it) But that is starting to change, she smiles more often, there is a softness around her eyes that wasn't there before now that a certain Highlander has become a part of her life.

In her downtime, Simi can most often be seen with Conall Moncrieffe,  whom she is now soulbonded with.

Gold eyes watch you from behind wispy purple hair, a tattoo of a dragon scrolls down the left side of her face.  Two well maintained guns rest upon her hips, always within reach. On occasion a shadowy sword can be glimpsed as well.

Black horns peek out from her hair, dark wings rise up behind her.  At first glance, they appear to perhaps be an elaborate costume, but after observation, one sees they move, they even can be seen as a gauge of her mood.