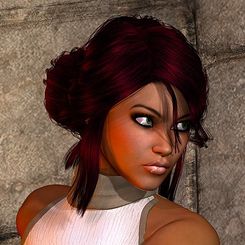 Born from a French father and Egyptian mother, Shan spent much of her childhood alone or under the guardianship of her maternal uncle and aunt, because of her parents careers as doctors and their work as humanitarian aid workers. This was perhaps where her love of different cultures first came from. Shanni visited her parents in various countries where they worked when they deemed it safe enough for her to do so. She went on to do a B.A. in anthropology with a minor in English Literature.

She was currently working on a Masters in archelogy when she was "touched by the bees" which saved her life from a terrorist attack, unfortunately her fiancé Daniel Shehab died. Unable to comprehend how she had survived, what she felt or saw, she sought answers, just as others sought her. Though approached by the different factions, her more inquisitive and at times rebellious nature was better suited with joining the Dragon. She strives to make sense of the new order and chaotic world around her. She practices the ancient martial art of Tathib, a blend of traditional Egyptian dance with training of the long fighting stick. She has incorporated this martial art with the use of her main weapon style, the sabre, alongside her newly emerging elemental powers. She worked as a waitress in local cafés to help pay the bills before becoming a Bee. Her last permanent address was in the city of Montreal.

Her permanent home was in Costa Rica with her husband Jude Shinohara. After Jude had gone M.I.A and his return was uncertain. Shanni began to mourn her husband for dead and boarded up and locked up their home in Costa Rica. It will be there for Jude should he ever return one day. Shanni is now trying to get her life back to some kind of state where she can function as she mourns her recent loss.

After being in mourning for a little over four month, Shanni started to see the light at the end of the tunnel, thanks in part to her good friends and co-workers at KBC. She decided to return to her Masters study in Landscape Archeology. She was in a steady relationship with her boyfriend and former co-worker Sal Duke for six months.

Sal Duke went M.I.A. during the Mother Shipton's Cave mission and has not been seen or heard from since then. Shanni grieves him for dead and tries to piece her life together once more.

Shanni has finally submitted her master's thesis and earned her Master's degree in Landscape Archeology. She now lives in Quebec City, and keeps her home in Costa Rica as a personal sanctuary in honour of her late husband Jude.

Shanni and John Kole have become partners on and off the field. The two seem to be a good match, complimenting each other quite well.

After the departure of two close friends Maya Stroi and Matt Drake from KBC, Shanni and John left as well and went on to form the Delphic League with John's sister Vanessa Kole and their close friend Loryne Atwin as well as her new partner in the Templars, Dane Magnussen.

Shanni and John Kole have parted ways recently and Shanni has taken time off missions to focus on completing her Doctorate degree in Landscape Archeology.

John Salvador "Sal" Duke - boyfriend and partner from August 2018 to February 2019 (MIA since February 2019, believed to be deceased)

Relationship status: Widowed (her husband has been M.I.A since May 2018) and single

Co-founder of the Delphic League

WEAPONS: Primary: Blade- Shanni`s primary weapon is the sword, though she favours her katana or rapier for speed and maneuverability, especial in tight spaces.

Speciality Elemental Magic Primary: Fire: Shanni is an exceptionally powerful pyromancer, though she often resorts to it as a last option knowing how dangerous this element is for others and the physical destruction it can cause.

Secondary: Her secondary talent is ice, it is the one she resorts to most often and tries to make creative use of such as ice walls and icy surfaces to destabilize enemies.

Tertiary: Wind, lightening and earth; these are less often used and weaker.

SkILLS & TALENTS: Shanni is bilingual with both the French and English language. She is somewhat fluent in Arabic, especially when it comes to curses and the use of Catholic prayers and hymns in Arabic since it was the language of the Greek Catholic church she attended as a child.

She practices the art of oriental dancing since the age of 12 after her ballet teacher told her her body type would most likely never let her have a career in ballet. She also took up modern Tahtib after her mother introduced her to her own teacher, a Catholic Egyptian in exile in Paris who had opened up a school for modern Tahtib. Shanni uses this for her training with the sword, but can also adapt the style to fight with the quarter staff and spear if needed.

Shanni was taught to surf by her husband Jude Shinohara, a professional pro-world surfer, during their time together. She has recently taken up Neuvo Tango classes as a new dance style on top of her classical ballet training and Baladi dance style.

Anima enhanced abilities: Enhanced speed, agility and healing rate. Heightened auditory sensitivity to paranormal entities that linger due to strong emotional connections; anguish, rage, sorrow, etc. This ability seemed to have developed due to Shanni`s first death seconds after being Beed in the terrorist attack that took the life of her journalist boyfriend Daniel Shehab and everyone who traveled on the bus towards Damascus that ill-fated day.

WEAKNESSES: Shanni tends to have a short fuse when it comes to others who are trying to hurt or exploit people she comes to love. A tall-tell sign her temper is rising is her switching to the use of French or Arabic while cursing.

Practicing a modern version of the ancient Egyptian fighting martial-art of tahtib, she embodies grace and agility on the battle field and on the dance floor. Her long dark curly auburn locks are tied into a loose bun for practical purposes. Though generally friendly, she has an air of reserve, but once she let`s people in, they discover a warm, quirky and fiery personality behind almond-shaped sea-green eyes. With the number of people who have gone missing or died in the past three years, has made it difficult for Shanni to let new people get close to her for fear of losing them. She appears to have a cold demeanor to strangers and mere acquaintance. She hides a caring, deeply loyal, devoted and passionate nature.