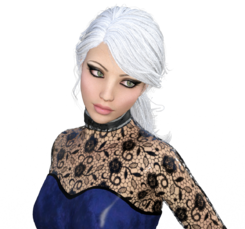 Seishin is the only child of Tsukasa Sena (Japanese from his mother and American from his father) and Valentina Andrist (Swiss father and Swiss mother).

Her parents met while working as scientists for the Illuminati. They are both geneticists. Her mother has always been the most dominant of her parents, the disciplinarian, the forceful personality, and the higher in rank of the two. This could have possibly been part of the reason she often came across as disdainful toward her husband. He did not progress above her, something she would not have allowed, but the attempt by him to do so would have been nice.

The neighbors were always Illuminati employees, likewise Sei's schoolmates were the children of Illuminati employees. It was a given that after high school, she would attend university and become a geneticists or some other type of scientist beneficial to the company. In fact, she was top in her class that was the best of the best in future Illuminati employees. She did all the right things, studied hard, had a few close friends in her own socioeconomic background, and kept her things minimal and tidy.

Her senior year, she had plans to go on a two month summer vacation with her girlfriends and then off to college. However, two nights before the trip, the bee stung.

When Sei did not show up for take off, her friends called for her. Her mother told them she had gotten an amazing opportunity to go on to college and for them to leave without her.

For the first couple of weeks the friends were on their trip, they sent pictures and messages about how they missed her. Then the messages stopped they went on with their lives and forgot her.

In reality, as the girls returned from their vacation and went on to college, Sei was placed by her mother into a special training program for new Bees joining the Illuminati. Her summer was spent testing for Talents, training in chaos magick and controlling the elements. She wanted martial arts. She wanted blades. But everything must be as Mother wishes.

. She met a young Japanese man, 20 years old to her 18, and they became sparring partners. Asano Yoichi. He walked her to her dorm, sat with her at meals, texted her all hours of the night. He was a perfect Japanese gentleman.

They were released into Kingsmouth to begin work and within the first few days, shortly after Asano and Sei shared their first kiss, the two were overwhelmed by a hoard of zombies. Sei turned to check on Asano, just in time to see him, first weapons hanging loose at his side, not fighting back, falling, and disappearing in a golden glow.

She barely made it through the hoard, confused and frightened for Asano's safety. She fought her way to the nearest anima well and waited for him. She went to the next nearest one and waited there. She called good phone for six hours until it started going straight to voicemail.

Bees were basically immortal! She had no idea why they didn't return him to a nearby well. As days went on, she continue on alone, confused, waiting and searching until she had completed her mission in Kingsmouth and for some unknown reason waited another three weeks before being sent to another part of New England. Overall, her mother kept her in Maine for six months, vastly longer than anyone she had ever heard of.

Sei's mother furnished a very nice apartment for her in New York as a consolation prize for losing her dreams of college. It was no comfort, carrying with it strange dreams of her childhood in all of its empty spaces.

It was also where Ezra, a random Illuminati agent with whom she'd been pared on an investigation of a missing ship, had come in, figured out how to bypass her security system, and nearly tried to force himself on her as payback for her kindness in offering him a place to stay.

She fought him off and sent him away after discovering the true nature of what he was, and thought that would be the last time she saw him.

With the help and advice of her new best friend, Vanessa Kole, Seishin pushed on, leaving America without permission and taking a small job in Egypt, which led to another job, sanctioned by her handler, in Marrakesh, for which she brought Vanessa on to help.

Vanessa introduced her to the pop star, Alicia Laike, who trained her on blades as she had wanted from the start.

Vanessa is currently assisting Sei in trying to ward her apartment against various creatures that may have targeted her. Vanessa's brother, John Kole, is helping with setting up her tech stuff so the Illuminati, and her mother in particular, can't spy on her.

5'3" White/silver just like her mother and maternal grandparents Light green Face claim - Hannah Waits At this time, Sei has a large tattoo on her right thigh of a deer head, the Venator family crest She wears a bracelet at all times and a black choker around her neck

Sei was trained by the Illuminati in elemental and chaos magick. Alicia Laike trained her in the use of blades.

Ezra Valinos - His mother was a succubus and his father wanted nothing to do with him. He is an Illuminati agent.