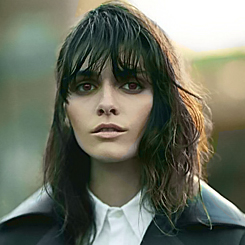 
Deceptively small, Sasha carries herself with like royalty. Every step appears to have been practice so that her stride is absolutely perfect and gives the appearance of gliding over the floor, every movement of her limbs graceful and poignant, and every expression on her face teasingly stoic so that even the slightest hint of emotion carries with it a powerful message. Her voice, marked with a mix of a Spanish and Italian accent, gives the impression that she's foreign despite having lived most of her life in the United States of America. Even when her appearance is unkempt, it seems purposeful as if it is just another fashion trend that she's adopting.

Despite all of this, her eyes tend to be her most peculiar aspect. Appearing a dark brown under most light, they have the tendency to glimmer their true color: a deep red that makes her eyes appear as if they are made of dark rubies.

Sasha de La Cruz is fascinated with the good things in life. Fast cars, designer clothes, exquisite cuisine; her tastes are refined to an almost abhorrent degree. Everyone to her is either a servant or an enemy; below her to be stepped on or above her to be pulled down. Ferocious in all aspects of her life, she's a predator trapped within the lithe frame of a slightly shorter-than-average body.

Hardly anyone would suspect it, though. At most, she comes off as slightly arrogant, but she expresses herself in an otherwise friendly fashion. Too often, she's willing to be the shoulder to cry on and the ear to listen. It's a terrible mistake to consider her harmless, but it's one that's made all-too-often.

For better or worse, the passion that Succubi are known for has managed to manifest itself in her as well, despite the dilution of the infernal bloodline in her heritage. Though she keeps control of her emotions on the surface, envy, jealousy, possessiveness, anger, vindictiveness, and desire flair up inside of her rather easily and she tends to harbor them for long periods of time. "Forgive" and "Forget" are not words that she knows the meaning of. If she's crossed, even in the slightest way, it is probable that she will seethe over it for an unreasonable amount of time and concoct plots to get her revenge; even at the detriment of those close to her.

Her favorite pastime can be summed with one word: Corruption. She enjoys bending people to find their breaking point, testing the strength of of their morals, and watching the transformation that ensues when she's managed to plant a seed of debauchery inside of her 'victims'. In short, manipulation is her game and she tends to be incredibly good at it.

As the only child of Alejandro and Marina de la Cruz, both of whom are heavily involved with politics (Alejandro being a U.S. Senator and Marina being a Pharmaceutical Lobbyist), Sasha has always had an initiate experience with politics and the secret world of the occult. From a very young age, she was taught the importance of subterfuge and the hierarchy within which society operated. Her parents had high expectations of her, so it was no surprise that they enrolled her into Innsmouth Academy when she became the appropriate age. They considered it more than a simple education of the occult, though: it was meant to be a testing ground for everything Sasha had been taught before.

She became a menace of the worst sort at Innsmouth: someone who wrestled control away, even from faculty, to get what she wanted and without seeming like the villain until it was far too late to do anything about it. It was there that she perfected her craft. Blackmail became such a common occurrence that there was rarely a single person whose secrets Sasha did not know and she readily traded them to climb the 'political' ladder set before her at the school. More than once, people died gruesomely while she attended. Sure, there were rumors that Sasha was responsible for it, but she always had an alibi and, more importantly, people to take the fall and so many deadman switches that even attempting to act against it caused the offender to fall into ruin, disgrace, or worse.

Ultimately, by the time that she graduated, she was hated. She was fine with that, though, for fear and respect were much more useful than adoration and love. Besides, she had proved herself not only to her parents, but the Watchful Eye that kept tabs on her.

When she graduated, she was immediately contacted by the Illuminati who offered her a position within their ranks as a 'Cleaner': an operative who comes in after or before incidents occur and ensures that there is no evidence that could point back to the Illuminati. Focusing on destruction and planting of evidence, bribery of key officials, blackmail of problematic persons, and proposing assassinations of individuals that cannot be dealt with otherwise, the Cleaners are a important part of keeping the Illuminati hidden away from the public at large... and causing chaos in the other secret societies. She accepted their offer and was shuffled to the shell company Spectrum Insurance, Inc. where her cover as an Insurance Claims Investigator allows her to travel around the globe and meet with people without suspicion.

It works well for her. Not only is she paid extravagantly well for her services, (being able to even buy a high-end loft in the middle of New York City), but her work has given her access to every dirty secret that she can possibly imagine; something that she readily uses to climb the corporate ladder of the Illuminati.

While her father's lineage is rather normal on all accounts, her mother's is of peculiar interest: they hail from a line tainted with succubus blood. However, as far as Sasha knows, there is only one member of their family between herself and her ancestor that was/is a full succubus and as such, the blood has been diluted more with each generation. As such, Sasha has next to no qualities from it that benefit her. Mostly, it manifests itself via her red eyes. It can also be argued that her personality has roots in her infernal heritage, but it is equally possible that her villainous psyche is a product of how she was raised.

However, things get interesting when she's in close proximity to Hell Arcane Energy. The effects that it has on her body are rather astonishing: her ears become pointed, her teeth sharpened and her eyes burst into orange flames. She's not particularly fond of these changes for it makes her stand out more than she would like. Socially, outside of the Hell Dimensions, her diluted bloodline means very little. There are those that can seen the vague Hell aura imbued inside of her, but its so slight that it is usually easily missed or mistaken as a flaw in the seer's perception.

Inside of the Hell Dimensions, she's treated quite differently. Some Houses within Hell view her as a mutt, a half-breed to be killed or simply not worthy of their attention. However, they are others that accept her as one of their own. It is those that she tends to stick around as she finds some comfort in being among the succubi/incubi that she can technically call 'family'. That being said, reunions are far and few between.

⚠ WARNING ⚠
All information in this file requires a Q-Level Security Clearance. Any access to this file, authorized and unauthorized, has been catalogued and reported. Report to your nearest security official for further instructions.