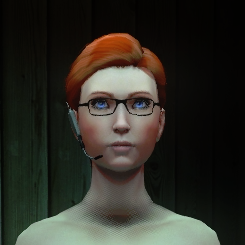 Sarali is a pale skinned, short, redheaded girl. Hair almost always in an easy ponytail, and with minimal makeup. She has bright blue eyes, but otherwise doesn't stand out too much and is not overly remarkable, really. Her main other potential notable feature is her penchant for some eye catching outfits. There is a drone following her constantly, keeping a camera pointed at her and her surroundings.

When nude, her silver ring piercings through each pink nipple stand out prominently from her perky, cuppable breasts, and her pubes have been shaved into a strip, guiding the eye down to her ready peach. Her landing strip making it clear that the carpet matches the drapes, as they say. She is incredibly easily turned on, and that is frequently displayed via her nigh perpetually alert nipples and quickly slickened slit.

Innsmouth Hoodie: Hoodie is about 2 inches shorter than it appears ingame and the lights on her headset pulse whenever noise is going on nearby. NSFW Details

In the pocket of the hoodie Sarali carries a pack of Band-Aids. Any glance under the bottom of the hoodie and the reason will likely be apparent. The only thing she is wearing underneath the Innsmouth top is a single Band-Aid covering her sex. Having been sloppily applied, some part of her pinkness is almost always still visible. Not that it particularly matters, since as she gets wetter the Band-Aid’s grip on her tender parts tends to weaken and slip off of her anyway. Whenever this happens and she notices it, she’s got another Band-Aid ready to wear. They're also handy for helping people with scrapes and bruises! ^_^

Egyptian Snake Charmer: Does not fit as snugly as it appears. NSFW Details

The top straps of the outfit fall away and to the side of her chest often, spending more time displaying her boobs than covering them. The snake dildo, or "cunt cobra", as a friend calls it, is held in place mostly by being lodged into her pussy. By pressing one eye of the snake it will vibrate at a constant slow pace. Pressing the other will switch to a fast, intense, pace. If both are pressed at the same time it will cycle between the two randomly. When in this outfit her thighs are nearly always glistening with her sex juices, as orgasms are frequent and often intense. The back of the outfit is short enough that when bent over one can easily see if she's wearing the black buttplug that often accompanies this outfit.

Sarali's shorts are much tinier than displayed, small enough that a tuft of her little red landing strip is visible poking above the top of them. With how small the shorts are, they are still easily removed. The very thin crotch of the shorts tends to show off the sides of her pussy lips, and appears to be partially wet. One may guess the reason for this to be related to a pink cord leading out of the crotch to a controller tucked into a leather garter strap wrapped around her left thigh. Her thin white top is cut to above the bottom of her breasts, leaving a significant amount of underboob on regular display. When she jumps or stretches, her pierced nipples come free of the clothing easily as it rides up her body. The material of the small top is thin enough that in regular daylight, looking closely, one can make out the colour of her nipples through it. And when wet it becomes almost entirely transparent, doing almost nothing to cover her. This is a common event in rainy Transylvania, where she most frequently dons this outfit.

The cups of the top are made with a lace that is quite sparse, making her breasts able to be seen easily through the material when in the light, and it is cut extremely low. Low enough that her pink areolae are visible above it, and when it slips even slightly her nipples end up above the material out in the open air. The knots holding up the top can be easily undone. Her shorts may seem rather modest at an unobservant first glance from the sides, but any closer inspection will reveal them to be largely crotchless, providing easy access to her fun bits. The hole for her crotch is just high enough in the front to show off her clit, wide enough that her labia can be seen through the opening, and barely high enough in the back to provide access to her rear entrance, should it be desired. When wearing this outfit Sarali tends to lay or sit even more openly than usual, letting the warmth or the waves caress her and bring her pleasure.

Tends to like to slip its tentacles up into or around warm areas at any given time.

Often plays with the strings and hoops of Sarali’s Snake Charmer outfit, pulling it off her body.

The magical dust causes anything that it touches to feel increasingly turned on, with more dust causing one to feel the effects more.

With no regard for time or place it will pull at Sarali’s clothes.

Sarali grew up in an orphanage, but ran away from it when she was young. With a love for reading, she educated herself via libraries and online. As for income, she mostly performed odd jobs, but did well enough through them to cover her simple needs. She mostly lived via whims, not getting too established in any particular city or place, and moving whenever she got bored or a place otherwise seemed unpleasant to stay in anymore. Via her laptop and phone she can make money camming, which she greatly enjoys, and she sometimes picked up jobs at dance clubs she frequented. It wasn't glamorous living, but she liked traveling, and when she'd gather up enough money to travel to a different part of the world she would often do so. NSFW Details

Sarali is, and was, quite fond of exhibitionism and casual sex, which she had no desire to stop practicing, and would often have sex all around the cities she lived in and these various clubs just for kicks. She wasn't dumb about it, forcing condom use (even though she wasn't fond of the need for them) and keeping herself physically fit and protected. While the clubs wouldn't officially promote her, due to legalities, some of them recognized that her antics also brought in customers, and wouldn't discourage it either.

While living in Seoul, in a tiny apartment she could just barely afford at the time, a bee flew in between her lips into her body, and she developed the ability to control temperature in and around herself. Since then, she's been on a whirlwind ride following job after job in the secret world, aligned with the causes of the Dragon. Never quite understanding what it all means, but she is following along nonetheless because regardless of it all, it sure is an adventure. Just like out of the books she used to read. NSFW Details

The particular bee that gave her these powers did not slip in between her mouth, but instead chose another path in, through her lower lips. This had a few additional effects. Her already high libido was raised to seemingly nearly insatiable levels, which she considers mostly a blessing as she can now have more powerful orgasms more frequently, without getting tired nearly as fast. The inconveniences are worth it for the additional pleasure, in her mind. And it removed that darned need for condoms, as she can no longer be infected by STIs or become pregnant. The former being amazing, in her opinion. The latter she considers convenient, for now... One day she may want to see if that can be reversed though.

I quite encourage sudden and surprise RP. If I'm unavailable to respond to it, I will let you know OOC or make up an excuse IC if possible. Sometimes this can be difficult as there's no good reason my character wouldn't want to respond in kind, even if I can't or am not up for it OOCly. But in general spontaneity is fun and encouraged.

By sudden and surprise RP, I mean if you find a way to, and have an inclination to, have sex with Sarali with no warning, please feel free to do so. While I am not a fan of rape or hurtful sex, with her libido she essentially would happily consent to any pleasurable act, and will respond with glee if she finds herself surprised by someone suddenly giving her pleasure.

Sarali's phone number is available, without her knowledge, scrawled on various bathroom stalls and elsewhere throughout the world. She can be contacted this way. There is also a slightly delayed livestream available online, currently without her knowledge, that is displaying her at all times. It is publicly accessible but not widely advertised. Using this, one could track her estimated location and current activity quite easily. ((For this purpose, I have auto meetup request acceptance turned on.)) The drone that provides this livestream is Orochi controlled, although Sarali doesn't realize this. She thinks it must be Dragon provided, as she has been given minor control over it with her phone, using it to take snapshots and the like. It was intended by Orochi as a prototype "ward runner" to see how the Dragon faction's inner workings operate, but the Dragon allowed it to continue working through the wards and to watch Sarali constantly. This way the Orochi and others watching can learn exactly what the Dragon chooses to feed to them, and the Dragon can siphon data off that by feeding them specific data and observing reactions, subtly. This is all unbeknownst to Sarali and all she knows is that this drone started following her at the same time she was recruited into Dragon, so it must be from them, she assumes. NSFW Details

The scrawlings of her phone number are usually accompanied by various lewd sayings, claiming such things as "For a good time, call Sarali" and the always eloquent "Free fucks here", and the like. Also, as you may have guessed by getting this far into my profile, much lascivious activity is picked up on the aforementioned livestream. Sarali would be fine with this if she did know about it, but she doesn't yet, and advertising of the stream is actively removed online by the Dragon, keeping publicity of it to primarily word of mouth channels only, making control and data collection easier. Many of her toys like her "cunt cobra" and egg vibrator can be controlled by an app on her phone and remotely via the viewers of her stream. Sarali just assumes the app is unreliable, but overall enjoys the surprises it gives her regardless.
Retrieved from "http://wiki.swlrp.com/index.php?title=Sara_Li-Khilana&oldid=2556"
Categories: