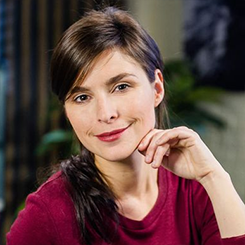 Sanneke DeJaegher is an Illuminati diplomat/negotiator employed by Cerberus. Her full name is Sandrijn DeJaegher; 'Sanneke' is a nickname. She has no middle name. She was born in the township of Kessel-Lo, in the province of Flemish Brabant, in the country of Belgium, on October 30th, 1981...at least, on paper. She grew up in a middle-class household; her mother (Anna Vandeverre) worked an English teacher in the city of Antwerp and her father (Martin) was an government worker (ambtenaar) for the Flemish government in Brussels. She is an only child.

Physically, Sanneke is a tall, attractive brunette in her late-thirties. Once an Ealdwic resident, she resided in New York City from 2016 to 2018. In 2018, she changed residence to somewhere in South America; the exact location (even which country) is classified. She dresses chique without fail, be it club-wear leather or professional Prada, with skilled makeup and tailored clothing. She wears a wedding ring: a titanium band with a single, flush set black spinel.

She's a desk worker, but her physique makes clear that she works out often. Sanneke speaks English fluently, with a mixed British/American accent. A good ear can tell she's not a native speaker of either variant. She speaks French with a Brussels accent, and Dutch with a native Flemish (Brabants) accent. She can make herself understood in (very) basic Japanese, Spanish, and German.

She began working for the Illuminati in 2004, at the beginning of her Bachelor's education. While attending school, she worked parallel in a small Brussels-based lawfirm (Smedt, Cherny, & Associates) that was associated with Team Blue. She was part of their contract negotiation team, and specialized, off the books, in wining, dining, and charming clients into signing lucrative contracts that weren't always in their best interests. Her skills at working people quickly become apparent, and after she received her Bachelors degree she was re-assigned to the main Illuminati office in Brussels. She worked there from 2007-2013, primarily focused on EU, EEA, and EFTA-related diplomatic tasks. In 2013, following the events in Tokyo and a very concerning incident within Cerberus, Sandrijn was re-assigned to Ealdwic as a Human Resources professional to help turn the company around and rebuild it in line with new managerial direction.

In early 2014, Cerberus restructured, and Sandrijn became 'Director of Operations', a position which she held until approximately December 2014, when she resigned due to personal reasons. She continued to be employed by Cerberus Solutions as a diplomatic and negotiation specialist until December 2015, at which point she resumed the position of Director of Operations. She held the position another two years until summer 2017, when she both permanently resigned from the company and went on approved sabbatical from active Illuminati duty.

Despite said 'sabbatical', Sandrijn is well-known among the Illuminati due to her high-ranking position and skill as a negotiator. Many heads of Illuminati companies, especially those operating in Europe, are familiar with her at least in passing.

Sanneke's father is deceased. Her mother, Anna, is alive and unaware of the Secret World and believes that Sandrijn works in 'international business'. Anna retired in 2018 and moved to the United States to live closer to her daughter. Sandrijn does not have any siblings. Her grandparents (on both sides) are deceased.

Sandrijn has an 'active' romantic reputation and has, at various times, been romantically linked with dozens of individuals, inside and outside of Ealdwic. She is openly bisexual, although her primary relationships have been with women.

Sanneke has decent visibility amongst the European (EFTA, EU, UN) legal circles due to her previous position in an high-profile law firm and her continuing presence in the business world.

She bears a striking similarity to an American executive Kathleen Hunter, who founded and served as CEO of Hunter Entertainment until her functional retirement in 2013, and complete departure from the company in 2015.

Those involved in 'the lifestyle' may recognize Sanneke by face, if not by name, from specialty clubs in New York City and London. She almost always uses the alias Huntress. In particular, she has VIP status in The Serpent Rooms and Club Eclipse.

Sanneke is a career Illuminati, and has been with the society for nearly 15 years. Anyone who deals with the 'charm and negotiation' side of Illuminati dealings is likely to have heard of her.

She is, of course, strongly affiliated with the Cerberus company, having worked with them for the previous six years.

Sandrijn is known to have several 'cross-color' friends and associates in other factions, and despite her Blue loyalty, seems usually willing to judge a person on their merits rather than their uniform.

In North America, she inherited a small network of contacts and compromising information regarding various demons who her former assistant, Lucy Crown, helped smuggle out of the Hell dimensions and set up with some level of life on Earth. For those powerful enough or fortunate enough to pass as human, this could mean a comfortable job behind a desk at a government agency; for those less able to disguise themselves, perhaps field labor on a farm where no one cared.

In Hell/Sheol, Sandrijn once had a known and very cautious truce with a succubus known as Our Lady in Iron (fully: Our Lady in Robes of Iron with Lips of Coral), who was formerly a fairly significant power on the plane after displacing and taking over the realm of Duke Hazarkiah. Sandrijn brokered a truce between Cerberus Solutions and Our Lady in Iron, and remained in cautious contact for several years. The truce remains in effect, but as of late 2018, Sandrijn and The Lady seem to no longer be on speaking terms.

Players who have characters of demonic background are free to assume that they are aware of or connected to either of these, if they would like to use it as a roleplay hook.

In March 2016, Sandrijn has joined the ranks of the Immortals after fulfilling a contract with the Sumerian goddess Nanshe, alias Nina Iravani. Sandrijn is technically a very new, inexperienced, and low-powered Sumerian demigod. As such, she is affiliated with the Sumerian pantheon. She is thus supernaturally 'related' to Alicia Villicana (Sumerian: Amarenzu). Sandrijn's Sumerian name is Kala

Players who have characters of divine background are free to assume that they are aware of all of this, if they would like to use it as a roleplay hook.

As a very minor deity, Sanneke possesses some extraordinary powers. These are largely on-par with, or weaker than, most Bees!

Sanneke's primary 'divine domains' are related to hope and love, with minor abilities related to dreams and the element of water.

Note: It is completely up to the other player/character whether these abilities affect them in any way at all.

Love Domain: Sanneke has a positive aura around her which inclines people to like her (in D&D terms, people react 'one category more favorably' than they normally would). She can, by force of will, affect people with Fascination (a type of charm resulting in the person developing a desire/urge to curry Sanneke's favor and please her).

Hope Domain: Sanneke has an air of leadership around her. (In D&D terms, people near her gain a morale boost). She can, by force of will, affect people with Rally (likewise a moral boost / bolster against fear). This power is more effective on small groups than individuals. Additionally, people are often naturally drawn to her when they are in times of struggle or despair, and will seek her out for support or open up to her about their problems, without conscious knowledge of why they do so.

Water Domain: Sanneke has water mastery, including the ability to detect, purify, and shape water (by taking advantage of and enhancing its surface tension). She cannot breathe water, but she can swim expertly and, by using her 'water shaping' abilities, effectively walk on water. Her ability to water shape means that she is effectively immune to drowning so long as she is conscious. She is also physically resistant to the effects of electricity and electric shock.

Dream Domain: The 'Dream' domain seems to have developed spontaneously from Sanneke's mortal struggles with her nightmares. The vast majority of times when she dreams, those dreams are now lucid, and she can, while dreaming, connect to the dreams of others. This ability can be blocked by wards, interference by stronger dream-related entities, or sufficient mental training on the part of the dreamer. While connected to another person's dream, she can use it to, at various levels, either show up as 'herself' or send symbolic images (a dream about a bridge might indicate a difficult decision ahead, or a struggle or challenge to overcome to 'get to the other side').

Sanneke's 'sending dreams' is not limited to pleasant dreams, and she is capable of sending graphic, horrifying nightmares.

Sanneke's largest and most glaring weakness is that, beyond her own personal strength and reflexes, and her abilities with water.... none of her powers lend themselves to combat or defense. Her strength comes almost entirely from the loyalty and love of the people she surrounds herself with, who can and will protect her at the cost of their own lives. However, if isolated from her followers (and lacking a conveniently placed body of water to manipulate), Sanneke hasn't enough 'divine power' to so much as unlock a door, and must rely on her enhanced strength and reflexes until she can contact her followers to assist her.

Relatedly, Sanneke can die. She is immortal in the sense of ageless and ever-living, but her physical body can be killed. After death, Sanneke resurrects similar to how a Bee'd individual resurrects, although it takes her much longer (measured in 'days' rather than 'minutes').

Sanneke's 'dream' domain developed from her own nightmares... which can and do 'escape' into reality and become physical manifestations capable of direct physical harm. While her lucid dreaming means that her own nightmares are much fewer and further between... when they do occur, they are conversely much more powerful, and much more dangerous, than they were prior. Sanneke's manifested nightmares almost always target her as the object of their animosity.

"A Series of Moments"

"The End of Something"

A silver tongue and a knack with people has propelled Sandrijn from law firm intern to millionaire executive. Marrying into the Blue-blood Vanderbilt family certainly didn't hurt. Rumors say she's made deals with Hell and Heaven alike, and that there's a lot of dirt under those manicured nails. Dollars and drugs change hands at exclusive parties, with more than stock options for sale.

The truth? She smiles.

Darling, please. Even if I did, do you think I'd admit it?