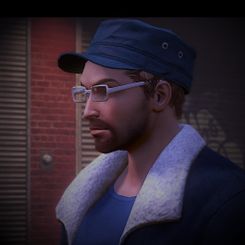 Samuel Sanders, known on many social media sites as "ObscureRhymer", grew up in rural Florida. He is the scion of one of those once prominent Southern families that has rotted into decadence in the sultry heat of the American sub-tropics. After his parents died in a car crash he was reared by his grandmother who was affectionately know as "Big Mama Sanders". His early interest in poetry (an interest considered unmanly among his kith and kin) stayed with him into his college years where he majored in creative writing. His graduation came just in time to see the retirement savings of nearly a whole generation evaporate and with them all chances of finding a job outside of manual labor. Having been given stories of the heroism and gallantry of his forbearers with his mother's milk he joined the Army as an Infantry Officer. He served for six years, seeing some of the most wonderful and most terrible parts of the world before deciding to hang up his camouflage coat and pick back up his pen.

He always thought those stories about his family where old wives tales...