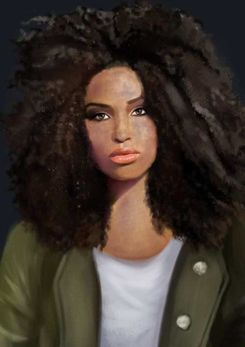 With a Lithe build and average height it may be easy to not notice Samaria, if it werent for some of her features that stick out. Standing at only 5ft 4" and weighing in at 102lbs. Her build seems toned, with some light muscle. It shows she goes to the gym, though isn't in peak physical health, yet.

She carries a scent of a smoker with her, usually seen with a rolled up cigarette while outside. She carries a lighter that leaves no open flame.

Her hair is a dark brown, and seems full in volume. Big curly locks in most social circles but on lazier days it tends to be tied back into a tight bun. Her button nose seems well placed on a heart shaped face, and she could've been considered cute by magazine standards if it wasn't for the burns.

Her face is matted with burn scars that seem to of reached the majority of her face. They follow down to her neck at least before being covered by clothes. Blister scars seem to of diminished over time but are still present and linger, and the discolouration of her face makes it hard to miss.

- Trained in a pole-arm, mainly glaives and Spears, she likes to try and keep her distance. She mainly uses a SMG as a secondary ranged weapon.

- Has bouts of pyrophobia

- I am not the best at photoshop, and the current picture will do until i find time to learn how to better represent burn scars. Original can be found at https://www.deviantart.com/martadewinter/art/Afro-girl-385623874