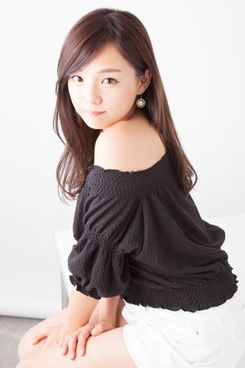 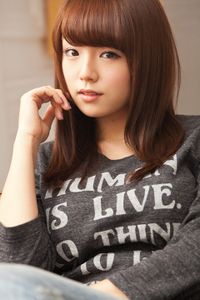 Sakuya, in a rare moment of relaxation.

Sakuya is an attractive woman of Nisei (an American born to Japanese immigrant parents) descent. She is slightly more buxom than the norm, and tends to favor wearing her hair long or at shoulder length, often with some minor lightening. A baseball shortstop in high school and college, her figure still reflects an active lifestyle and rigorous exercise. Practical where she must be and chic where she can be, she prefers tailored skirt-suits and neat coiffures in the office, and jeans, sneakers, and bulky longcoats in the field. Off-duty, she prefers jeans and sweatshirts (usually with UC Berkeley School of Law or San Francisco Giants logos), although she's known for expensive dresses and shoes on date nights.

Prior to receiving a Bee, she was nearsighted. She still occasionally uses zero-prescription glasses to project a "stern librarian" air when needed. She can be seen to wear a pair of green jade magatama earrings at all times; those who are magically sensitive will note that these serve as elemental foci. 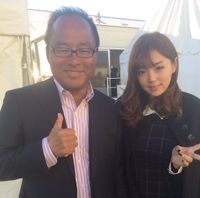 Sakuya with her father George, shortly before her graduation from law school.

Sakuya's grandfather, Raizo "Ray" Kobayashi (1917-1986), had been a decorated staff sergeant in the U.S. Army's 442nd Regimental Combat Team during WWII, but faced widespread racist oppression upon his return from the war. Nevertheless, he persevered, turning the family restaurant into first a booming local fixture, then expanding it into a successful local chain. His brother Keisuke ("Casey"), on the other hand, chose to relocate to Toronto with his new wife, taking a job with Husky Energy. This caused a rift between the once-close brothers that was not healed until late in their lives. (Casey's own grandson, Russell, would go on to join the RCMP, and later become a Bee himself.)

Sakuya was born to Ray's oldest son, George, and his wife Lauren; later, she was joined by her sister, Lisa, and her brother, Ken. She grew up in a loving and politically active household (George and Lauren have been active in the local Democratic party since their college days). At an early age, she became impressed with the strong female figures in her life (her mother runs the business side of the restaurant chain, and her mother's best friend and her unofficial aunt Donna Lo is a well-known attorney), and decided she wanted a career where she could make a difference. Wanting to follow in "Aunt Donna's" footsteps, she set her sights on law school at Berkeley. She was active both academically and socially in high school and college, playing shortstop on both her high school and college baseball teams and meeting most of her close mundane-world friends while doing her undergraduate studies. While studying contract law, she met Robert Donnelly, and they quickly fell for each other and married just after graduation.

Sakuya at her 2006 wedding to Robert Donnelly.

After graduation, Sakuya applied to and was hired by Bay Area Legal Aid as a legal services attorney. She dove right in, quickly distinguishing herself with diligence and sheer ability. The work was rewarding, but the situations many of her clients dealt with had a wearing effect on her. Robert, having gone a more lucrative route with a different firm, was not unsympathetic, but his focus was more on their financial well-being. The philosophical disconnect, combined with the stresses of their jobs, began fraying their relationship, revealing incompatibilities that neither of them had noticed before. One stormy argument in May 2010 led to them sitting down and facing the uncomfortable truth: theirs was essentially a college romance that had run its course without them noticing. They were amicably divorced by summer's end, and remain on fairly friendly terms.

In early 2012, not long after the Tokyo Incident, Sakuya was approached by some local businesspeople to help with an INS issue. While it seemed a little strange, it wasn't unheard of, and the fee they offered would knock a big chunk out of her mortgage. With some minor misgivings, she agreed to help.

Naturally enough, it proved to be anything but straightforward. What should have been a matter of a few re-submitted forms turned into a multilayered mess that almost seemed like... a kind of controlled chaos. A hallmark, as she would learn, of the Dragon. When the dust settled, two of the businesspeople who hired her were dead, and a third was facing criminal charges. As for Sakuya, she was being sequestered in a seedy hotel room in Oakland, as a couple of smirking Yakuza (later discovered to be extremely low-level stringers for the Dragon) showed her a doctored DVD of she and one of the dead businessmen in a hotel room together. As she seethed silently, they blithely told her that she worked for them now, and there was nothing she could do about it.

They were surprised, if not wholly unprepared, for her to pull a Glock 26 out of her purse. They were completely unprepared for a Bee to choose that moment to bind itself to her. After that, they wouldn't need to be prepared for anything ever again.

When she stepped out of the motel room, the Yakuza riddled with icy flechettes, she came face to face with a group of mute monks who threw a bag over her head and hustled her into a van. When she was able to see again, she was sitting in a room with a Korean woman in a military-esque uniform, who wore a cool expression and spoke in clipped tones. She identified herself as Bong Cha, and told Sakuya that she had valuable talents, both professionally and 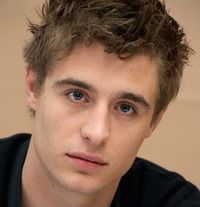 Sakuya is unchanged in her SWL incarnation.

The logo of the Stardust Initiative (frequently abbreviated to TSI by its members). 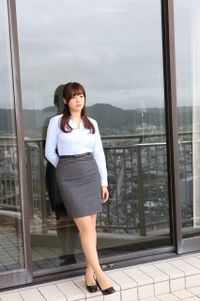 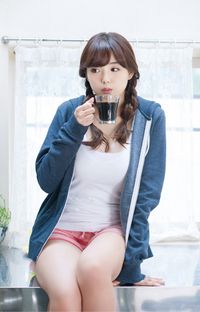 Never get between Sakuya and her morning coffee. Never.

Sakuya often projects a quietly snarky, dark-humored demeanor. Part of that is genuine, having evolved as a defense mechanism against both the mental and emotional rigors of her chosen profession, and against her experiences in the secret world. It largely serves, however, as a shield for her idealistic and generous core.

Working with the ethical and optimistic Stardust Initiative has helped bring some of her real self out again, and she relishes the chance to do some real good in the secret world. Still, the secret world has hardened her to some degree. She is quite willing to deal violence (or, better, legal or bureaucratic manipulation) in the pursuit of a genuine good.

Sakuya believes in keeping her professional and private lives at a remove from each other (as much as possible, anyway). Consequently, she rarely uses her quarters in the Initiative's headquarters, preferring to reside in her Alameda home.

Sakuya's car, which sadly gets little time outside its garage these days.

When not grappling with the legal conundrums and paperwork that the Initiative generates, Sakuya enjoys spending time in her hometown of San Francisco, both with Michael Henley and her other coworkers. An avid baseball fan (even if she rarely has time to play anymore), she enjoys taking in San Francisco Giants games when time permits. A child of restaurateurs, she learned to cook at an early age, and is quite capable of producing a near-professional quality meal of Japanese or Japanese/American-fusion cuisine. She's also an amateur gearhead (if not to the degree or inclination of her co-workers), and enjoys taking her tweaked 1998 Toyota Supra out for a spin whenever possible.

Sakuya has grown into a frighteningly effective combatant. Her specific talents lie in:

Her preferred fighting style combines both firearms and magic, using the latter to shield herself and her allies, or harry her opponents, while setting them up for precise and devastating gunfire.

Your character may have encountered Sakuya if:

You may wish to RP with Sakuya if: