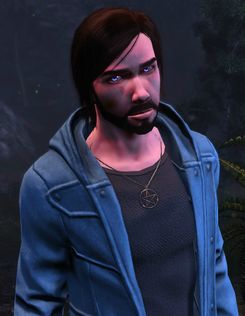 Robert "Solon" Drake is a cybernetically enhanced marksman and hacker associated with the Illuminati.

Robert lines up a shot.

Robert's early life was as a young, studious engineer on compulsory military service in a northern Eurasian oblast during the USSR period. When his workplace was seemingly raided by the expected political opponents of the time, Robert was spared and conscripted into an early incarnation of the Manticore Research Group, who sought to keep his mind and expertise intact throughout many R&D cycles. While never subject to the anima-touched conditions to be a candidate for the Mitsubachi or Project Odyssey over time, the first of many experiments were conducted on Robert, as he became an involuntary test subject and consultant among the many human-like droids in Orochi's fleet, from bodyguards to babysitters.

Decades later, Robert was seized by the Illuminati---after lengthy periods of Q&A and reprogramming, was bestowed the Americanized name "Robert Drake" for the first time, and thrown back into the field as an agent with the know-how to infiltrate Orochi sites across New England, Egypt, and Transylvania.

Liberated from his lifelong captors and creators.

Robert was eventually recaptured by the Orochi Group, but discovered by his future wife, Elana Drake, through a separate Orochi-related venture of her own. Elana assisted Robert in the excruciating removal of the cyborg casing that had rapidly overtaken his body after recapture, and left the facility together with dozens of neutralized Orochi staff lining the corridors of their exit. Married since 2016, Elana and Robert maintain a home in Guernsey financed by her estate, but are often travelling together solving large and small cases--and disseminating their findings to both their factions.

Robert speaks a pithy, formal dialogue of English through a linguistic implant in his brain, but is known to break into his native Russian when under fire. As a human with various cybernetic enhancements spanning decades, he is capable of incredible accuracy and rapid deduction in combat, with a quick adaptation to both cutting-edge and antiquated technologies of his youth. When his conscious self is heavy and weakened from installing updates to his synthetic neurology, he enjoys playing the electric organ to pass the time.

Robert is a member of Horseman Resources. He is most often caught in the field associating with agents carrying the following names: "Aeryl", "Deodand", "Manifesto", "Mangaspirit", and his wife, "Hestian". 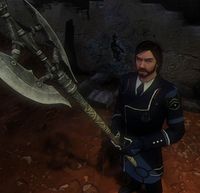 Robert in his Faction uniform.

Robert Drake as a character is essentially an NPC, but played by Solon since 2012 beta. Solon is the creator of the Untold Stories Mission Editor[1], which allows for easier mission-making in Untold Stories, a mod created by Super Jenius.

Robert is named after Robert Putney Drake from The Illuminatus! Trilogy.

Robert's callsign/codename is based on Solon[2], an Athenian lawmaker.