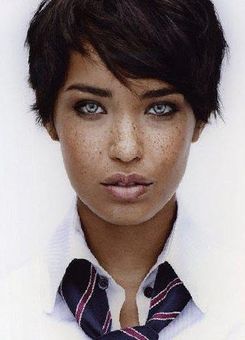 Reia Endellion was born Reia Gomez in the small town of Tiller, Oregon. Her mother was of mixed heritage and her father was from the island of Puerto Rico. Growing up on the land her father had purchased as an early retirement from being a physicians assistant, her life was just short of the American dream. Her father wanted to style himself a vaquero despite never having set foot in Mexico. Her mother was from Portland was was a typical example of 'Keep Portland Weird'. Through her, Reia found a love for mythology and the occult rumors that she never knew more than fiction, theories, and historical pseudo-science and her conversion to the Wiccan religion.

Due to a genetic trait on her mother's side, Reia's eyesight withered drastically in middle school and resulted in both limited vision without glasses and bleaching of the color of her irises. She came out to her parents late in High School after her first romantic break up; much to her father's disappointment. She has two blood related siblings, an estranged older brother and younger brother.

While perusing her Masters Computer Securities, with a minor in Occult History, she met the woman would later become her wife, Lieutenant Tania Endellion in 2008. Four years later, they were married, and had a simple , happy life together. In the summer of 2014, she lost her wife after a mission to locate children kidnapped by Boko Haram, as part of the US-Israeli task force. She remains in contact with her sister in law and father in law, despite her wife's death. Captain Endellion was buried with full honors in Arlington National Cemetery.

Further parts of profile are under update.

The grieving for her was long and difficult, resulting in a two year long downward spiral of drug addition rather than face the reality of the situation. Rehabilitation, support groups, and time eventually allowed her to start her life again. Accepting a job position for Sigma-Aldritch in London gave her a chance for a fresh start in life, as well as opportunity to see more of the world that she and Tania had promised to tour together.

After Heathrow, she had asked her cab driver to take her to a location on London that would welcome strangers from across the pond. The bleached color of her eyes, however, lead the cabbie to misunderstand how literal the comment she had given and took her to Ealdwic, where she still resides. Two days after finally unpacking, she ventured to the local pub which she found amusing: The Horned God. Inside, what she originally thought was some one in a costume was Cricket Crone and other members of the Toolbox branch of the Illuminati and the start of her exposure to the Secret World.

Since then, she has become a member of the Toolbox and the Illuminati in a very mundane fashion as a simple Information Technology expert, well out of her depth in the twists and turns of the Secret World. In the process, what she believed were growing nightmares both in clarity and intensity were the buddings of Astral Projection; to which she is still attempting to learn to control.

Recently, after she was cleared for field duty, an unknown person or persons within the Eye sent orders to her to deploy to Kaiden for creation and penetration of field networks to prepare for rapid deployment of those able to withstand the Zero Point Pathogen. An encounter with the entity known as 'The Black Signal' left her shaken, distraught, and possibly infected by the Filth. Gaia, however, had other plans. Due to the nature of her projections, the Bee that had been chosen for her had been less than successful to locate and bond with the woman previously. Representing the Buzzing, another Chosen of Gaia came with a crate of similar delayed Bees at a time that spared Reia from untimely heading to the Summerlands. Now, she has to come to grips with the new found knowledge and responsibility that comes with the gift.

With recent events within the Secret World changing, positions on staff being reorganized, Reia's role was been changed from the IT division to half of the HRIA, Human Resources and Internal Affairs, office of the Toolbox. Excelling at the position,

Reia is easily embarrassed, surprised, and still earning to the ways of the Secret World, Reia is often out of her depth with the new amounts of knowledge. In the mundane world, everything was simple and clear, and she knew how everything worked. With new discoveries to find and theories to learn, Reia is often looking through the Toolbox's archives. She slips into Spanish when frustrated or angry. Passionate on subjects dear to her. Tends to avoid confrontation and new contact with unknown people and is at odds with desire to learn more with staying safe.

Reia is a former member of the Illumnati, it's sect known as 'The Toolbox', and can count the number of people she trusts on one hand, thanks to her time in the said groups.. She is also a fan of several DJs from both Raido Free Gaia and Happy Tentacle Radio