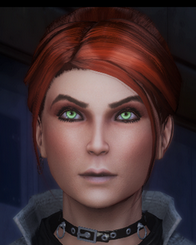 (This information is easily gleaned from public records)

Raina Anwyl is a citizen of the United Kingdom. She was born on December 12th, 1983 on her family estate in Wales. She was home-schooled and did not attend any public or private schools. She attended the University of Oxford and received a degree specializing in Architectural History. She is a socialite; part of an old wealthy family. She works as a part-time hobbyist researcher for the Scarlet & Cross Institute.

Non-Templar, Secret War Affiliated (For those who are initiated but not officially Templar)

Raina Anwyl is a known Templar agent. She has participated in various operations in the Secret War between the three major factions on a few separate occasions. She has always been known to act honorably and within the confines of the Council of Venice's rules of engagement involving the factions. She has never attacked another council-affiliated faction outside of sanctioned battlegrounds, and has never been involved in any attacks on peaceful supernaturals. There have been allegations in the past that she was involved in several incidents involving Orochi assets; however Orochi has since liquidated the assets involved and formally written them off as being rogue agents not acting with Orochi backing;therefor no charge of wrongdoing has ever been formally levied against her.

Raina Anwyl is a member of the Scarlet Order, the official Templar-sanctioned cabal within the Scarlet and Cross Institute. Those who have access to Templar personnel records would know that she is sometimes referred to by her codename, Dyrnwyn, in mission reports where her identity needs to be redacted. She is a part of their Security division, primarily involved in defending SCI assets and personnel. She is also a free agent, capable of choosing her own investigations and pursuing them in support of the overall Templar mission. The Anwyl family has supported the Templars for hundreds of years, since before the Crusades and every generation has provided soldiers, funding, or both. The family head is responsible for training those within the family, and the Anwyl's methods are known to be harsh and brutal. Most recently, her father Gwydion Anwyl, has served as the head of a special unit of the Templar's military arm that is responsible for "scorched earth" duties. They have been decommissioned for the past 6 years due to Temple Hall's change in public policy regarding purges.

Raina has shown reasonable proficiency with firearms (non-Anima focus, but with Anima-based limited ammunition). She is especially proficient with bladed weapons, internal-based Chaos magic, and hand-to-hand martial techniques. She has shown signs of mid-level Anima manipulation proficiency (faster healing, increased strength and speed compared to baseline human), but nothing on the magnitude of a Bee.

Templar HQ has been informed that Raina has recently (Within the past few months) become one of Gaia's Chosen. This was observed when she was found on the verge of death in the Sahara desert, and died shortly after being retrieved; only to be reborn a short time later at a nearby Anima well. It is not currently known what circumstances led to her initial death (as it is well known that Bees are notoriously difficult to kill,even before one considers that they do not stay dead) as she has no recollection of how she came to be in the desert in the first place.

Prior to her retrieval in the desert, Raina had shown no signs of being a Bee. It is known that she received harsh combat and survival training from the age of 8 onwards, as is customary among the Anwyl family. Part of this training involves an awakening of latent Anima manipulation potential, present in all of those within the family to varying degrees. Raina's ability in this regard was average at best, and she usually relied on technique and training to overcome her foes. Channeling her Anima through her weapons required a great deal of energy and she usually reserved it for dire situations. Still, she proved to be a capable agent able to accomplish her missions largely through sheer force of will. It remains to be seen how becoming a Bee has changed her or will change her in the future.

Aside from her extensive training, Raina is fairly typical for a Bee. She is primarily a combat specialist and struggles with anything outside this sphere of expertise. She is not particularly analytical or skilled with deductive reasoning. Her knowledge outside of combat and supernatural hunting is incredibly limited.

Raina existed in TSW prior to moving to SWL. I am basically treating this as a "Soft reset". Her personality and history is largely intact from having RP'd and developed her over the course of several years. The specifics of that history are a moving target, as many of those I used to play with and RP with no longer play the game and I don't want to assume what their characters would do or who they would be in this unique situation. I am handling past RP history on a case by case basis (So far this has worked just fine, for instance a friend I used to RP with came back and we decided to keep their history intact and are basically picking up as though they just haven't seen each other in a while).

Finally, I am taking the current timeline as it is and attributing any confusion/fugue/anomaly as "Agartha shenanigans". So for instance, the Tokyo incident is still fairly recent (As it is in current game events)and for her this will be the first time the Filth has invaded Agartha, etc. Her memories of Tokyo are based on the assumption that she went there before the portal closed and before the Incident, etc.