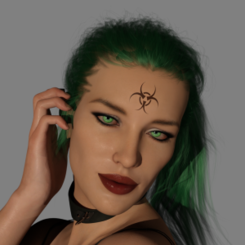 Born to her siress, Kil’Amour Lightbringer, of the Hearthfire succubus clan and her mother Tarra Shadowweaver, she was left on the doorstep of a monastery in Tibet, after her mother was killed by wolves. Rad was raised by the grounds keeper and his wife and lived and trained as a warrior and healer, specializing in fist weapons and blood magic, until she was thirteen, and came into her racial powers. She wandered the world, until she met Kyrrin Tor, while she was working as a stripper at a club in Seoul. Kyrrin was stalking a bounty at the club she was working in and got stabbed in the back by an ally of her prey. Rad healed her and fell in love with her bearing and beauty. She is rarely away from her and considers herself to be her protector. Upon achieving her manifest form, Rad learned that she had become a mated pair with Kyrrin, meaning that only Kyr could carry her baby. Rad married her mistress, September 14, 2018.

Large breasted, and scantily dressed, one would not think this woman was a threat. She has a submissive bearing, especially in the presence of Kyrrin, her mistress. Radda has a sigil tattooed in the center of her forehead, and a studded leather choker around her neck. She has three piercings, and none in her ears, these piercings are connected to an o-ring at her belly button with gold chains, and a fourth chain, 8 foot long wrapped around her waist, also connected to the o-ring, comprises her leash. Her measurements are 38/26/36.

Highly sensual, she has a very affectionate nature that is brought out most when in the presence of her mistress. Exhibitionist by nature, she is self-described as an ‘attention whore’ and is highly protective of Kyrrin. Succubus Form: Rad's manifested form differs from her normal form, her skin turns emerald green, face rounds out and ears become slightly pointed. her measurements are 40/25/38. Her most notable change is her 18 foot wing span, with soft emerald feathers. Rad's Futanari qualities are not evident under most situations.

Rad feeds off the sexual energy of those around her, storing it in her for later use. Her ability to put off an aura of arousal helps her to gain nourishment anywhere.

Rad'Asha does not really care about The Secret War, being content to spend her time with her wife/mistress dancing and pursuing their carnal desires. Following Kyrrin's lead, she performed tasks for the Dragon, and assisted in the daily running of Club Catharsis.

Kyrrin was carrying her child when she went on a mission for the Dragon and when she felt her soul-binding with her beloved shatter, and the death of her unborn child, Rad broke all connection with the Dragon, and left Club Catharsis.

After the presumed death of Kyrrin Torre, Rad threw herself into her work as a master healer at the monastery in Tibet where she grew up. Her power grows daily, and much of her time that she does not spend teaching, she is out in the world slaying filth and abominations to the natural world. With the recent discovery of Kyrrin, with no recollection of her past, in the employ of the Dragon, Rad retrieved her wife and is currently using her powers to subtly undermine the Dragon's influence within the Secret World.

While on a hunting trip to Tokyo, Rad came upon a familiar scent, and is now on a trail searching for her mistress/wife, whom she now knows is alive. Through sources on Twitter, she has followed the trail to the Dragon. Why Kyrrin has not contacted her is unknown, but Rad is determined to find out, and if the Dragon is keeping a succubus from her mate, there will be hell to pay.

My submission is my own to give. Kyrrin is the trustee of Rad's submission.

Meddle not in the affairs of Dragons, for you are crunchy and taste good with ketchup. Half-succubus, Rad is chaos incarnate, let those human pretenders try to stop her in her pursuits.