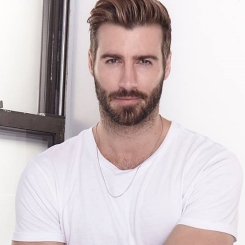 Peter Raymond Harkem (born Peter Raymond Amaruq) was born in Whitehorse, Yukon on April 5, 1985. Soon after his birth, Peter's birth parents, Phillip and Diana Amaruq, left him at an orphanage due to their financial situation. At four years old, Peter was adopted by Liam and Sophia Kennedy, and the three moved to Victoria, British Columbia.

In 2001, Peter's adoptive parents divorced due to Mr. Kennedy's drug addiction. Mrs. Kennedy reverted to her maiden name, Ms. Harkem, which Peter also chose to take. The two then traveled to Whitehorse, where Ms. Harkem tracked down Mr. and Mrs. Amaruq, reuniting them with Peter. Peter chose to stay with his adoptive mother, keeping her surname, but the two families remained on good terms until Mrs. Amaruq's passing in 2008, and Mr. Amaruq's passing in 2014.

After spending a year with his biological family in Nunavut, Peter moved to Vancouver and attended the University of British Columbia. Showing stellar academic performance, he obtained a Bachelor of Arts and then a Master of Arts degree in philosophy with a minor in music. Peter also worked as a conductor and teacher for various choirs around the city in order to support his studies. He ultimately sought to do research in the philosophy of art, but soon after he began working on his PhD, he was chosen by Gaia.

Throughout his time in academic studying, Peter fell into occasional bouts of alcoholism. This became the source of friction between himself and his mother, but as Peter puts it, "[he] owes it to [his] mom to be a better man than the one that hurt her, so in the end [he's] always pulled through."

Peter was recruited into the Templars after he was chosen by Gaia. Since then, he has stopped drinking as much. He has also shown a strong interest in magic music, quickly learning how to make magic foci out of instruments and exploring what magical effects he can draw from them.

Peter's anima, by itself, appears to be rather weak, especially in the way of his immune system. He is more vulnerable to the Filth, so in the field he relies on the constant upkeep of spells that boost his immunity. On rare occasion, he suffers from some symptoms of human diseases, such as the common cold.

Since he was introduced to the secret world, Peter has remarked that his "entire philosophy and world view has been blown to bits," though he still welcomes philosophical discussion and the introduction of different ideas. He is also passionate about music theory -- hence his interest in magic music -- and delights in discussing the construction of melodies and musical progressions.

To most, Peter carries a somewhat formal air, at times getting rather blunt or rude. He may come off as prideful and conceited, but it's become apparent that his "ego" is merely a way to cope with his fears, doubts, insecurities, and regrets. In the end, he seems to hold most at a distance and his less-than-ideal upbringing may be linked to this behavior.

However, in recent months, he has adopted a much more lighthearted and playful personality. Making the right friends has allowed Peter to come to terms with his past and deal with his emotions in a healthy way.

Two notable affiliations of Peter's are Theodore Cardon and Caomhan MacBradaigh. The three used to be roommates.