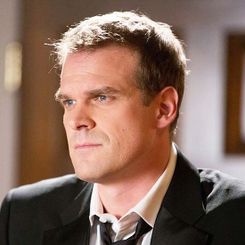 Paul Hauptmann is the only child of William Hauptmann, a high school English teacher, and Janet Oberlin Hauptmann, who emigrated to the US as a young woman from Germany in the 1980s. The Hauptmann family lived on the coast of New Hampshire in an ancestral home dating from the Colonial period. Paul’s childhood was generally unremarkable but marked by tragedy; his mother died in a house fire in 2005 and his father’s secretive nature, paranoia, and eccentric behavior alienated Paul, who left home in 2010 upon graduating from high school.

Traveling through New England with no real purpose, Paul drifted from one job to another until he reached Umber Falls, a small town in Maine, where he took work as a part-time deputy. He excelled in this line of work and was befriended by the community, eventually moving to full-time employment. In 2015 the town’s sheriff retired and Paul took the job by acclimation. By all accounts, his time as sheriff of Umber Falls was quiet and peaceful.

Hours after the Tokyo event, however, William Hauptmann suffered an incident of spontaneous combustion and died in his bed, his loyal dog only a yard away. Paul learned of the freak accident by phone, and reached the family home by morning the next day. That afternoon, he was approached by the family lawyer, a man named Phillip Leach, who wished to discuss the unusual nature of William’s will.

The entire estate and everything in it was bequeathed to an anonymous recipient in Germany. Leach refused to give the individual’s name, but hinted that Paul had a relative of whom he was unaware. There was only one exception: William Hauptmann had named his son as a beneficiary of only two things: his private diary and a lamp. Specifically, “the Lamp.” Paul was furious with his father for leaving him out of the will and had no idea what lamp the will was talking about, but took the diary from his father desk, fully intending to burn it as an act of petty revenge.

But that night, as he began to flip through the diary, he quickly noticed that certain words and pages included a cypher, one he and his father had sometimes used for private communication when Paul was growing up. Working through the cypher, Paul was able to determine that “the Lamp” -- which Paul now assumed was some valuable antique, possibly stolen -- had been buried by his father in a hidden vault inside a cave on the water’s edge. As he worked, however, suited representatives of the mysterious German arrived on the estate. They ordered Paul out of the house and searched his belongings for anything that might have been taken. They were clearly looking for something and Paul did not trust them. In the morning he snuck away from two men observing him and reached the cave, where he recovered a trunk that had been buried there.

The trunk was locked but Paul had no key and no time to find one. Resorting to force, he broke the locks off with his shovel and forced the old chest open. He was utterly unprepared for what he found there: some kind of device, a machine of unknown origin about the size of a man’s fist and giving off intense white light in every direction. Made up largely of a smooth white glass-like substance, it was nevertheless bound by thin golden hoops which encircled it. This, presumably, was The Lamp, but Paul still had no real idea what it was.

The mysterious Germans, however, had figured out Paul’s location and tried to corner him in the cave. It was at this moment that the Lamp itself became a player in the story, and not merely a treasure to be fought over. The object, which William theorized was either of extraterrestrial origin or perhaps a relic of the Third Age, merged with Paul’s body, reorganizing his physical anatomy to accommodate itself in a position in the middle of his sternum. This process was incredibly painful and terrifying, but Paul could do nothing as his ambushers watched the transformation take place. Once the Lamp had seated itself in Paul’s chest, it emit a brilliant burst of white light which turned both the German agents to dust.

Paul, in control of his own body if not the Lamp, fled on a motorcycle. Over the days that followed he was able to decipher more of his father’s journal and, in this way, he learned some of the history of the Lamp. It had, according to family records, landed in the water off the coast of New Hampshire in the Colonial era, where it had been found by Captain Rex Hauptmann, a lobsterman who had placed the Lamp in a chest and hidden it, making it an heirloom of his family. But periodically over the centuries various members of the Hauptmann family had taken the Lamp from its hold and used it, sometimes to defend the family, sometimes for personal gain, and sometimes in the interests of the Illuminati. But since the 60s, when William Hauptmann had inherited it from his own father, the Lamp had never seen the light of day. William had been terrified of both it and the Illuminati, and refused to wield it.

But the Lamp was not a simple object to be used or forgotten. It was, in some sense, alive — a sort of living machine. And it did not like being trapped in a buried chest. When Paul had dug it up, the Lamp had taken action to ensure it would not be put away again. Now the machine was merged with Paul’s body and he had limited control over it. He decided to take a radical step and reach out to the Illuminati, calling one of the numbers he found on the cellphone of his mysterious ambushers. This put him in touch with Kirsten Geary, who told him to stay put and wait for the Illuminati field agents to make contact.

But that night, Gaia chose to give Paul a second option. One of her “bees” unlocked in Paul the ability to reach Agartha. She might have sought to give Paul traditional powers of anima control, but the Lamp resisted these efforts. By morning, Paul had been taken by the Illuminati and brought to New York, where he was given Geary’s point of view on the whole Lamp fiasco and the Hauptmann family. Paul acknowledged that he needed Illuminati help if he was to survive, but he refused to become an official agent.

Paul Hauptmann, assigned the family designation “Lamplighter” by the Illuminati, is currently traveling New England and assisting local efforts to stamp out the Filth and other supernatural threats while, at the same time, learning about the Lamp and his new capabilities. He has begun to introduce himself to the Secret World and has met a handful of Templars, Dragons, and other Illuminati, as well as Council of Venice agents and Phoenicians. In his heart, he remains a good cop, but his heart is also a sentient super-computer with unknown capabilities. Predictably, this fact frightens him

Paul Hauptmann is currently on unpaid leave from the Umber Falls sheriff's office. He is well liked in the small town, where he is considered a good-hearted young man and an eligible bachelor.

Paul grew up in an Illuminated household, but did not known it. The most direct connection he had to the Illuminati was a brief stint at Innsmouth Academy, where he spent the first half of his Junior year (Fall 1999). Paul had little talent for the magical arts, but excelled at sports, and was sent home by Christmas break.

The nature of the Lamp is not clearly understood. The Hauptmann family has been its caretaker for over two centuries, and much has been written by the family elders over this time. There are two top theories: that it is a relic of the Third Age, or that it is some kind of extraterrestrial machine. This latter possibility was presumed to be true for many years because Rex Hauptmann reported a meteor shower the night he recovers the Lamp from the New England coast. However, the discovery of various Third Age relics in Egypt and elsewhere have broadened our understanding of what these devices are capable of, capabilities not out of line with the Lamp. Only prolonged investigation by experts on both Third Age relics and extraterrestrial devices would be able to verify one or any of these theories, and as long as the Lamp is contained within Paul Hauptmann's body, this seems impossible.

The Lamp emits a white energy which includes visible light but no heat. The magnitude of this energy can, at its lowest settings, blind anyone caught in it, but at higher output levels it can disintegrate a human body. The Lamp has the capacity to dispel illusions with its light, revealing the illusion as false, or penetrate disguises, revealing the true identity of those caught in its light. It has even forced creatures such as lycanthropes or other shape-changers into revealing their "true" form, though this power is not reliable.

The Lamp can communicate with Paul, communication which he feels as an emotional or simplistic desire, but it seldom does and Paul does not always understand it. Judging by the records of previous Hauptmann's, the Lamp's capacity for communication will improve the longer Paul carries or wields it.

The Lamp does not grant Paul most of the other benefits of anima usage. He would not regenerate if killed, is not immortal, and still eats, drinks, and sleeps. Because of Gaia's interference, however, he does have access to Agartha and can hear the Dreamers in his sleep.