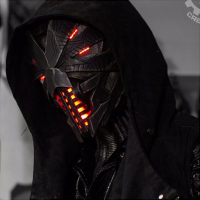 For all intents and purposes, the individual by the alias トリックスター is a male who stands at 5'8"/180 cm with an estimated weight of 130 - 140 lbs/58 - 63 kg. Most identifying features on body appear be covered by various heavy articles of clothing when seen. What can identified due to consistency is choice in attire which always includes an intricate black and red/orange colored headgear. Current analysis indeterminate if headgear has a particular purpose or is simply a mask.

Individual is armed with SIG Sauer P220 9 mm pistols, combat knives, and what appears to be various magical focuses.

Little can be discerned at this time from tweets and appearances. However, said individual's actions have painted a picture of a curious and cocky nature. Makes reckless decisions but is calculated enough to pull off the execution of said decisions.

Before first conducted incident involving ██████, ███████████ previous records and testimonies seem to indicate a quiet nature about him. No known incidents of behavioral problems occurred before incident or since. However, crimes individual plead guilty to involvement in indicate a resourceful individual in planning and a flamboyant style in presentation. ███████████'s own testimony seems to indicate a rebellious nature underneath with a particular dislike of unfair practices. A strong resolve is also noted.

On ██/██/████, prisoner ███████████ found missing from cell and compound. No evidence has surfaced involving ███████████ due to complications with communications due to the Tokyo Incident.

トリックスター's first active appearance correlate with shortly after the Tokyo Incident, lingering on the outskirts of Setagaya, Ikebukuro and Akihabara before settling on the outskirts of Kaidan. Individual has made several attempts to breach barriers. Initial attempts were met with little success The first known successful attempt was on ██/██/████, in which he made a successful entry.

Camera footage has been scarce but one of two pictures of トリックスター have surfaced, mainly around Zero's Wild Pachinko. It is unknown where individual's current residency is but given proximity, it is either within Kaidan or in the outer barrier due to トリックスター's lingering about the area. Whatever purposes of their action appears to be unknown and little is documented aside from occasional incoming data from AEGIS systen.

UPDATE: トリックスター made announcements of successful Agartha entry on ██/██/████. Tweets have indicated his travels to America but current location is unknown.