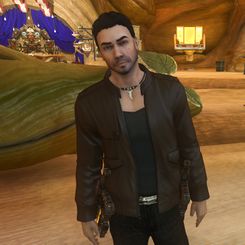 
It's obvious Mitch cares about his appearance. He carries himself taller than he is, and his lean proporsional physique reveals his athleticism. His hair is dark brown, almost black, and hairstyle varies between short and semi-long that he keeps tidied up in a bun at the back. 5-o'clock shadow? Well yes, this is Mitch's signature look which he maintains every day.

Mitch has distinct scars on the left side of his face, from big claws by the looks of it, a smaller scar from a cut on the right side of his upper lip and what looks like four puncture mark scars on his right shoulder. Two in the front and two in the back. All scars from before the bee.

He likes to dress casual, although not afraid of suit and tie if he thinks the occasion calls for it. He's always wearing a coconut beaded tiger tooth necklace. This necklace is very special to him. He also wears a very expensive classic wristwatch. He owns a West Point class ring, which he only uses on very formal occasions.


Mitch is a hard-working, kind, helpful and generous person. He's quiet and very private, about himself and his past. Although being an introvert (more than he himself likes to be), he has well-developed people skills and robust social relationships, but with a carefully selected handful of people that he trusts. He can be very enthusiastic, when the goal feels right, and given time this enthusiasm will grow into loyalty.

Weaknesses
Mitch can often be too humble and shy, and he internalizes his feelings in an unhealthy way. With such a strong sense of duty, it's far too easy for him to overload himself, or be overloaded by others. Then he struggles silently to meet everyone’s expectations, especially his own.

On social media he is fairly active can appear to be more social than he really is, but this interaction also drains him a little and he might have spells of inactivity.

The boy
Mitch was born and raised in Washington DC in a wealthy household and the only child of Mitchell and Liv. He has his mother's good looks and compassionate nature and she was the biggest influence on Mitch growing up. His father, almost never present. His relationship with his father has been strained for as long as Mitch can remember. He had a happy and safe childhood though, never lacking anything, except for maybe a father's love. His mother did a very good job giving her boy the best foundation she could, in preparing him for life outside the Hastings' home.


Breaking Point
Just two weeks after graduating from West Point, Mitch injured his back playing football. It looked like he'd never be able to recover 100% and so the Army dismissed him when Mitch didn't want a desk-job. He was devastated, and then on top of this another big argument, of quite many, with his father had Mitch packing and he left for Thailand.

The Thahan Phran
In Thailand, Mitch, at the age of 21, started working as a mercenary for a Thahan Phran regiment responsible for curbing human trafficking and other illegal movements across the Mekong into Thailand from northwestern Laos. Two years into his Thahan Phran service, Mitch got badly injured while on a mission in the northern jungle of Chiang Rai. Presumed dead, no extraction team came for him, but he was saved by Buddhist monks who took him back to their temple and tended his wounds.


The Monks
His physical wounds healed quickly, but when given the opportunity to stay Mitch then lived in with the monks for nearly 3 years, and trained meditation and Muay Thai in return for hard physical labour in and around the temple. He left the Buddhist temple a Master of Muay Thai.


Koh Mak
A small piece of paradise, the island of Koh Mak, located in the east of the Gulf of Thailand. This is where Mitch settled down after he left the temple. He loved the peaceful island life, and the concept of living on island time. A continuation of the mental healing process which began in the temple. He made a living working as a tour guide and a Muay Thai instructor at his own gym. This was his life, and all he wanted from it. Then came the bee.


The Secret War came as a shock to Mitch. Things he never thought could be real until experiencing it first hand. Although he understands Gaia's reasons, he is angry about not having been given a choice in the matter.

Usually it's enough to say hello and just everyday chit chat. He's a friendly guy and he's interested in your story.