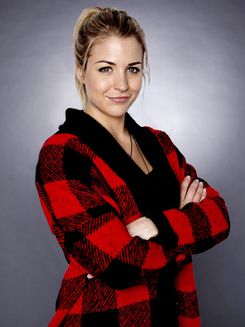 Melisende, known to all but her closest friends and family as "Melissa," was born to an old guard Templar family. Her great great uncle was Cecil Rhodes, diamond magnate, British colonialist, Prime Minister of the Cape Colony in South Africa, and founder of the country of Rhodesia, the Round Table Group, and the Rhodes Scholarship. For a century and a half, the Rhodes family has been a loyal part of the global Templar organization, contributing money to the coffers and family members to the Secret War. But although there are several exciting and adventurous Rhodes in the family line, Melissa's parents were more stay-at-home types, preferring to contribute to the Templar cause by throwing expensive charity galas and writing seven figure checks every Easter.

Melissa grew up with enormous privilege, and with the high and mighty of the Templar community passing regularly in and out of the family home. She displayed intelligence and curiosity from an early age; for example, when her parents were distracted (which was most of the time) she worked her way through their occult library, experimenting with spells and rituals which no adolescent had any business reading. Her parents finally discovered this in her 14th year when she crafted a love spell which went awry, leaving a handsome young man naked in Temple Court trying to hump a parking meter.

It was decided Melissa would be groomed for a research position, and at the age of 16 she was sent to Domdaniel College, Oxford.

"Now we shall see how a double first at Dom-Daniel avails against the private tuition of my master Bleise." Merlin, to Madame Mim, The Sword in the Stone, TH White

Domdaniel College is a hidden (or "Invisible") College at Oxford where magic, occult lore, and other aspects of the Secret World are taught. At 16, Melissa was one of the younger students there, and she quickly became infatuated with a handsome older male student. The two began dating as she focused on her studies, which included folklore and mythology around the world, British history and literature, and the magical arts. Pretty but bookish, she had a small circle of intense friendships, mostly with other girls her own age. Periodically she would return back to London to visit family or consult the Temple archives for one of her academic projects, but in general she lived on campus in dormitory housing, sneaking out to spend nights with her boyfriend. At Domdaniel she read all the classics of modern magic, her sole negative mark being in a course on Golden Dawn Hermeticism when she refused to sleep with the professor. When she was 19, she tried to satisfy her boyfriend by inviting her closest female friend over for a threesome, and during this encounter began to realize she was lesbian. She kept this secret from her friends and family, but made no complaint when her boyfriend broke up with her shortly before graduation.

Melissa's undergraduate thesis was an attempt to reverse-engineer Morgan Le Fey's famous "Vale of No Return", an enchantment which created a private pocket dimension from which no one could leave without Morgan's permission. Although she was unable to recreate the effect, the project garnered her attention among more advanced magical practitioners and her faculty mentor suggested she apply to the Scholomance. Acquiring the required letters of recommendation was a quest in and of itself, involving travel to the Hell dimensions, an aggressive letter-writing campaign to the Draculesti, and one incident of fellatio ("for academic purposes"), but she successfully won admission.

The Scholomance is one of the most exclusive and famous occult universities in the world, and Melissa's instructional regimen was both rigorous and personally dangerous. Among her classmates were demons, vampires, and (worst of all) Illuminati. She mastered the arts of elemental magic and blood sorcery while writing her PhD dissertation on the Grail myth. She graduated in 2014.

Upon her graduation, Melissa reported to Temple Hall for her first assignment. It is no great secret that the Temple has sought to monitor and collect supernatural relics around the world, and the records are full of long lists of such items which the Temple has not yet been able to find, or which have "fallen off the grid" over the centuries. Melissa was assigned to find one of these items: not the Holy Grail itself, but one of its imitators or replicas, the green stone of Wolfram von Eschenbach's Parzival.

Wolfram was a German minstrel and folksinger who composed a tale about the Holy Grail which we read today as Parzival. In that story, Wolfram describes the Grail much differently than how it was described by authors both before and after, such as Chretien and Malory. Wolfram's Grail is not, in fact, a cup at all, nor a dish or platter. It is a green stone which, according to Wolfram's tale, fell from Heaven. Within this stone, angels who had chosen to remain neutral in the war between Lucifer and God had hidden themselves. Words appear upon the stone's surface at various times, and those who can see the stone often have supernatural knowledge imparted to them, directly into their mind. Alchemical language fills the text, and the Holy Grail seems to be conflated with the Philosopher's Stone. It was this unusual object -- which the Temple judged to be not the Grail, but perhaps an extraterrestrial object or a relic of the Third Age -- which Melissa was tasked with finding.

This mission would dominate her life for the next three years. She traveled the world, beginning with Eschenbach in Germany but eventually going to some of the furthest and most hidden corners of the globe, including the Arctic, the jungles of South America, and a hidden U-boat base in the Mediterranean. Along the way, she encountered rivals and enemies-of-chance. She had a close (very, very close) encounter with a Dragon agent and assisted an Illuminati long con in order to gain access to the Smithsonian's secret archives. But although she found many tantalizing leads, had many adventures around the world, and recovered some priceless occult relics, she never even learned if Wolfram's Grail was a real object, let alone where it might be hidden.

This was the state of her quest when the Tokyo Event occurred, and she was recalled to London.

Melissa was asked to brief Richard Sonnac on the status of her assignment, and ultimately she had to confess that she had failed. No matter how one chose to measure, the Templars were no closer to Wolfram's green stone than they had been three years before. And now, with the world poised on the edge of the apocalypse after Tokyo, the Templars simply did not have the luxury to send agents on wild goose chases hither and yon about the countryside. There was a war on.

However, Melissa's track record in her quest was nevertheless impressive. Sonnac cited this in defense of Melissa when Dame Julia Tyburn insisted she should be "cashiered" and thrown out of the entire organization. Tyburn insisted that, if Sonnac was so eager to defend Ms Rhodes, well, then he could have her, and she should become a field agent. Sonnac made Melissa this offer, but she had not yet given a reply when Filth erupted into Agartha itself.

During the Whispering Tide, as this eruption has come to be known, Melissa began to operate in Agartha for the first time, recording Filth intrusions and debriefing "Bees" who went into hand-to-hand combat against Filth monsters. During this time, she submitted an analysis of the prevalence of Arthurian legends in the Secret War, specifically focusing on the ramifications of Arthurian myth for Tokyo and its clean-up. This report is called The Dolorous Stroke Hypothesis: The Tokyo Event as Mythic Re-capitulation.

In the weeks since the end of her Grail Quest, Melissa has increasingly come to believe that she has to "do more" to help Gaia, the Templars, and humanity as a whole. While still in her heart a researcher and academic, it is time for her to step up and take a larger, more high profile role.

Melissa is a thoughtful intellectual, liberal in her political beliefs but a bit old fashioned when it comes to her personal life. Since college, she has been a practicing lesbian, but she keeps this secret from her parents and working colleagues in the Temple (i.e. Sonnac). She is only a light drinker, does not do drugs, and smokes only occasionally, typically when nervous or agitated. She keeps a Siamese cat named Genghis and is traditionally feminine in her dress and demeanor, frequently wearing heels even in dangerous environments. Despite her family and Templar upbringing, she maintains an open mind towards the rank-and-file members of other conspiracies such as the Illuminati and Dragon, Council of Venice and even the Phoenicians. She seems to consider low-level members of other organizations to be sympathetic, while the upper leadership of rival groups are more culpable.

Rhodes is a skilled magician, specializing in elemental control and blood sorcery. She is physically fit, though not especially muscular, and has some limited experience in hand to hand combat, especially with improvised weapons. A PhD from one of the world's foremost magical schools, she is an expert occultist with an encyclopedic knowledge of Earth mythology and folklore. She reads Latin, Hebrew, Arabic, German, and Sanskrit.

Most of Melissa's friends and contacts are agents in the Secret War, both mundane humans and so-called "Bees", or agents of Gaia. Her parents are well-disposed towards her, and she cares about them, but their dull life and their chosen role as a Templar funding source does not impress her and she does not respect them.

Melissa is "played by" Gemma Atkinson, whose images I have shamelessly stolen.

Melissa does not use Twitter, but her player can be reached for RP (or anything else) on Discord: Sonja#8869. 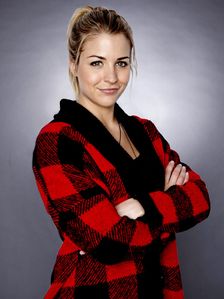 Melissa Rhodes (no one calls her Melisende) is a Templar researcher specializing in Arthurian legend. She has spent the last three years searching for a relic described in the 13th century text Parzival, without success. A PhD with a degree in magic and occult studies, she is also the author of a recent paper which suggests the Tokyo Event is actually a re-enactment of a famous Arthurian incident called the Dolorous Stroke.