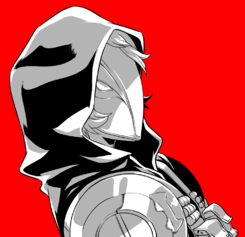 There are very few official Illuminati records of Lynnette Bowman's existence, but one generally wouldn't want to publicly acknowledge an assassin whose very existence breaks numerous Council rulings on forced recruitment and necromancy. Even as she slaughters her former colleagues the Illuminati have remained tight-lipped regarding her existence to the Council. To admit the quasi-living monster of more metal than flesh even exists implicates the Illuminati in far more than they care to be associated with. Preferring instead to deal with the monster of their own creation under the table in silence.

Presently, she exists as a haunting reminder of the arrogance of the Illuminati puppetmasters. In their haste to create an unparalleled killing tool, they instead gave their monster the strength to slaughter her captors and break free of her binds.

Physically, Lynnette is not in the least bit large, coming in at just barely 5'6" and weighing only 85 pounds with her augmentations not factored into the equation. Her form is small, wraithlike, and fragile. What little natural skin remains is ghastly pale and covered in groupings of shallow puncture scars, burns, and deep, long slashes. Despite her incredibly strenuous role as a close combat specialist, she never seems to develop any notable muscle mass in her legs.

Lynnette's form is described far more effectively by what hasn't been replaced than by what has. The only truly natural parts left of her are from the waist down, and the chest up. Her separated chest and waist are stitched together with a custom combat chassis, and her entire spine has been replaced, jutting out of her back ever so slightly.

Seven months ago, Lynnette Bowman was deployed into the Kaidan hot zone and went AWOL roughly two weeks afterward. Any attempts to contact her were met with failure, and no agent managed to find her and live to tell the tale. After six suspicious deaths of Illuminati field agents and assets that lead to an internal investigation revealing her to be the sole surviving member of her division, Lynnette was officially declared a rogue agent and had her Council protection revoked. This only seemed to make her more aggressive in her hunting, abandoning any pretense of hiding her signature. Bodies were pinned to billboards above crosswalks with promises of holy vengeance painted in viscera beside the deceased. Proclamations made that justice would be served upon the wicked. Those who had hurt her and those who had profited from her misery.

Calling in a favor with a Phoenician contact, Bowman was evacuated from Tokyo to receive medical attention. An evaluation revealed her to be malnourished, anemic, and about to die from sleep deprivation. After a brief period of rest and recuperation, she returned to Kaidan under the banner of the Brotherhood of Phoenician Sailors and was keen to prove her loyalty to her cautious new employers.

Despite her extreme capabilities for manipulation, Lynnette is terrified of social interaction on a meaningful, interpersonal level due to prior trauma from her tenure as an Illuminati assassin and agent. She manages to overcome her crippling anxiety through heavy dissociation, using her mask as a literal divider between the monster that the world sees, and the scared little girl within. Lynnette's external persona allows her to factor herself out of the immediate equation and instead play a role. Lynnette herself doesn't have to be confident, she needs only her mask to be so. Fake it until you make it.

Her external persona relies on rehearsed bravado and bombastic, nigh reality-defying charisma intended to hide any sense of fear or weakness. Naturally, this has lead to a rather poor track record with other people and has largely left her isolated. However, this is likely part of a defense mechanism to both protect herself from those who would seek to manipulate her, and those who might reject her once they see the true girl beneath the mask. Despite her skills as an actress and manipulator she does not enjoy misleading others, and believes that to use her talent for manipulation, even benevolently, would be morally repugnant.

A strong, deeply rooted sense of self-loathing permeates every single action she takes and seems to be directly responsible for her unhappiness in life. Her augmentations, somewhat surprisingly, do not seem to be the root cause of her misery. Instead viewing them as scars to take pride in and as tools to allow her to overcome the limits of her frail human form.

Lynnette's dissociation seems to have eroded away at her ability to feel in the moment, frequently causing her to make rash decisions in a firestorm of emotion to be deeply regretted for months afterwards.

She performs exceptionally well under pressure, seemingly even more so than she would when otherwise calm. Her ability to keep a cool head under pressure has rendered her an invaluable asset in covert, deniable operations the world over. However, when paired up with other agents she becomes irritable and harsh tempered. Few have ever completed a mission alongside her without some sort of confrontation.

She fiercely believes in the ideology of Carthage, perhaps a little too much so, using her revolutionary zeal to fill the hole left in the wake of a traditional social life and family structure that she believes was stolen from her.

Our wisdom flows so sweet. Taste and see...

Have you ever wondered what happens when you took five from one, Sweetling? What happens beyond the pedestrian arithmetic. The existential nightmare of the whole that no longer was? Even should you manage to return what was removed, will the numeral achieve the abstract concept of completion once more?

Numbers present an easier route of conveying complex information to the nonliving, to computers made of copper and gold instead of meat and gore. Everything boiled down to a simple series of ones and zeroes. Binary possibilities fused together into a writhing mass of data, explaining away incomprehensible nuance.

But when the binary fails? What of the decimals between human and not?

The less than human, the not quite alive.

The one that got away.

In the pitch black bowels of Tokyo lurks a terrible myth, a story that cuts to the bone. A monster of the most horrific kind. Something not quite dead, and not quite alive. Something no longer human, but far too similar to those of flesh and blood.

Fear is her paint and all of Rome is her canvas.

[LEGEND 9 MISSING] She was once a sweetling just like you, a talented child forcibly rebirthed into the hidden reality, torn from the comfort of her past delusions and made to witness every oozing sore on the underbelly of existence.

We do not play favorites with our sweetlings, all are equal under the bosom of the Immaculate Machine. The honey touched are children of the mother of mothers.

But some children do not behave.

Some do not play their intended roles.

Some play them far too well.

How many black and blues does it take to make the world a more just place, Chuck? You of all people would know.

You're batting zero for three, Chuck.

Wonder how many of them just like you are lying on the sidewalk, drowning in a puddle of obsidian and crying themselves into their final rest? Wonder who did such a thing, don't you, Chuck? Who could jam a crowbar into the door, pry it off its hinges and let loose an unending font of suffering and terror?

Why don't you ask that cute little thing on the radio? The spacy little doll with remorse in her eyes, the poor girl chasing redemption at the bottom of a bottle every night, wondering if tonight is the night she atones? Ask her who, Chuck.

Your nifty new friends aren't blue, but they're all black on the inside, and isn't that where it really counts?

The truth is you're not the hero. You're not even the hero of your own story-story-story.