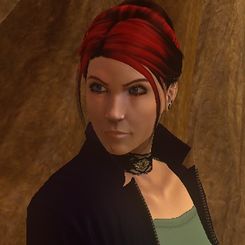 Luna is all pinched cheeks and pointed features; gaunt, hollow and sharp. She smiles with teeth showing, eyes bright and staring a little too intensely. Her movements are quick and furtive, full of nervous energy that seems too big for her body. She hides the worst of the twitches under long coats and with hands tucked into pockets. Her hair is a bright flaming red, streaking over black - long, piled up in a bun, strands falling in her face.

There are no birth records to be found for a Luna Maye in Britain; the likelihood is that this name was chosen later in life. Luna Maye is first found on the electoral register in 2010, placing her in Reading, UK at the time. Very little exists by way of social media profile, and no criminal record or enrolment at higher education can be found.

Should one be particularly determined to find out more details about Luna's early life, there are a few clues in local history. Looking through Reading newspapers, with enough searching through archives one might find an article about a Lindsey Mayfield, including a picture that strongly resembles Ms. Maye - younger, healthier, but either her or a very close relative. The article details a general knowledge competition set up among local schools; Lindsey Mayfield was reportedly the winner, with her twin Kylie coming second place.

Further searching for Lindsey Mayfield finds a birth certificate from 1989, but little else. Kylie Mayfield still resides in Reading.

Luna Maye was acquired as a Templar asset in August 2012, although at first in a mostly observational capacity. While the agent that discovered her had no doubt that there was something unusual about Ms. Maye, she wasn't initially inducted in the specifics of the Secret War until more could be established. 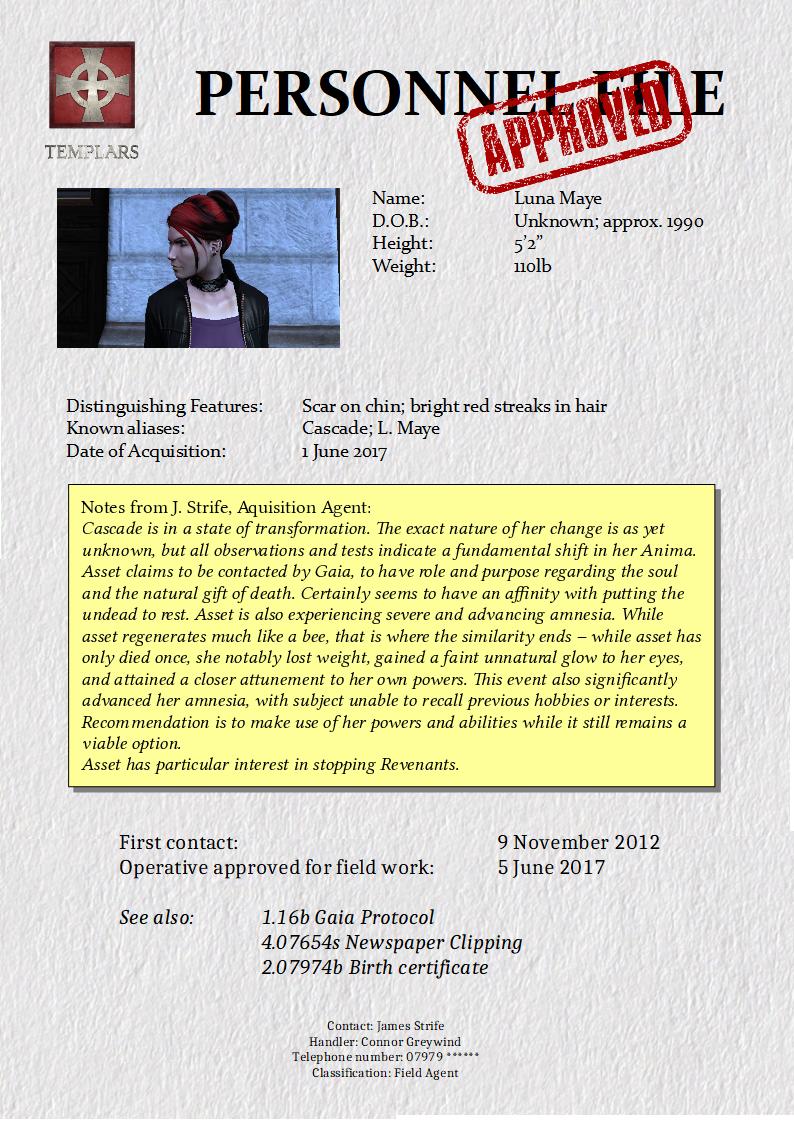 In 2017, after a traumatic death led to some additional changes, it was decided that Ms. Maye should be approached in order to induct her into the ways of the Secret World before any of the other societies found her. After a period of five days intensive debriefing, she was approved as a field agent.

Subsequent Records: ((To be completed))

The Templar asset Cascade has mostly been working in private facilities and away from the major factors of the Secret War until June 2017. Since then she has been noted as frequently staying in Ealdwic.

An agent of Gaia, Cascade is not believed to be a bee, per se, but somehow otherwise brought under the buzzing influence.

Cascade suffers from supernaturally related retrograde amnesia. This condition affects both episodic and semantic memory, although the latter to a lesser degree than the former. With some prompting, semantic memories can be recovered; thus far any attempts to recover episodic memories have failed.

The memories lost are not specific to a certain time period, and many are not consecutive. Ms. Maye is still capable of recalling some details from childhood, although she now cannot recollect her parents' faces, nor does she recognise them when view photographs. Interestingly, even after they have been pointed out and identified, this information is quickly lost again, suggesting that the erasure is an ongoing process. Cascade has suffered two deaths in her time as a Templar asset, and both saw significant memory loss as well as more physical transformative side effects. It is theorised that, should she die sufficient times, the consciousness that is 'Lune Maye' would cease to be altogether.

Special Note: Luna Maye is not currently able to recall her previous name. The name she currently holds was chosen before her transformation began; it is to her psychological benefit not to be overly exposed to her former name or the names of her family members. Her twin is currently under observation but has shown no similar symptoms.