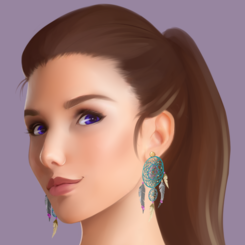 Loryne graduated from Concordia University with a B.A. in English Literature and a Minor in History, but her real passion was always outdoor sports. She wanted to share her passion with others and left her Masters studies to pursue her dreams of starting a company with her best friend Martin Petitpas. North-Star Outdoor Tours was a small but successful venture based out of Canmore, Alberta in Canada.

Loryne was on an expedition leading a group, when she became a Bee. She is somewhat resentful her way of life was taken from her, though she is eager to help where she can and has joined the Templars to do so.

She is a vampire slayer who, until a year ago was partnered with her ex-boyfriend and former mentor Joseph Reiner. She now works with Knightbridge Consulting as an consultant. Loryne has dated her Templar friend and colleague Captain Tom Dundas for four months until Loryne and Tom parted ways, agreeing that their busy lives did not allow for them to devote enough time for each other.

Loryne has returned to her studies in English Literature at Oxford's English Lit. department to be able to enroll for her Master's degree in the fall.

With taking on the role of Mentor and partner to Dane Magnussen who was her former Masters thesis professor, Loryne has put her Maters degree in English Literature on hold for the moment.

After the departure of two close friends Maya Stroi and Matt Drake from KBC, Loryne went on to follow Shanni to form the Delphic League as well as her new partner in the Templars, Dane Magnussen.

After Shanni's departure and the dismantling of the Delphic League, Loryne returned to her full time occupation of working as a blood mage healer at her clinic, leaving her new husband to the training of new slayer recruits with the Templars, though the two of them still hunt and slay undead and monsters together as active members for their Templar Faction.

Weapons Primary - A pair of Indian Katars, beautifully ornate and offered to her by her former mentor and boyfriend Joseph Reiner. The blade is thick and strong enough to pierce most armour.

Throwing knives - four throwing knives enchanted to do burning acid like damage to undead and vampires. The knives are etched with magical symbols preventing anyone who is not a sanctioned Templar vampire slayer from using them.

Specialty Blood Magic Primary: healing, Loryne uses her own blood and anima as catalyst for her blood magic, reinforced through the foci of bloodstone in the rings of both hands and the bloodstone talisman jeweled cross she wears.

Secondary: Blood and anima barrier, Loryne is able to place a blood activated anima barrier to take partial damage until it exhausts itself. She is able to place this barrier around herself and others, but placing the barrier around more than one target weakness the barrier's efficiency. (The more people have a barrier, the weaker those barriers are.)

Tertiary: Thermal sight, Loryne is able to see thermal readings of living beings and acts as a kind of infra-vision. She is also able to use this to determine the extent and severity of injuries before she treats them.

Shamanism: Loryne maternal grandfather taught her simple protection rituals against harmful spirits, she is also able to enter a trans-like state and astral project herself to fight in the spiritual realm with proper preparation. She has never attempted to take another with her however. She is also able for a very short amount of time to enter a transient state between the mortal world and a plane beyond, allowing her to dimension walk and reappear at a very short distance away. A sort of phasing between space and time.

Wilderness and survival training in the Canadian Rookies.

Loryne Atwin, more commonly known by her French name Loryne, is a young woman of the Huron Wendat Nation. Standing at 5`6 her body is well toned from practicing and training in outdoor sports in Canada`s northern climate. She usually keeps her dark brown hair tied in a braid or pony tail for practical purposes. Her wide, slanted deep blue eyes have fooled people into believing she is part Asian. Loryne`s tattoo of her Aboriginal namesake and spirit animal is on her lower right back.

At times seeming cold and distant, at other times loud and brash, Loryne does not apologies for who she is. She lets few people get close, due to personal tragedies; physical and emotional traumas. She is, however, loyal to a fault when it comes to her friends and loved ones.