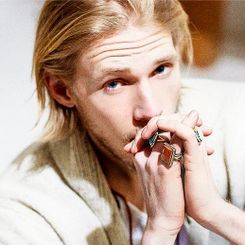 Kerian is quite a classical human male, with all the bits where they need to be. He is tall and slender, giving him a frail appearance one could see as severe anemia when adding his ashen skin to the mix. He also sports huge bags under his sapphire blue eyes, supposedly caused by his smoking habits and his inability to sleep consistently. About the face features, he prefers to wear his hair at shoulder length or tied. As he is plagued with early hair whitening, he is known to dye his hair in whichever color he fancies at the moment to hide this condition and extends the treatment to his facial hair, when he does not shave them. If you happen to see him naked, or atleast bare-chested, you will witness a skeletal figure, as if his bones could pierce his skin at any moment. His torso is also covered in bruises, ancient or recent, and multiple scarred cuts you could guess as self-inflicted. On his left shoulder, you might spot a colored tatoo and, upon closer inspection, you would recognize an assemblage of pixels in various shades of blue, without any recognizable pattern. The tattoo seems unfinished, as if the goal was for it to cover a larger area, either the whole upper torso or around the neck to join the right shoulder.

Kerian is, for all intents, mute. He never developed an ability for language, stricken by disease before his first year, leaving his vocal chords unusable. Instead, as the mean to put some distance between him and the world, he prefers to express himself by texting his interlocutors or writing with alacrity on either a notebook or a tablet. When communicating, he displays a highly cynical, if not amoral and jaded, vision of the world as he seems to place no limits to what could and should be accomplished to further the goals set to him at the present moment, be they its own or the mission's.

Kerian has a Ph.D in Biology, with a specialization in Toxicology and a knack for Nano-medicine. Though he is more versed in research, it is not uncommon for him to actually take part in medical procedures and he can perform diagnosis and surgery with ease. He was born with a knack for blood magic, letting him perform what the mundane could only call "miracles" by pulling patients from the brink of death through minor control of their vital signs or slow purge of poisonous fluids.

When he became a Bee, Kerian's magic abilities skyrocketed. He gained an even greater control of the living world through blood magic, developing some kind of disease and poison manipulation. He also proved himself proficient in elemental magic, especially everything related to lightning magic and electro-magnetism. When it comes to conventional weapons though, the only weapon he could really defend himself with would be a trusty scalpel or a simple pistol with which he would aim at the well-known squishy bits of the body.

Civil clothing : When he is not working, Kerian tends to dress in a casual manner. He prefers to wear plain and dark occidental-styled clothes but is not above more extravagant articles, like shirts or hoodies plastered with the logo of some weird geek reference. He also keep fingerless leather gloves on at all times, adorned with a hive pattern. Sometimes, out of laziness, he might appear in his work clothes. As a Vali researcher, this outfit is composed of the telltale white coat marked with a discreet Orochi symbol and plain black clothes.

Field clothing : While in the field, Kerian wears light body armor with Kevlar padding in the chest area, ample cargo pants with gadgets-filled pockets, and well-fitted steeltoe boots. He sometimes adds a leather jacket over his shirt for the sake of it. Depending on the situation (and whatever he feels like wearing), he will choose between two types of glasses : Either black ballistic glasses, or black protective glasses akin to the ones climbers use, all fitted with an earpiece and an HUD. Lastly, his outfit is completed with a pair of foci-embedded gloves.

TRANSMIT - initiate the plague signal - RECEIVE - queue the panacea syntax - OUR WORLD IS BLEEDING... AND SO ARE YOU - unleash the Grey Goo cadence - COME ON, GET DOWN WITH THE SICKNESS - achieve the Namtar prerogative - WITNESS - Kerian Pierce

Ages pass, mortality endures. The fight everlasting, the endless stream unfolding never to be vanquished. Robbed of his curse and boon, he now faces the current of his brothers' fading, a cyan serpent head crawling on his skin. He knew before the honeyed rapture, cutting our secret with the painful shine of stainless steel, and yet before came under a watchful Eye. A preordained destiny was laid out, only to be twisted by a serpent's calling. It resonates of long-gone Eden.

Gods of disease and spirits of plague, such eyes were set on the child from his first breath. Cancerous blood coursed his veins before he learned to walk, cursed first years spent under a glass bubble, a deterrence that yet became lifeblood to him. He stared in Nergal's eyes, embraced the purulent arms of Namtar, and denied them their prize. The child recovered but never spoke, sacrificing the potential of a songbird for a chance at life.

Followed by illness, the damned child clawed his way forward. Determination made results to blossom, akin to the flowered steps of an ancient druid, and bore a champion of life. Cursed no more, he now walked the aseptic corridors that should have been his tomb. But curses he still had to fight, for life is always branded with death and its unutterable scourges. He cut open the Reaper and shone his light in its putrid veins, draining the rancid humors and trapping its fragments in countless glass prisons.

[To be completed through player interaction]

- The player lives in France, and thus plays on European time.

- My RP in TSW-SWL includes references to the news. It can and will reference recent events, that are sometimes offensive and/or pretty dark (Like terrorist attacks), from the character's point of view. Please keep in mind the difference between IC and OOC.