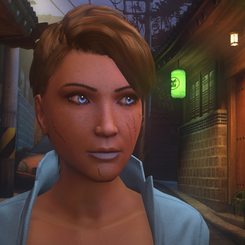 Enjoys immortality for the most part, but could really use a hug.

Keira, a Boston local, is the daughter of two immigrants. Her father was Japanese, while her mother's family hails from India.

She was a quiet kid, growing up, and didn't make friends easily. She spent the majority of her free time playing video games, and browsing the Internet on the family computer... When the phone line was free, anyway.

For about five years after high school, she found herself in a limbo of low-paying jobs and unemployment, moving between different apartments in cities and towns all over Massachusetts. She got into a heated argument with her girlfriend at the time about her apparent lack of direction in life, and after a fight, they broke up - on bad terms.

Keira was devastated, but continued to earn enough to pay the rent. She fought her growing feelings of depression and loneliness with bar-hopping, video games, socializing on the internet... She eventually got to a point where felt like she was starting to get somewhere in life.

And then one night, while she was sleeping, she swallowed a bee. The Secret World, with all of its pain, horror, hardship, and excitement takes over her formerly ordinary life.

And she wouldn't have it any other way.

Perhaps some day Keira will discover for herself the fact that her family has been sporadically involved with the Secret World for generations. The Dragon had been watching her for a reason. At least one paternal relative, from every other generation, was inducted into the Dragon as a (mortal) agent or informant. On the maternal side of Keira's family, many of the women and some of the men served the Council of Venice, the Templars, the Dragon, or even fought as mercenaries of the supernatural.

As Bees are rare even during times of crisis, it's hard to say whether anyone in Keira's family is an immortal like her. It might explain why the factions of the Secret War have taken so much interest in them, however...