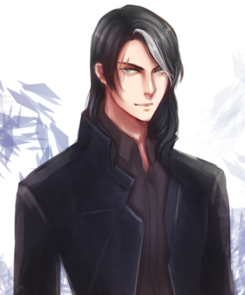 Eyes: Blue (Due to ocular albinism)

Physical Description: Junren appears to be a fair-skinned man of Chinese origin, standing at 5'11 feet tall. His physique is nearly one of a swimmer's built, honed through years of training and combat experience. He wears his ebony hair long, sporting streaks of pale hair along his bangs and sides of his scalp. Occasionally, he ties them up in a neat ponytail. His blue eyes bear a sharp, astute look and two grievous scars run through the top right corner of his eye and eyebrow. Junren is often seen wearing a dark blue blazer with a black shirt beneath, paired with neatly-pressed trousers and polished boots. At first glance, the man seems to give off a cold, dignified vibe, seemingly uncaring about the world around him.

Junren possesses a level-headed, dignified personality, lacking of hesitation when it comes to being critical of others. On duty, the Dragon agent seems to be composed and level-headed with the ability to handle heavy stress in dire situations. At first glance, Junren may come off condescending, no-nonsense, cold and gravely serious. Yet deep down, Junren is man of fractured mind and convoluted emotions. However, he does show the penchant for wisdom, compassion and nurturing people that he cares for. His sense of humor can be spontaneous and black.

Raised in a family of traditional values, Junren is extremely judgmental and prudish of others who do not fit in his ideals and standard. At the same time, he is not exempt from flaws himself; he can be cruel, stubborn and ruthless. Junren also seems to have an air of melancholy around him, as if he had been under vast turmoil and burden.

Junren enjoys reading, photography, researching, drawing, training, working out, practising wushu and kickboxing, strolling, cooking, travelling and surfing the net. As an artist and a hobbyist photographer, his interests delves into artistic passions, such as photography and illustrations. Junren also considers doing household chores and keeping his home extremely clean as a hobby.

Born to a family who possess the ability to see unseen ghosts and paranormal entities in their lineage. His family descended from a clan of Chinese exorcists and ‘witches’ who devote their lives to eliminating malicious paranormal entities. His father, a descendant of such peculiar lineage, is a humble caretaker of a temple, while his mother runs a small food stall.

Junren is born with ocular albinism that gives him vision problems, ironical to the fact that he possesses the ‘third eye’ to see ghosts and invisible paranormal activity with utmost clarity. Often bullied and abused by others for his eyes and eccentric behaviour on top of his family’s demanding expectations of him, Junren became a social recluse and suffered depression. Moreover, his gift and affinity for magic attracted undesirable paranormal entities which devastated most part of his life.

Nonetheless, Junren found passion in helping others and saw hope through devoting his life to bringing justice for people. After his national service conscription, Junren studied hard in police science and worked his way into the police force.

Using his gift in secret, Junren forged contracts with ghosts and demons to solve crimes and aid in his investigations which eventually caught the attention of the Dragon and he was subsequently recruited for his skills and connections to the Singapore Police Force.

Later on, he was tasked to form The Minders with a small team of Dragon agents by eventual pavings of the Dragon’s will.

- Graduated from junior college in A-levels.

- Trained in parapsychology, exorcism and minor Chinese alchemy and spells.

- Graduated with Bachelor degree in police science with military studies.

- Knowledgeable in criminal justice, investigation, psychology studies and analysis of intelligence as an investigation officer. Experienced in field operations.

- Possesses some affinity to cast blood magic, elemental and nature magic spells. Also has a gift to see unseen ghosts, auras and paranormal entities known as the Third Eye or ‘Yin-yang Yan’ (阴阳眼). 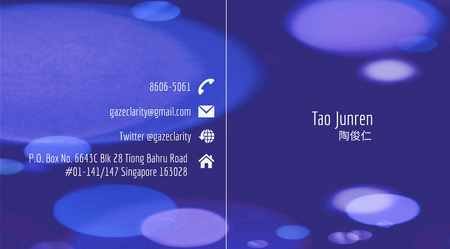 Disclaimer: All details on the name card are fictional and not real. However, the twitter is accessible and IC.

Junren identifies as a pansexual, preferring to find attraction in personality rather than gender. However, this poses a problem with traditional Asian values and causes friction with his heteronormative family and relatives. While Junren has dated in the past, he prefers to maintain casual relationships, might identify as open and is hesitant to commit to deeper relationships due to his free-spirited nature. Nonetheless, Junren firmly believes in consent and communication when it comes to relationships.

Junren deeply treasures and cherishes his friendships. Loyalty is of utmost importance to him; this also extends to his allies. He does his very best to offer kindness and assistance to each and every friend he makes. Tragically, his distrustful nature forces him to dwindle the numbers of his friend count. As raised in a traditional Chinese household, Junren is incredibly filial to his parents and family, and makes it a point to send money to parents monthly.

- Player has a high adherence to lore but also willing to be open-minded to outlandish concepts or 'grey area' lore that are not within the confines of Secret World's lore universe, as long as they show some lore plausibility.

- Does not condone metagaming, powerplay/OP and forcing/controlling other characters without consent. Please ask for permission before you hurt or maim the character during RP.

- Does not permit permadeath.

- Please understand the separation between IC and OOC. Bleedover is understandable and happens at times but acknowledge that feelings of your character aren’t your own. If such happens, it’s important to communicate with the player and work together to ease such feelings

- Player does not prioritize relationship RPs but willing to try out if the progress is natural and organic. The player wholeheartedly welcomes IC friendships, comradeship and rivalry. IC flirting is A-okay as long as parties understand the divide between IC and OOC.

- Communication is super important to player. If there's anything uncertain or needs checking, the player is open to discussion. 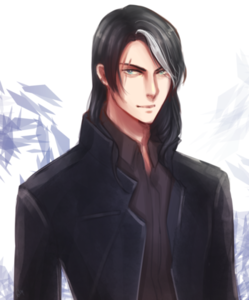 Junren was born to a family who possess the ability to see unseen ghosts and paranormal entities in their lineage. His family descended from a clan of Chinese exorcists and ‘witches’ who devote their lives to eliminating malicious paranormal entities. He found passion in helping others and saw hope through devoting his life to bringing justice for people. After his national service conscription, Junren studied hard in police science and worked his way into the police force, where, using his gift in secret, he forged contracts with ghosts and demons to solve crimes and aid in his investigations.