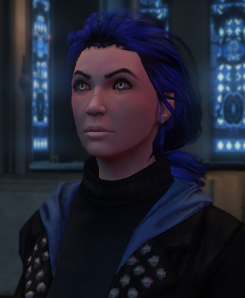 Judith was born in Poland, but her family moved to Germany when she herself was only four years old.
She grew up in Munich and has always been a loner.
Judith parents got divorced, when she was ten years old. She didn’t take the change well and became even more reserved and secret. Judith didn't have many friends and spend most of her time reading. She read everything she could get her hands on - sci-fi, romance, detective, fantasy or non-fiction. But Sam Kriegs novels were always her favorite.
At the age of fourteen Judith discovered the Internet and computers - first in the computer class and the public library, a few years later in her own room - when her parents bought her a PC.
After that she mostly lived online - in games and chat rooms, where she could be herself and never even had to talk to anyone face to face.
After graduating high-school Judith studied informatics and got a job at a local computer store. It was easy and relaxed. And Judith never had any ambitions in life. She didn’t make any plans for the future and had no dreams. She’s just drifting through life. Never feeling like she really belonged.
Her romantic relationships were as chaotic as her career path - she wasn’t really giving a damn and wasn’t even trying. So Judith was alone.
Her parents lived in other cities - other countries even: her father moved back to Poland. Her friends were getting married and/or successful around her, while Judith stayed at the outside as always. Losing herself in video games and the world wide net.
And then one night Judith swallowed a bee. And everything changed.

Judith is quite petite, slight and shorter than most girls.
She’s got grey, almost colorless eyes, an oval face with high cheekbones, pale skin with a few freckles, an old scar on her nose and a head of wavy hair.
Her natural hair color is black, but nowadays she’s dyeing it blue.
Judith doesn’t look her age, she seems a lot younger.
Her gait is light and brisk.
She bears herself well and prefers wearing casual comfortable clothes - jeans, hoodies and snickers.

Judith doesn’t talks much and most of the time keeps to herself.

Judith is a skilled Elementalist and knows how to handle a blade.