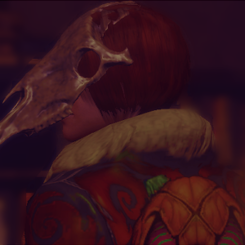 J's appearance could be described as having a paradoxical war with his outward personality: a shy personality met with brightly dyed hair and awkward clothing choices. Infact, some his own styling choices feel just a tad absurd together. Loud jackets and leather gloves paired somehow with rather professional styled glasses and rather groomed appearance.

Other than his somewhat suspect fashion choices, he is for all accounts normal in appearance. Being a Caucasian man with a fairly average height and a frame that's nothing too out of the ordinary, it's somewhat obvious he's not the most combat ready individual around. Yet his freckled skin is often marred with a few scars on a typical average seemingly to indicate he's gotten into a bit more of the whole battle thing than he likes to let on.

• J exhibits a withdrawn exterior that has flourished due to current chaotic environment. Underneath it all, he is rather grateful for any company he is given; albeit a bit more hesitant on who he lets close in recent times.

• Optimistic pessimism seems to be a growing habit as well as occasional snark. Still tries to believe the best in individuals but circumstances have revealed to him that doing so isn't always the best choice. Morals in general have becoming a topic of high conflicting nature to him.

• More than not, he is an individual who is very easily moved by the plight of others. Whether the problem be large or small does not matter to him. If he can help or at the very least lend an ear to someone else's woes, he has a hard time hesitating to do so. However, this is not something that should be mistaken for gullibility or naivety. Usually he does know the situations he gets into even if they are amongst more shady propositions for the sake of offering aid.

• Enjoys intellectual pursuit. Unable to resume his degree due to circumstances, he's taken to a habit of doing research offhand for fun.

• Somewhat bashful and humbled involving any of his abilities due to awareness that he is not only under-qualified compared to his superior but not as wealthy in acquired experienced as well. However, this also makes him highly inquisitive about others he meets in terms of learning about their experiences and generally attempting to take advice to heard.

This page has been marked as a work in progress.

The information on this page is incomplete and should not be relied upon as accurate or official. Please check back later.

Any history provided seems to be anecdotal in nature. Little in the way of evidence seems to suggest Johnathan Fitzroy actually exists. Not to mention, it is incredibly difficult to pin J as Johnathan Fitzroy, as most of his identification papers and verbal conversations have him going by the name Jay Weiss.

Whilst supposedly being a Templar from assumption, he actually doesn't appear in any records. For all intended purposes, he seems to be a nonperson when it comes to the secret world. Despite being fully aware of this, he gives little to no information as to why.

If you are a high ranking Templar official with access to problematic Templar members hidden on the official record, you may have heard of a Johnathan Fitzroy. However, in his current incarnation, he acts quite a bit different than his previous identity. Thus making it just a tad difficult to identity J as the former especially since he identifies as someone else.

Giving a Bee a near dead body to attempt to work out the nature of was perhaps a mistake. He has a lot of abilities a normal bee would exhibit including being hard to kill permanently and anima powers. However, some of these are a bit suspect and to be noted below:

• It takes him longer to regenerate and heal after being killed than most bees. Multiple days--- even a week or two at most. Healing also seems to be a dodgy aspect. His ability to heal others and create damage seems just fine but his own regenerative abilities are diminished compared to normal bees. Thus seeing scars on his body in the process of healing is the normal rather than the exception.

• Anyone who is capable of noticing the Zero Point Pathogen in minute to moderate quantities will notice something odd about him. Despite the Bee's best attempts to mold his physiology to combat it, he's more susceptible to it and other supernatural ailments than other hosts. (In example, may or may not have attempted to drown himself while in Kingsmouth under peculiar circumstances.)

• On the otherhand, due to his occupation and actual invested interest in learning -- he's very diligent about listening to The Buzzing. Thus, given OOC permissions, he can and will learn random factoids about others by listening to them. This is up to you, the other player, what you want him to learn if anything at all. Afterall, despite the Bees interest in gathering and distributing knowledge, they might give different priority to different facts. Even if J learns of things, he won't readily utilize it either or even acknowledge he knows anything unless situations bring themselves up to do so.

• Most of his anima skills manifest in a decent grasp of blood magic, with minor talent in focusing anima into firearms or as pyrokenetic focused elemental magics. However, is not truly professionally trained in firearms so much as shoved out the door with basic training and everything else was learned off-site on assignments.

Of course, one can only trust word of mouth for this as the necessary documentation also happens to be missing.

• Master of Humanities at NCH

• Fluent in English and somewhat basic reading comprehension of Polish, Latin, and German.

• Will likely be a bit awkward, especially given this is my newbie attempts at roleplay and understanding writing. However, I am happy to discuss things and work things out.

• Would like consent to go both ways in terms of roleplaying and usage of abilities; thus if you don't want something used just bring it up. I am more than willing to work out compromises and such.

• Avoidance of permadeath if possible is appreciated.

• Preference towards non-ERP situations and thus would like to avoid that. May consider pending on circumstances.