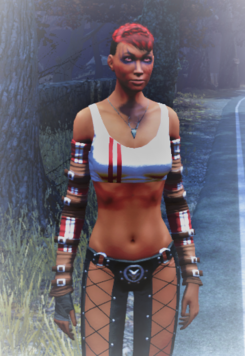 Unusual, strange, not normal, suspicious. All words Jamie has heard during her relatively short life when it comes to her appearance. Being taller than most men or women, with a toned, clearly conflict-experienced body of a fighter, and blood red eyes and hair, she can understand those assumptions. It doesn't help much that a dark tattoo is covering her eyes, giving off an eery feeling to some, or that she doesn't hide her scars much. In fact, Jamie hides never much, mostly showing her dark skin off, always having a faint glistening of sweat on it, indicating that her body temperature is higher than normal.

For those sensitive to it, her aura is celestial, with slight traces of demonic and mortal within. Her soul, on the other hand, appears to be hidden, at the very least more than just well protected.

Although she might come off as brutish and rude first, Jamie is a friendly person who likes to interact with people and have some fun. She's anything but shy, sometimes even crossing lines of privacy, which, however, has to be determined if it is on purpose or unintended. Somehow, she seems to register a persons kinks, preferences and disgusts easily, being a P.I. probably helps with that. Unsurprisingly, Jamie is a lesbian, open and casual about it. Unsurprisingly, in this case, because she quickly experienced that her height and stature is intimidating to many men, however, she would have been one anyway.

Born on the 19th January 1993, Jamie Lamat was the child of a german engineer and an egyptian doctor. She spent most of her childhood normally, going to school, playing with friends, taking a muay thai course. However, her life changed for the first time when her mother told her of the heritage she has. Not only a doctor, Jomana Lamat was a priestess of the goddess Ammat, companion to Osiris and guardian of lost souls. Jamie was to inherit her role, and furthermore, become a "maebad alwsy", a temple guardian. This was revealed to her when Jamie was eleven years old.

Three years later, on her fourteenth birthday, Jamie took part in a ritual, to be ready and prepared for her duties. The ritual involved a dangerous, potentially lethal part for the young teenager, engaging a "alruwh hisada", a soul reaper, in a fight of life and death. With wits, tricks and brutal efficiency Jamie managed to overcome the beast and steal its powers, taking them for her own. She became partially immortal, a temple guardian of Ammat, and from then on, her life changed.

Quitting school, Jamie, with the blessing of both father and mother, began to wander the world, learning of its secrets, discovering the truth behind many myths. She began investigating strange cases no police would take on, making a name for herself in affiliated circles, until, with twenty four years, she was lured by an exceptionally alluring chinese woman to Orochi, inevitably joining them in the war for humanity, using them as much as they use her.

With this, her normal, even "mortal" life came somewhat to an end. With seventeen years, Jamie fell victim to an unusual, unrecorded illness, pushing her to the brink of death. Her soul had already left her body, when Ammat and Osiris infused it with energies of their own. Once back in her body, the true meaning of the fight and control over the beast became aware to her: Only a body infused with the demonic essence could bear the immense engergy surging through her, has she now become a demigodess.

In her lifetime, Jamie has learned different martial arts, Capoeira, Muay Thai and Krav Maga. She uses mostly a combination of them, attuned with clawed gauntlets, while utilizing her magical abilities to manipulate her adversaries souls, drawing on them, and throwing her enemies off balance. When it comes to it, she could reap out a soul, sending it to Ammat for her to devouer, but she generally tries to avoid that.

Jamie refers to herself as a "Demigodess", which is certainly not far from truth. She was born as the child of two humans, became one with an ancient egyptian beast and got infused with celestial power, spoken to by the gods as "daughter". She sees both human and gods as her parents, refering to either as mum and dad. It allows her to withstand fatal wounds aside stabbing of her heart or beheading her (in theory, at least - she didn't try those), increases her natural regeneration, speed and resistance to most things aswell as she ages far slower and almost unvisibly compared to normal humans, making the theory of a long lifetime appearant to her, at least.

If you are aware of the secret war before the event leading to your affiliation, you might know of Jamie Lamat due to her P.I. work. A link to her website will soon follow!

Dragons might easily have heard of the giant in their midst.