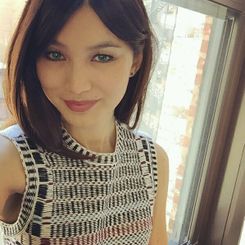 Hanako Cellars is the child of a now-deceased Templar operative (Name Redacted) and a temporary liaison from the Jingu Clan by the name of Satomi Fujibayashi. By her parents request, she was completely unaffiliated with the order's affairs for the majority of her life. Up until the age of 17, she was unaware of the existence of the Secret World. However, she came into contact with Templar operatives when she was almost killed by the spectre of a murdered college friend. Her parents, seeing they could no longer hide the truth from her, inducted her into the order and she continued her formal education under the order's funding and endorsement.

At the age of 19, Hanako's father was killed in the line of duty and her mother returned to Japan to the other members of her order. The circumstances of Hanako's father's death are still under investigation. Hanako was cleared of any suspicion in regards to the circumstances of his death, the knowledge of which is held under tight restriction by the Templars; not even Hanako is aware of why or how her father died. Being that she no longer had a home, she was provided with a flat in Ealdwic by the Templar order where she continues residence to this very day.

At the age of 21, Hanako undertook her first formal assignment post graduating from university with a '1st' in a History Degree. She has been subject to extensive firearms and self-defence training and has since shown her tenacity and resourcefulness in the field. Hanako's resourcefulness has been recognised by multiple handlers of whom have been responsible for her. Her skills with firearms and investigative tasks is something to be noted and she has already undergone many solo operations including resolving occult disturbances, recruiting new members, and assisting in cross-order matters.

In recent times, since the surge in bee recruitment within the secret societies, Hanako has found less and less application of her skills by her employers and has instead been relegated to training roles - her missions and foreign excursions cut back massively. In an effort to keep up with field work, she applied for a position at Knightsbridge Consulting and, after a successful interview, she is now a consultant for the firm.

Despite a lack of magical aptitude, Hanako has displayed a willingness and ability to accommodate for any shortcomings by use of intuition, technology and wit. She is highly capable with electronic systems and most forms of technological engineering. Her knowledge has thus far proven to be an even stronger weapon than those issued to her.