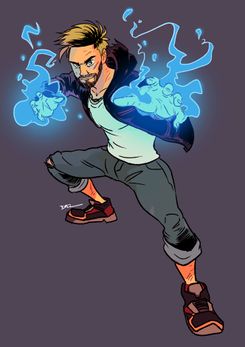 A slim, blond man with boyish looks. More athletic than he looks. He tends to wear a mix of stylish and comfortable clothes, choosing formal wear only for work.

Hadden seems to be friendly and outgoing, with a playful and carefree streak. However, it's not uncommon to see him switch moods quite suddenly under certain stimuli. He has a dry and sarcastic humour, often aimed at those he dislikes. He is quick to smile, likes long walks and hiking, and has penchant for drinking and dancing.

He is gay and poly, and has a very short tolerance for homophobes and bigots.

Hadden is extremely enthusiastic about art, design, and architecture. He also seems to have a lot of knowledge about geek culture, fantasy, and science-fiction, although he also says he’s a newcomer to the genre.

Hadden was adopted at the age of 8, after having been found abandoned at the Capulin Volcano National Monument.

He lived most of his like in Oakland, CA, and was awarded a BA in Visual design in 2011 from the California College of Arts.

Hadden's induction into the secret world is highly classified, and nothing about him can be found in the period from 2012 to the end of 2016. If asked about it, he'll say it is "complicated". He is covered by the same protection offered to all Bee agents by the CoV and the big three, although it is unclear who is his sponsor.

After receiving a nearly deadly injury in combat, Hadden spent several weeks in a coma, coming out of it in April of 2017. He spent the following months in recovery and rehabilitation before going back into action.

Hadden spends most of his time tending to the ranch and property known as the Cleft, located somewhere in the whereabouts of Carlsbad, NM. People who have been around for a while might know the place as the residence of the Templar agent Ian Pertwee, of whom Hadden is a self-declared "second cousin, twice removed, on my mother's side".

He started working for Knightsbridge Consulting in July 2017. When Craft Ramsay retired in June of 2018, Hadden and Mayahuel Bailey took over as Senior Consultants.

Hadden presents himself as a Bee, although he has a peculiar connection to Gaia and most of his powers actually come from ‘outside’.

He is well-versed in both kickboxing and handguns. He is also very skilled in improvising disguises and a certain measure of social engineering.

His main power allows him to manipulate raw anima, crafting into 'skeins', which he uses to make lassos or spins for area attacks, or temporary weapons such as spiked gloves and kneeguards. He can also use the raw anima for light and warmth.

Hadden has also become an expert in glyphs and warding, especially spells related to privacy, confusion, and moving undetected.

This is a soft reboot of my old character Ian 'Atrus' Pertwee. Hadden comes from another universe and has all of Ian's memories, but is his own person with his own interests and personality. His link to Atrus is kept a secret except to a select few, so your character will not know about it unless explicitly told.

While I like to keep a good IC/OOC separation, I like to be friends with my long-term RP buddies, and I do think that a certain level of OOC connection helps to make better RP.

Due to time zones and gaming hours, I'm mostly available for RP on Twitter, chats, and Google Docs, but I can definitely be in game too.

ERP: I'm not against it, but it depends a lot on the feeling with the other character and their player, and if it's something the RP needs. It should not be the main focus of the RP, for sure.