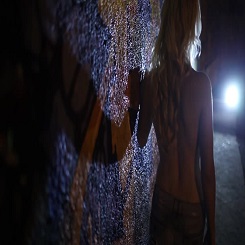 Niamh crossed the Western Sea on a magical horse, Embarr, and asked Fionn mac Cumhaill if his son Oisín would come with her to Tír na nÓg (the Land of Youth). Oisín agreed and went with her, promising his father he would return to visit soon.

Oisín was a member of the Fianna and, though he fell in love with Niamh during their time together in Tír na nÓg, he became homesick after what he thought was three years. Niamh let him borrow Embarr, who could run above ground, and made him promise not to get off the horse or touch Irish soil.

The three years he spent in Tír na nÓg turned out to be 300 Irish years. When Oisín returned to Ireland, he asked where he could find Fionn mac Cumhail and the Fianna, only to find that they had been dead for hundreds of years and were now only remembered as legends. Whilst travelling through Ireland, Oisín was asked by some men to help them move a standing stone. He reached down to help them, but fell off his horse. Upon touching the ground he instantly became an old man. He is then said to have dictated his story to Saint Patrick, who cared for and nursed him until he died.

Niamh lived peacefully in the Land of Youth until the Tokyo event. The tides that brought willing souls to her father's domain suddenly turned outwards, ejecting Niamh and the other celestial beings from their home; sending them towards earth. Most of them did not survive the fall, and those who did were left cut off; forced to find a vessel to contain them.

The sky was dark, vacant and imperfect - just like the world it covered.

Nobody ever thinks of death, really. We imagine it as just something that happens to other people, something distant and far away.

But what if there's something... Else? What if in some cruel twist of fate you could be stuck somewhere in between?

People like to imagine death as something we have a say in - something we get to decide. Death waits for nobody. Death is not a luxury, or a gift. Death is a thief in the night, stealing currency whose worth we know not how to spend.

Late into the night, Evelyn was working a case. Not unusual for her, as she had pushed any inkling of a social life away along with her fiance when she accepted her promotion. "This will change everything for you, Evelyn," the words rang in her head for months. Her Captain had barely spoken to her during her entire four years in that department, outside of half hearted “hello”s and weekly meetings, but was suddenly interested in upgrading her to homicide.

She pulled into the case lot, her V8 engine rumbling quietly as she brought it to heel. The old structure was shaped like an arrow head, though the vagrants undoubtedly occupying it were anything but sharp. The many exterior windows were boarded up across all three floors, using cheap particleboard and trash bags. Evelyn took ahold of her car door handle, keeping her eyes fixed on the front of the building... and hesitated. This was bound to be the latest in a series of false leads, tying into the kidnapping of a murder vic's infant. Jessica Taylor was stolen from her parents just a week before. No signs of a break in, nothing on traffic cameras. Just a missing baby, a dead father and a rightfully hysterical mother.

Evelyn shut her eyes for a moment, lost in thought. A part of her, the part that doesn't allow anything altruistic to exist in her world, weighed the possibility that her promotion may have just been a stunt to add diversity. Regardless, she ignored it, as it conflicted with her forced sense of self confidence and duty.

Evelyn opened her eyes, and stared into the night. It was just before dawn, and she hadn't had an ounce of sleep.

It was beginning to occur to Evelyn that she may have been assigned this case as a cruel form of punishment; forced to pursue leads that go nowhere for the rest of her career. However, the suggestion was pushed to the back of her mind, and she pulled on the door handle, the door shoved away from her with a firm thrust. It creaked quietly in protest, subconsciously reminding her of the man whose head she slammed it into months prior. Her boots scraped against the cement as she stepped out of the safety of her cruiser, her eyes on the building.

She approached the door, making sure to check the surrounding windows one last time, and reached out with two fingers to open the door. She pushed on the door, and it let out an old creak and whine, the old boards giving way to her minimal effort. The moonlight flooded into the large space, illuminating the room and acting as the only source of light cast on the sea of trash and building debris. Evelyn quickly scanned the room and drew her pistol from her hip, flicking off the safety. Her boots clacked against the old tile as she took a few uneasy steps towards the other side of the room. Before she knew what was happening, she was struck over the head with a baseball bat, rendering her completely powerless in a matter of seconds. As the tile rushed up to meet her, in an instant, Evelyn tensed up and squeezed the trigger. A round erupted into the room, the muzzle becoming a spotlight for her attacker and the bullet an elusive set piece missing it's mark. "It's no use." A dark voice whispered. Her body became paralyzed from the blow to her head. A simple mistake was going to cost her everything.

Evelyn blinked, and it was as if the earth moved underneath her. She lifted her head, having been asleep on the booth table, she was seated in a warm, empty coffee shop. Her eyes scanned the room; it was a rather small place. The smell of freshly brewed java held heavy over her, making her feel rather relaxed. The walls held a vintage look, cheap wallpaper clinging to them without much effort. An older television set sat comfortably on the counter within her immediate field of view, so she let her eyes fixate on it. "Just a bad dream." She thought to herself, placing an elbow onto the booth table to prop her lazy head up as she stared at it. It took her a few moments to realize in horror that the screen was broadcasting a first person view of ...her. She was standing over the corpse of the man who had attacked her, his body burned to a crisp with the only remaining identifier being the bat he struck her with. "This can't... Be right." She thought, struggling with the reality of it all. She turned to her left to climb out of the booth, when she saw it. Her eyes briefly glanced at the front of the shop, before quickly snapping back to the entrance.

She slowly got up, taking a few weak steps towards the glass. It was just... Space. Distant stars, and an endless void. She began backing up, tripping over herself and falling to the floor. She turned around, climbing to her feet. Evelyn approached the television, sitting on the same counter broadcasting what appeared to be her moving about the empty building. The figure abruptly stopped, shifting it's stolen gaze to a nearby mirror. It was Evelyn in every aspect except for her hair; it now appearing to be golden blonde instead of dark brown. The figure smiled at her, before the television cut to static.

Niamh blinked, taking a few steps away from the mirror to conceal herself from it as she kicked off her shoes and began walking into the night.

The sky was dark, vacant and imperfect - just like the world it covered.

Nobody ever thinks of death, really. We imagine it as just something that happens to other people, something distant and far away.

But what if there's something... Else? What if in some cruel twist of fate you could be stuck somewhere in between...?