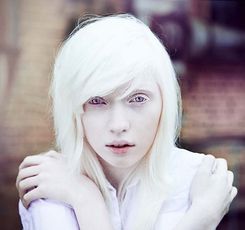 Elsbeth Snow was raised in New Haven, CT by an aunt and uncle, Sebastian Isaiah Snow (deceased) – an architect – and Elenore "Nell" Angela Snow (deceased) – Professor of Anthropology, Yale University. A birth certificate at Tale-New Haven Hospital gives her date of birth as August 9, 1996 and lists her stepparents as her birth parents. Elsbeth Snow is an only child, and she has no known surviving immediate family. Her stepfather was the nephew of Hera Snow (believed deceased) of Boston, MA, heiress to the Snow fortune.

Elsbeth Snow suffers from oculocutaneous albinism and a number of associated health issues, including poor eyesight (photophobia, amblyopia) and sensitivity to ultraviolet radiation.

An exemplary and highly intelligent student, Elsbeth Snow was to have begun Yale University in the autumn of 2014, of a full scholarship. In high school, she demonstrated an aptitude for music, chess, mathematics, and athletics. In 2013, she received a perfect score of 1600 on her SAT and has a recorded IQ of 161.

Sebastian and Nell Snow were both murdered in July 2014; Elsbeth's Snow's whereabouts during the eight months immediately following her stepparent's deaths is currently unknown.

In February 2015, Snow appeared in Darkside, Ealdwic, panhandling and living on the street. What's more, she seemed unable to speak English, speaking instead a strange, guttural tongue that proved to be Ghūla (the language of the ghouls). She was found to be in possession of Richard Sonnac's business card and brought to his office by a Templar agent. Suffering from a high fever, bacterial pneumonia, and malnutrition, Snow was admitted to the infirmary, where she spent three weeks recovering. After the first week, she was repeatedly interviewed and made rather outlandish claims as to her whereabouts in months proceeding her stepparents' murder. Elsbeth Snow told investigators that she was taken from this plane to the mythical "Vale of Pnath," the Underworld or subterranean Dream Land domain from which the Al-Ghūl (ghouls) are believed to originate. She claimed that she was "rescued" from her stepparents attacker by her birth mother, a half-ghoul woman named Eisaa, though she refused to provide any additional details about this individual. Snow claims to have no memory of returning to Earth. Temple Hall physicians and geneticists were able to confirm that she is, indeed, a human-ghoul hybrid (one quarter). She has made the claim that her grandparents were paternal twins Isaac and Isobel Snow, though if this is true, it clearly suggests unusual temporal phenomena are involved, as Isaac and Isobel (both deceased) were only a few years Elsbeth Snow's senior. Indeed, growing up, they were her sometimes playmates!

In the spring of 2015, Elsbeth Snow became an agent of the Templars, despite opposition by some members of the Inquisition, dissenters who viewed her ghoul heritage as a blasphemy and a security risk and who pointed to the Snow family's long-standing alliance with the Illuminati. Her acceptance was facilitated in large part by the intervention of Richard Sonnac, who became her advocate during her convalescence. She was found to have a surprising aptitude for hand-to-hand combat and marksmanship, as well as an uncanny talent for mimicry. Together these abilities made her an effective candidate for wetwork and "conflict resolution." By May 2015, she had been placed undercover in Berlin, infiltrating a Neo-Nazi organization known as Schwarze Sonne. She remained active in this role until April 2017, when she was abruptly discharged from active duty.

Currently, Elsbeth Snow is employed by the London College of Music as a piano instructor.

Elsbeth Snow's final operation with the Templars, leading an extraction team in tunnels below Berlin, ended disasterously, with the deaths of several agents. She herself was left a paraplegic and blind in her right eye. Until...she wasn't anymore.

Elsbeth Snow was significantly impacted by recent "ripples" in the fabric of reality, leaving her with memories of a life she seems to have only partly lived and with physical changes she's at a loss to explain. Not only does she appear never to have been paraplegic, she is now completely missing the eye that previously was only blind, and there is a glass eye in it's place. Outside observers have noted that her hair appears to have grown several inches overnight, and there have been other more subtle changes in her appearance. Oh, and she has a tail. About six inches long, with a tuft of white hair on the end. But as far as Nell can remember, she was never paralyzed, has always had longer hair, lost the eye in her last Templar operation, and was born with the tail. Due to inbreeding with ghouls, the Snows frequently show atavistic traits and teratisms. Tails are not uncommon in the family, though six inches is a little much.

Elsbeth Snow is a secretive, private person, lacking any actual social circle. To her knowledge, all of her immediate family is deceased.

Her few known acquaintances show a distinctly cross-factional flavor, including a Dragon agent, Colt Moineau, and a Phoenician agent known as Alex. She has also regularly kept company with a male (or possibly transgender) prostitute who goes by the name "Glymmer." During her service to Temple Hall, Nell's handler was a man named Martial Childress, now an Inquisitor, who was assigned to her by Inquisitor Oscar Knowles.

Beginning in March 2015, Elsbeth Snow serves as priestess to Sandrijn DeJaegher, a minor deity, allied with the Illuminati, whom Nell refers to most often simply as "the Huntress."

Elsbeth is bisexual, and despite her generally anti-social nature, she's sexually precocious, often employing the services of prostitutes.

Elsbeth Snow is not a bee nor any other sort of immortal, and, as such, her supernatural abilities are limited. Though she is in good physical condition, her strength is not exceptional for a woman her age and size, and her albinism has left her with some notable weaknesses (light and heat sensitivity).

Currently, Elsbeth's only notable supernatural trait is her exceptional skills at mimicry, which seem to function largely via sort of mesmerism, acting on the unconscious mind and allowing her to persuade observers that she is, in fact, someone else entirely. She has, in the past, often enhanced this ability with costumes and makeup (she's become skilled with both) and vocal impersonation. Elsbeth Snow is not actually capable of shape shifting. It's all in your head. And some people seem harder to fool than others.

Please note that it is left up to the other player/character whether these abilities affect them.

Elsbeth Snow is fluent in German, French, and Ghūla (the language of the ghouls), and she knows a smattering of Spanish and Infernal.

Though skilled in Krav Maga and other martial arts, Nell prefers to avoid direct confrontation in combat, relying when possible on her mimicry, stealth, marksmanship, and extensive knowledge of poisons.