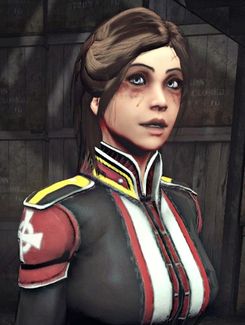 Previous roles include research as an Occult Gerontologist (concerning the diversity of immortal states in organic and inorganic forms), and counseling agents at Temple Hall with occasional cross-factional referrals.

She is a Chaos magician with heightened psychoempathic senses, possessing the enhanced physiology and revival factors of typical Bees. Elana expresses her Chaos magic in combat through physical arts of varying styles, from krav maga to capoeira. Has some skill in minor handguns, and Blood magic, but only on a macro, imprecise scale. Her highly sensitive nature has proven versatility in tracking missing persons and pacifying civilians and agents in combat situations, and is a fundamental aspect of working with Chaos, falling into brief fugues from elation to despair when activating sigils or invoking extradimensional doppelgangers.

Though generally open-minded with a kind temperament, Elana is highly reclusive and self-absorbed from the burden of processing extradimensional emotional energies. Though she would scarcely admit it in person, she relishes the opportunity to experiment with mind-altering substances and therapeutic quackery, or lengthy stays to spas and ashrams, to nurse her sanity.

Elana loves Greek cuisine after a lengthy research venture in Ikaria, an island known for the incredible longevity of its residents. Her 'callsign' is an obvious reference to the goddess Hestia[1]. Her favourite beverage in the Horned God is Myrrh Ale.

"Seeking to avoid violence we have made a virtue of suppression of anger. This damages the emotional constitution. Denying oneself anger, one loses all the rapture of love. Be ye men and women of great passions." -Peter J. Carroll, Liber Null & Psychonaut: An Introduction to Chaos Magic[2]

Within the darkest hallways of Temple Hall, a recursive sacrifice...

((This character faced a soft reboot post-TSW and her attunement to Chaos informs this.))

It is of multifactional knowledge that Elana has been chaotically altered or intervened with at least twice, once when Agartha shifted into its current form with a visible Seed of Life (and thus attuning her to the awareness of innumerable dimensions beyond her own), and a second time after a 'successful' deep undercover mission in an undisclosed location--advancing her Faction's knowledge over the course of a year, at the expense of suffering the behavioral effects of long-term isolation and brainwashing.

From new recruit to self-assured agent.

"Elana Drake", in any given encounter, retains the knowledge and temperament of the Original, but exponential complexities across realities mean that any memories of previous relationships are vague or fractured. The whispers of the Buzzing and her given faction Handler are constants that she must re-educate herself with, to avoid a psychotic break outside of Gaia's reach to mend.

Elana is known for taking many pictures, often self portraits--she does this to keep track of her current reality, and to leave a journal for any who may take Her place. 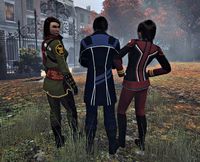 Elana Drake was previously affiliated with Hollow Earth Consulting, a multifactional agency. She operates either at her Faction's behest or independently, sharing cases with Evelyn DeKorte, a Dragon agent and fellow Chaos practitioner. She is affiliated with the Templar faction, but has never sought membership with any specific Templar cabal or company within.

Elana lives in a single detached residence with her husband, Robert Drake[3], on the island of Guernsey--close enough to London when needed, but far from the business of big city living. The crowded, daily emotional resonance of larger cities weigh too heavily on her senses for a reasonable quality of life.

Elana's characterization is at baseline, the core bee-to-faction agent experience with a few novelties.

In the Secret World universe, please enjoy the mission "Fierce Competition" in Kaidan, which informs how Elana detects and senses emotion, minus the colourful ribbons of the Astral Vision buff. Make sure to follow the 'wrong' paths of mission tiers, to listen to extra dialogue from Kan'ami.

Elana was named after Sylvia Engdahl's Elana series, an interstellar anthropologist of Enchantress from the Stars and The Far Side of Evil.