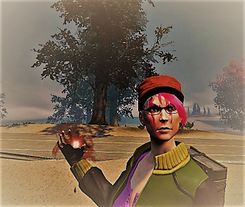 The Story: In the early 70’s Jorun Sandradottir Spare a chaos ritualist and daughter to Sandra Skaldermö, a skald and galder artist on Island and Austin Osman Spare an occultist most known for his work and development of idiosyncratic magic techniques such as automatic-writing, -drawing & sigilization. Theories and models that Peter Caroll would develop more in Libre Null a sourcebook of chaos magic & Malek Semtesz son of Iliona Semtesz and Juraj Nadasdy related to the infamous Ezrebet Bathory-Nadasdy. Gave birth to a girl at Karolinska Sjukhuset in Stockholm, Sweden. They named Dorotya Semtesz, a name to honour the old witch Dorottya Szentes that worked for Ezrebet Bathory-Nadasdy.

The birth carried heavy complications, the newborn child was lost to life twice of unknown reasons. But by miracle beyond reasoning the girl survived. The doctors said it was heart-problem that caused the complications, but no scars or any pattern of heart problem has been found on different scans later on. The parents would let that go and enjoy that they had a child that lived and grow.

Through the childhood, the parents notice that she was different from other children in the neighbourhood, school and what you have. They could get phone-calls from worrying teachers, telling how they have seen Dorotya spending most of her time alone in the schoolyard even drawn to the forest sometimes even coming late to class and activities. At the beginning the parents was worry, but later they would notice different characteristic features that led them to investigate the surrounding of their child’s birth.

Dorotya growed up in the suburban of Stockholm with both the wild natural jungle (forest and wildlife) and the concrete jungle with its own wildlife. In her early age she spent lot of time outside in nature, the parents let her sleep in tent on their backyard or even at the edge of the forest (that bordered to their house) Sometimes they would find her in the morning sleeping outside the tent but never cold, never soaked even if it had rained. Dorotya had very few friends, she was an outside. Society view up on this Dorotya would see her working as a cashier at a local clothing store, they would see her drifting through the city in the late night hours, seeing this slightly awkward androgynous person at night café reading or writing. In her teens she was often laughed at and target for bully, they mostly bully about her “unnatural slenderness”, the long fingers as if they had an extra joint, the scar on her lower back which no-one knowed what it was. No hospital-files has anything to say as it has been there since her birth. Her androgynous features.

Dorotya would with her parents travel alot, mostly between Sweden, Iceland and Romania but the parents work sometime took them to Japan, China, Korea, Africa and America and so on. Her parents worked for insurance-companies that had HQ’s all over the world. Not being complete rooted, Dorotya study archaeology and later in her life become an archaeologist in that she could study other that was rooted, had a certain place, culture, ways and so forth. Then one evening she vanished.

The untold Story: The parents Jorun Sandradottir Spare and Malek Semtesz understood that something was not quite right with the birth of their daughter. But they were content that their child had survived and lived. As Dorotya grow up and they would start to see this characteristic oddities that mostly different with other children, they started to suspect that perhaps this was not their child from the beginning, well not biologically. Being part of the Dragon, the mother a chaos ritualist and theorist and the father a historian, they began to investigate and pull strings here and there. What they would pull out from the shadows was not quite what they had expected but was not surprised either, in fact they were honoured that they had been choosen.

When Juron gave birth to their biologiccal child, this death happened twice because of events already planned out on a much grander scale. The wet-nurse that worked there was a Huldra, around those years there was a couple of children that was switched with Huldre children. The wet-nurse known as Sara Norrbacka. In early 70’s they started to build what would later be known as South link, a national road 75 in Stockholm. That building was put to ice by financial problems, a creation made by the Dragon in Stockholm to protect the Hulder people that lived deep under Stockholm, which they did after all the modernising of the city. Just before the start, gas-leak (which was the reason Dragon pulled the strings in finance) was about to kill the Hulder people, some says that this leak was actually the Templar doing in the name of christ destroy the old people. The wet-nurse Sara Norrbacka did everything she could to help her people. By taking this children and switch them with human children that died in birth, she helped the Hulder people and gave a mother and father a child. That is what Dorotya Semstesz is, a changeling. A huldre born and hibernated in a freezer in the old parts of Karolinska hospital, deep under the cellar of the new modern hospital. As Sara was waiting for the right humans to give the child away to.

Sara Norrbacka would have them first taken to a ceremonial room at Blåkulla (The Brocken) in Solna a couple of miles north of Stockholm, close to Karolinska hospital. In a ritual the tail is cut off, with a special tool, then taken to freezer under Karolinska to hibernate till the right moment, right humans. As time past she would switch the Hulder children with the dead human child to good parents, that she know would give the changeling a good childhood. Like Jorun Sandradottir Spare and Malek Semtesz. Who would investigate in this 10 years later, when they notice how much Dorotya was different to other children, and when Jorun was starting to teach Dorotya chaos magic.

Dorotya would in her late teen stroll and prowl in Stockholm at late nights. Where she interact with other changelings, learning the whispers of chaos. The Dragon was watching her, perhaps the path was tailored perhap it was accidents or it even might have been written in the stars and stones by the old blood. By the time she had reached her 20ish something, she was educated archaeologist, and well educated in the arcane lore of chaos. She still spent lot of her time in Stockholm, helping hobos and like that with soup-kitchen, driving around the city, crawling deep into the tunnels under the city to help those outcast and specially her own people that perhaps hadn’t got lucky with the changeling life.

The Dragon was in the background all the time, she had have her glimpse and had always been in the outskirt of the outer circles because of her parents being part of the Dragon. One night in ST Petersburg she was helping those less lucky when she stumbled up on a group of people, Templar she later learn. Who was raiding hidden faerie homes. That night ended with a huge explosion, Dorotya still hasn’t complete memories of that event, but it lead to that she would stand face to face with the Dragon in Seoul. It was said to her that she burst when she had cast Blood Hexen and tried to twist reality’s tapestry. The chaotic pattern had destroyed the Templar, thrown the faeries into alternate reality and destroyed a metro station, 14 killed. The Dragon made it look like a suicide bomber, this happen in april 1995.

Since that day Dorotya went into a training at the Dragon's path, tuned her powers of chaos and blood magic. Here she have learned more about herself, the arcane and esoteric knowledge.