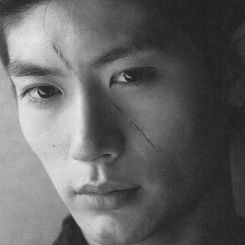 Daisuke looks to be in his mid-20s, a Japanese man of around average height, leanly muscled from years of physical training. He is clean shaven, rarely sporting more than a five o'clock shadow, and even then only when he's been unable to shave. His black hair is habitually worn bound at the nape of his neck; if it was to be seen loose, it would fall to his shoulders.

Perhaps his most striking features are his eyes - a piercing, steely grey unusual for one of his ethnicity, and the scar that runs diagonally across the bridge of his nose to terminate on his left cheek. It's an old wound. Older than it looks. He has a few other scars on his body - most notably one on his right thigh and one on his left side, below his ribs.

In repose, his expression tends to look somewhat dour - he's wont to frown, and he has what people would describe as 'old eyes'.

Though he looks serious, even stern, at first meeting, it's a thin veneer. He takes his duties seriously, but in reality he's softly spoken, tender hearted and kind, with a gentle, teasing sense of humour. He loves the arts, has a surprisingly good singing voice, and is excessively fond of cats.

He's very private though, and rarely offers much in the way of details about his past. In fact he'll go out of his way to avoid talking about it, preferring to keep the topic of conversation centred on the here and now. 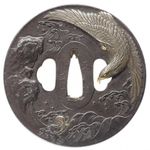 Katana - immaculately cared for. The tsuba depicts a falcon in flight over a stormy sea.

A bracer featuring a hidden blade, and the same dragon scale mon in silver. It's been jokingly suggested it looks 'like something from Assassin's Creed'. He's not amused by the comparison.

If pushed, Daisuke will offer only a bare-bones version of his history, omitting any particularly personal details. He'll even go so far as to say he 'can't remember' events that happened years ago, pointing out that human memory is finite, even if his lifespan might not be. Whether or not that's true is open to debate. Enquires about the people he has loved and lost will remain unanswered - though he wears a wedding ring, and is given to twisting it on his finger when pensive or deep in thought.

In reality, Daisuke is more than 400 years old. Born in 1569, he was one of the many men who served the daimyo Date Masamue. Destined to live and die unremarked by history, Daisuke was unfortunate enough to intercept a potentially poisoned meal destined for the table of his lord. It wasn't poison, it was worse - Ningyo flesh. The first sign that something was wrong was the speed at which his wounds began to heal; lacerations that should have proved fatal not even leaving a scar behind as a reminder. As the years rolled on, it became apparent that he was no longer ageing either.

For a time, necessity saw him rubbing shoulders with the criminal underworld - one finds oneself in need of forged documents when one's apparent age and actual age are so at odds; doubly so when death should have happened decades ago. Unbeknown to him, the Dragon was watching and its agents reached out to connect him with the Secret World and the inhabitants who could help him keep his condition under wraps.

A samurai through and through, however, their chaotic tendencies did not sit well with him, and he drifted on. The Dragon didn't try particularly hard to keep him - a variable in one of its equations, perhaps. In time, he fell in with the Jingu clan, finding their ethos much more to his liking, and eventually he was dispatched to London to serve with the Templar as a kind of quid pro quo for past cooperation. He's never seemed entirely comfortable in London. 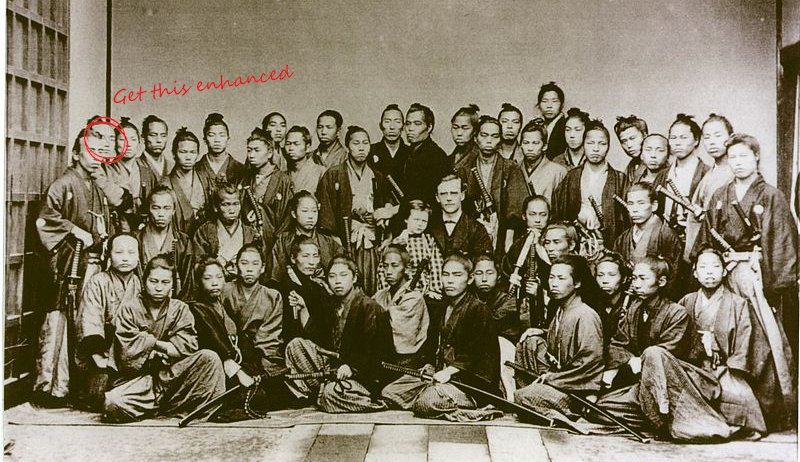 Daisuke is a skilled swordsman. Though he lacks the ability to manipulate anima that the Gaia Chosen have, he's still exceptional - as one would expect with more than 400 years of training and experience under his belt. He has no talent for magic.

Daisuke speaks Japanese, English and Italian (though his player only speaks English).

As well as stopping his physical ageing, his immortality manifests in a strong resistance to disease and accelerated healing, including that of injuries that should kill a mortal man. He speculates that decapitation would kill him - but that might just be because he's seen Highlander too many times.

Templars may have heard him mentioned around Templar Hall as 'the samurai on loan from the Jingu'. By the same token, Jingu Clan members in Tokyo may mention that one of their own is currently living in London as part of a quid pro quo deal.

He habitually turns his wedding band on his finger when deep in thought - it's hard not to notice it.

He's an excellent swordsman, but his way of handling a blade doesn't quite fit with any modern form of kenjutsu.

Daisuke always carries a small leather-bound journal with him. In quiet moments he can probably be seen writing in it - especially in the evenings. He's very protective of it.