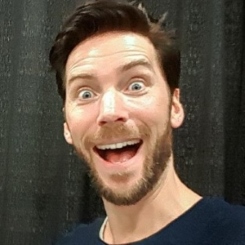 Caomhan Keith MacBradaigh was born on November 17th, 1988. His mother Paula is a pianist, and his father Charles is a doctor. His older sister Siobhan is a psychiatrist. The first five years of his life, Caomhan lived in Dublin, Ireland with his family. They then moved to Vancouver, Canada.

Growing up, Caomhan discovered a talent and passion for food, and after graduating from high school, he studied at the Northwest Culinary Academy of Vancouver. There he built a reputation as a new food prodigy, displaying work ethic and practical skill far surpassing those of his fellow cooks. At age 19 he graduated with a Combined Professional Diploma, and immediately began working in Vancouver's top restaurants. To this day he has about eight years of experience in them.

He claims that Vancouver "doesn't have the best reputation when it comes to 'real' fine dining," but rather than abandon it, he aspired to change the city's food scene for the better. However, becoming one of Gaia's chosen and being recruited by the Templars has forced Caomhan to abandon his aspirations.

Caomhan's anima is rather unusual. His bee provides him with adequate amounts of magical firepower, though he has a natural aptitude for chronomancy in particular. Caomhan is able to freeze small areas in time, and place items into stasis -- an ability he sometimes uses for food storage. Such magic technically falls under Chaos Magic, which is typically characterized by complex mathematical equations, but Caomhan has found a way to make it simple and intuitive for him. His control over time is an ability he uses sparingly in combat; he prefers to use his pistols to defend himself.

As for defenses, Caomhan's bee is much more picky and choosy -- it provides sufficient protection from the Filth, but it seems to let mortal human illnesses slide, and therefore Caomhan will suffer from viruses, the common cold, et cetera. Ultimately, Caomhan rarely sees direct combat if not in a group.

Since his recruitment, Caomhan has voiced feelings of missing home, saying his "place is in the kitchen, not out in the field." However, he has shown no instances of insubordinate behaviour.

Caomhan has blue-green eyes, fair skin tone, and naturally brown hair. He has a lean figure, standing at approximately 191 centimetres tall and weighing about 76 kilograms.

He calls himself a "simple-minded chef," and that holds true for the most part. Despite the intricacies that can be found in his culinary work, Caomhan's language and mannerisms are straightforward in contrast. Jokes, innuendos, and euphemisms tend to fly right over his head, and thus one would do well to be upfront with him. He's honest, respectful, and down-to-earth, never meaning any harm.

From March to July 2017, Caomhan was in a romantic relationship with Stefan Dalca.

Caomhan had a short love affair with Allen Roderick in August 2017.

Two notable affiliations of Caomhan's are Peter Harkem and Theodore Cardon. The three used to be housemates. In particular, Caomhan used to work with Theodore in an upscale restaurant.

Some time after Caomhan was recruited by the Templars, his parents provided a document describing the genealogy of the MacBradaigh family. It claims that the MacBradaigh bloodline can be traced back to the Tuatha Dé Danann, a semi-divine race in Irish folklore. However, none of their ancestors were notable nor influential figures, and there is not much evidence to support these claims aside from the document itself. Even if they were true, the MacBradaigh bloodline's ties to the secret world are minor at best. The MacBradaighs have been born and raised in the mundane world for many generations, and while they know of their ties to the secret world, they have kept quiet about them.

On the other hand, the fact that Caomhan has semi-divine blood may be linked to his unusual anima.

The new chef prodigy, the new gastronomic genius. Caomhan zoomed through culinary school and skyrocketed to the top of Vancouver's culinary scene, taking his place among the city's best culinary artists. However, considering Vancouver's mediocre fine dining scene, he isn't all that much compared to the likes of Gordon Ramsay. Even so, Caomhan is a mastermind in the kitchen. He's got the potential to become one of the world's greatest chefs, but the bee he swallowed has different plans for him. He misses his home -- the kitchen -- but he's got work to do with the Templars before he can return. On the bright side, he gets to travel and learn more about food from all over the world.