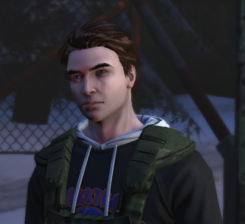 Tall, Thin and somewhat lanky, Bennit has a youthful quality and appearance. It wouldn't take much of an investigation to realize he hasn't been part of the secret world for long.

He generally can be found wearing casual skater clothing and club wear unless the occasion is formal or tactical. Most wouldn't suspect him of being a Templar Agent simply from his age and lack of formal attire.

Although his primary weapon is a sword, Bennit is never seen carrying one with him. The only weapons he carries are military sidearms.

His early life was spent in a suburb of Chicago. He was the only child of a single mother and his father was unknown. Surprisingly, Bennit has acquired an impressive amount of knowledge about the Occult. Left-hand path followers were common in his hometown being as it held the largest Theosophical library in the world. Bennit usually came across them working at his part-time barista job at a cafe.

He also is well versed in Catholicism having regularly attended events and services at a specific local parish although he never had any roles during masses. It was also a place he stayed while his mother worked, spending time with staff and the parish priest.

Him and his mother's move to New Hampshire was organized very quickly and without much notice. Catholic Diosconal records show a priest from Bennit's church transferring to a parish in that area several months earlier. A parish Bennit eventually attended. The priest's name was Ben Chauntilles.

Council of Venice case #T-59 - "Received transmissions in our etheric broadcast equipment. Some type of signal although it's properties aren't common even for our field of study. It's constant but can only be heard once. Not in a loop. I tell you, Sergio, If you fix your equipment to the right frequency you'll hear it too. It will always play. It's backwards. Going back in time to another age... Or maybe coming from it to now, i don't know. Time is different there. It took us a while to figure it out but it's in Ancient Hebrew. Our translation is sketchy but we think we're close.

'Not all of the brothers sought Enoch's intersession. One was wise enough to carry the burden of his sin. Azazel and his company demanded redemption and received punishment for themselves and their children. Zachariel alone bore the burden of judgement of his own will. Zachariel will be given charge of fashioning his own return from amongst his own descendants and from that multitude, when all that is divine within them is most faint, I saw a redeemer.'

'Brothers' is off in the translation. Closest we could get. It's in reference to sons. Bene ha Elohim. Sons of Heaven. The Angels. We'd be wise to not keep this on the shelf too long."